You are here: Home / Blog / The 19th Hole: ‘Anchored’ Putting May be Thing of the Past
This post may contain affiliate links or mention our own products, please check out our disclosure policy here.

by Rick Stedman
December 1, 2012Filed under:

The official bodies of golf – the Royal & Ancient (R&A) and the United States Golf Association (USGA) – are preparing to unveil a new rule change that would outlaw anchoring the club while making a putting stroke. Though anchoring of the putter has been allowed for the last 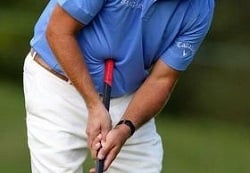 20 years, and it has been used by winners in three of the last four major golf tournaments, many opponents of anchoring are in favor of the proposed ban.

PGA pro Graeme McDowell, the 2010 U.S. U.S. Open champion, is a strong advocate for banning long, or belly putters. “Let’s get everyone with a short putter back in the bag as the game is meant to be played,” said McDowell recently. “It’s just kind of a physical fact that if you can just take one element of movement and motion out of the stroke that holing putts will become easier.”

Anchoring the putter to the body is clearly not allowed, according to the current rules, as McDowell suggests. Also, long putters tend to remove any anxiety (read: yips) since the putter is essentially guided with the golfer’s hands. Given those facts and the usual “by the book” approach of the R&A and USGA, a change to ban anchoring should be forthcoming.

What the R&A and USGA are specifically focusing on is Rule 14-1: Ball to Be Fairly Struck At – The ball must be fairly struck at with the head of the club and must not be pushed, scraped, or spooned. The penalty for breach of this rule is loss of hole for match play or two strokes for stroke play.

With this very specific language already in the rule book, it would seem fairly obvious that a rule change is inevitable. In a joint statement a few days ago, the R&A and USGA’s proposed rule change would prohibit strokes made by anchoring the club. However, the proposal would not alter existing equipment regulations which allow for the use of the so-called belly or long-handled putters. Basically, you can use the putter, you just can’t use it anchored to your body. Confusion: Oh yeah. Compliance: Who knows?

“Throughout the 600-yearhistory of golf, the essence of playing the game has been to grip the club with the hands and swing it freely at the ball,” said USGA executive director Mike Davis in a joint statement issued with the R&A. “Our conclusion is that the Rules of Golf should be amended to preserve the traditional character of the golf swing by eliminating the growing practice of anchoring the club.”

The governing bodies of golf will consider any further comments and suggestions from throughout the golf community. If officially adopted, the rule change banning anchoring the club would take effect on January 1, 2016.