You are here: Home / Blog / 11 Popular Places to Discover Presidential History
This post may contain affiliate links or mention our own products, please check out our disclosure policy here. 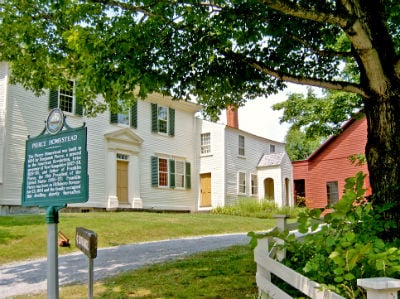 It seems appropriate in this election year to talk about some of the historical sites of our presidents. There are too many for an in-depth conversation so let’s discuss the ones I’ve visited. These vignettes tell bits and pieces. Be sure to conduct further reading through books or the Internet to get the rest of the story of all of our nation`s Presidents.

Calvin Coolidge, our 30th President, was our only president born on the Fourth of July. I visited this State Historic Site complex in Plymouth, VT, on the Fourth. After a service in the 1840s Congregational Church commemorating his 132nd birthday, we followed the Vermont National Guard to the cemetery for a ceremony. A Coolidge grandson and two great grandsons were present, continuing family history. If not for the presidential seal on the head of the tombstone, one would not know a President was buried there.

At the very top of Vermont, on a lonely, rain-pocked gravel country road, I visited the 21st president’s residence at the Chester Arthur State Historic Site. Where and when he was born seems questionable, but he lived in this tiny frame house shortly after birth. Historians now believe that was 1829 rather than 1830. I suppose he was unimpressive at that age and nobody cared when he was born except his parents, who had a seventh mouth to feed.

rossing into New Hampshire took me to the Franklin Pierce Homestead National Historic Landmark, where our 14th President spent his boyhood in an 1804 mansion. It is a good example of what I call “connected housing.” New England winter weather is decidedly nasty. They connected their houses and all the outbuildings together so they didn’t have to go outside to do chores and the animals provided some heat. 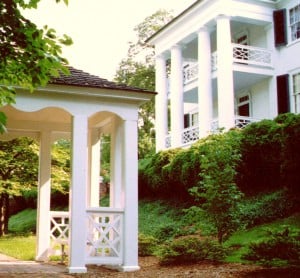 Woodrow Wilson was born in a twelve-room Greek revival manse in Staunton, VA.

The Pedernales River flows between the Lynden B. Johnson (LBJ) Ranch and the LBJ State National Historical Park and beside the house where our 36th president was born. Mrs. Johnson remarked on the day he was born, “Lyndon Baines Johnson just discovered America.” That’s typical tall-tale Texas thinking.

Dwight David Eisenhower was raised in a typical prairie-town home in Abilene, KS, on the “wrong side of the tracks,” but he did good. The West Point graduate became a U.S. Army Chief of Staff, Supreme Allied Commander of NATO, signed the bill to form NASA, and established Alaska and Hawaii as our 49th and 50th states. The Abilene Eisenhower Complex houses five galleries of family memorabilia.

Near Plains, GA, the home territory of our 39th President and Nobel Peace Prize winner, James Earl Carter, Jr. , tours began at B.J.’s Pitt Stop, formerly Brother Billy Carter’s gas station. The NPS ranger said, “The Carters eat dinner in local restaurants despite hundreds of threats on his life every year. Rosalynn is more approachable. The former president isn’t into small talk.” In 2016, at almost 92, the ex-president is still hanging sheetrock and framing windows on Habitat for Humanity projects.

Our 28th president, Woodrow Wilson, was born in a twelve-room Greek revival manse in Staunton, VA. According to our guide, “Woodrow Wilson had dyslexia but with an IQ of l70 and home tutoring, he overcame the problem.” One of his sayings was, “A man’s rootage is more important than his leafage.” 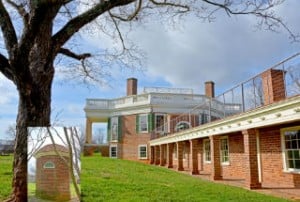 New York-born Theodore Roosevelt suffered extreme childhood asthma and eventually traveled west to experience a healthier “cowboy” lifestyle. His love of the badlands prompted him to buy two ranches in far western North Dakota that would ultimately become the north, south, and Elkhorn Ranch units of Theodore Roosevelt National Park. The Maltese Cross Cabin was his special hideaway where he wrote about his ranching days. Theodore Roosevelt was not only our 26th president, but with the assassination of President McKinley, at 42 he was our nation’s youngest president.

Abraham Lincoln was born on “Sinking Spring Farm” in Hodgenville, KY. When he was two years old, the family moved to Knob Creek Farm and ultimately the two separate farm sites became the Abraham Lincoln Birthplace National Historical Park. Lincoln was mostly self-educated and apparently not all that successful in business. Nonetheless, he became a lawyer and eventually was elected as the 16th U.S. president. His first day in office was March 4, 1861. He carried the worries of the Civil War until an assassin’s bullet ended his life on April 15, 1865, six days after Lee surrendered to Grant at Appomattox Courthouse, VA.

On a mountaintop near Charlottesville, VA, Monticello is one of only two houses Thomas Jefferson designed for himself, but not many people are aware of his favorite get-a-way in Lynchburg, Virginia, Poplar Forest. Thought to be his most creative, and the first octagonal residential building in the country, the octagonal theme was carried through even to what may be the original “brick outhouse.” In addition to his building designs, Jefferson was well known for his landscape architecture, horticulture experimentation, and other little things like authoring the Declaration of Independence and being the third president of our country.

I was most impressed with the ultimate presidential hangout on a mountainside in South Dakota. You cannot beat the awesomeness of listening to the Star-Spangled Banner while looking up to the moonlit carvings of Mt. Rushmore where our 1st president, George Washington, is hanging out with three of his peers, Thomas Jefferson, Theodore Roosevelt, and Abraham Lincoln.

So there you have it, a few of the presidential “hang-outs.”

Winter in the Wilderness, Sharlene Minshall’s first novel (e-book & hard cover), and the fourth edition of RVing Alaska and Canada are available through Amazon.com.