You are here: Home / Blog / 2015 U.S. Open Recap
This post may contain affiliate links or mention our own products, please check out our disclosure policy here. 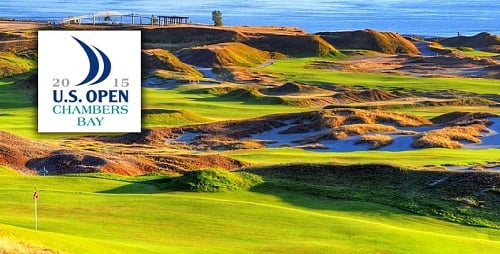 Though the United States Golf Association prides itself on tradition, there were lots of new wrinkles and twists added to the recent U.S. Open that concluded last Sunday on Father’s Day at Chambers Bay in Washington State. Of course, the continual grousing about the greens by players got the attention of USGA officials, and no doubt will get some attention if Chambers Bay hopes to be in the running for a future U.S. Open, and many think that will happen.
The lack of proximity to players for fans was also an issue. However, the USGA deemed it necessary for safety reasons to limit how close fans could get to the 156 professional golfers who started the tournament. Their reasoning was sound, due to the slickness of the fescue grass. Despite the restrictions, players, caddies, and numerous fans found themselves on their backsides throughout the week-long event. While standing above the 10th green, I watched Tiger Woods slip and fall just before chipping his ball off the hillside. Also, two caddies went down: One with a twisted ankle that prevented him from continuing in the tournament; the other caddie fell and hurt his wrist, though he was able to continue.
Despite a few challenges like access to players, patrons still seemed to enjoy themselves in this once-in-a-lifetime event for Northwest golf fans. Some even dressed for the occasion. I saw several visitors dressed like golfers from the early 1900s, while some came in themed outfits, like the foursome from Missoula, Mont. who were decked out in red, white, and blue attire.
The creativity didn’t end there. On Friday morning about 9 a.m., I was walking up a steep incline to a tee box with roughly 30,000 of my closest friends. The young guy next to me was on a cell phone, and I heard him say, “Hey, I can’t talk right now, I’m about to go into a meeting. I’ll call you later.” I looked over at him and smiled, and the look on my fact obviously begged for an explanation as he said with a huge grin while throwing his palms skyward: “Hey, it’s the U.S. Open!”
All in all, this was a fabulous event, and the USGA is to be commended for its stellar attention to detail in every aspect of the tournament.