You are here: Home / Blog / Two Top Books Earn The 2016 Herbert Warren Wind Book Award
This post may contain affiliate links or mention our own products, please check out our disclosure policy here.

In a rare move, the United States Golf Association selected two books instead of one to receive the 2016 Herbert Warren Wind Book Award for the best golf book of the year. 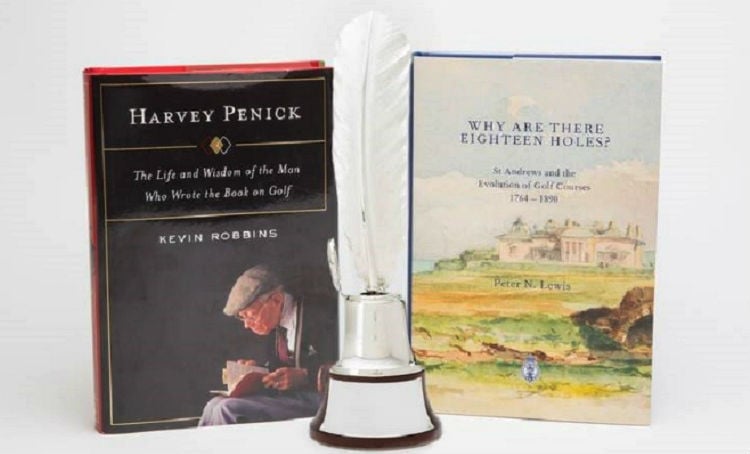 For example, the first book is the “Harvey Penick: The Life and Wisdom of the Man Who Wrote the Book on Golf,” by Kevin Robbins; and “Why Are There Eighteen Holes? St. Andrews and the Evolution of Golf Courses, 1764-1890,” by Peter Lewis.

“It’s not likely to happen again but after much discussion, we decided that two books are worthy of the award,” says Adam Barr, director of the USGA Golf Museum. “Each contributes something distinct and valuable in terms of research and narrative style. These are two attributes that always rank high in our deliberations.”

In “Why Are There Eighteen Holes?,” Lewis takes readers on a journey from 1764 to 1890. He draws evidence to answer how and why 18 holes became the ideal number for a golf course. In addition, the author traces how and why people call St. Andrews the ‘metropolis of golf’. He also inquiries as to why the Royal and Ancient Golf Club is a governing body of the game.

Why these are Popular Reads

Kevin Robbins’ biography of Harvey Penick was sure to gain attention from the golfing world. Many would fondly remember Penick’s 1992 “The Little Red Book.”

“Harvey Penick wrote one of the bestselling sports books ever in ‘The Little Red Book.’ Further, his life and the book are both subjects deep enough to be worthy of the award,” says Barr. To that, Robbins added, “Harvey Penick spoke to so many people through the words in his ‘Little Red Book.’ I want readers to understand what golf actually meant to Harvey.”

The Herbert Warren Wind Book Award was established in 1987. It recognizes outstanding contributions to golf literature while attempting to broaden public interest and knowledge of the game of golf.

The USGA is currently accepting submissions for the 2017 Herbert Warren Wind Book Award. To be eligible, a book must be an original full-length work about golf. It must also be written in English and published between November 2016 and October 2017.