You are here: Home / Blog / Trapper Creek Mining Camps in Montana
This post may contain affiliate links or mention our own products, please check out our disclosure policy here.

In the last installment we looked at several places to set up base camp while exploring the historic remains of several mining camps to the west of Melrose, MT. This week we will visit the sites of Hecla, it’s once rowdy neighbor Lion City and what is left of Trapper City all located along the headwaters of Trapper Creek.

All three mining camps had their beginnings in the 1870s when rich ore was discovered on Lion Mountain. The first mining camp to be established was Trapper City, which established a post office in 1873. Quickly, the camp boasted a hotel, several saloons, a brothel, general store, butcher shop, livery stable and numerous cabins lined up and down Trapper Creek. The settlement reached a population of nearly 200, but was short lived, as mining began to move up onto Lion Mountain.

Also growing was the new camp of Lion City at the base of Lion Mountain and by 1878 almost everyone had abandoned Trapper City in favor of Lion City. Trapper City’s businesses followed the residents with Lion City soon boasting three saloons, two brothels, two hotels, several retail businesses, a school, mining buildings and numerous cabins. At its peak, Lion City had a population of 500 to 600 people, consisting mostly of miners and merchants. 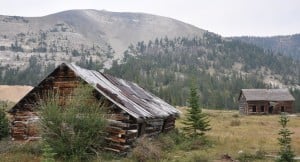 In 1881 the Hecla Mining Company reorganized their mining efforts in the area founding the town of Hecla a short distance above Lion City. The primary reason for the new town was to remove the miners from the saloons and brothels available in Lion City along with providing easier access to the mines. The town grew to an estimated 1,500 to 1,800 individuals and included boarding houses for the miners, a water works, fire protection, a church, a school for 200 students, company offices and other businesses.

Unfortunately, the mining district was hard hit when the Sherman Silver Purchase Act was repealed in 1893. Though operations continued on a smaller scale over the years, the ore was dramatically played out by the turn of the century. The company’s major producing mine, the Cleopatra, shut down in 1895. All told, nearly $20 million was mined from the area mines over the years.

To get there and visit: Travel west from Melrose on Trapper Creek Road to the remains of Glendale (which we will visit next week). At the fork in the road in Glendale stay left along Trapper Creek on Trapper Creek Road for about 3.25 miles to the end of the maintained forest service road at N°45 38.993 W112°50.663 There are several nice boondocking campsites along the creek at this point if you want to drive your RV this far. From this point to the mining camps (5-6 miles) the road is not maintained with four wheel drive or ATV travel recommended.

If you require the basic necessities of an RV Park there are some options available in Melrose and explore the mining towns on day trips.