You are here: Home / Departments / RV Industry News / Rollin’ on TV and NERVDA Partner to air show in New England
This post may contain affiliate links or mention our own products, please check out our disclosure policy here. 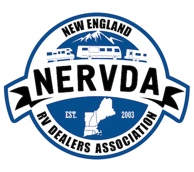 One of the nation’s most popular consumer RV show, Rollin’ on TV has recently partnered with the New England RV Dealers Association (NERVDA) to launch the program on the New England Sports Network (NESN), which will be delivered to more than four million homes throughout the six-state region and nationally as NESN National.

Produced by Jose Moniz in his Mattapoisett, MA., studio for five years, Rollin’ on TV is a weekly half-hour RV and camping lifestyle program that airs on cable, as well as The Dish, and Direct TV networks. It can also be seen on various stations around the U.S. including ABC, FOX, CBS, WB, MyNetwork TV, and COX TV, as well as independent stations and major regional sports networks including COX Sports, Altitude Sports and MIDCO Sports. This will be the first time the show will be aired in New England.

“We are ecstatic to finally have this great show available for RV enthusiasts throughout New England,” said Bob Zagami, Executive Director of the NERVDA. “With the support of four great dealers, we are now able to sign contracts and have Rollin’ on TV visiting their locations to shoot their ads. Their vision and commitment to this show have been the driving force to bring Rollin’ on TV to new prospects and showcase their dealerships beyond their traditional marketing programs.”

The four dealers participating in the launch of the show includes Forrest Marine & RV Center of Tyngsboro, MA, Scott’s Recreation in Manchester, ME, Seacoast RVs in Saco, ME, and Campers Inn RV, which has four locations in New England including Manchester, Kingston, NH., Raynham, MA., and Union, CT.

“As a New England-based company, this has been a television market we’ve wanted for some time but getting airtime on a station/network that covers all of New England is difficult,” added Moniz. “This new partnership with NERVDA has enabled us to put this program package together with NESN and we’re definitely looking forward to our air date of May 19th.

Dates and airtime information are available on the show website on the TV Schedule page. www.rollinontv.com.

Stay tuned as shooting for the program at dealerships begins late March and will start airing in May.