You are here: Home / Blog / RV Travel Tales: I See the Moon, the Moon Sees Me

We watched Big Bend disappear in our rear view mirror, and journeyed to Fort Davis, Texas, for a scheduled stop at McDonald Observatory. Ahead of our visit, we had booked a daytime tour of the observatory on Thursday, a “Star Party,” on Friday evening, and a Lunar Viewing on Saturday night.

Fort Davis is a small vintage town, the county seat of Jeff Davis County. We found an RV site with full hookups, cable TV, and Wi-Fi at a local motor inn.  From our motorhome windshield, we gazed out at a russet red mountainside, part of the Davis Mountains.

On Thursday afternoon, we traveled sixteen miles to McDonald Observatory for our first tour, hosted by a knowledgeable host. We climbed higher into the Davis Mountains to the sprawling facility located on Mount Fowlkes and Mount Locke. McDonald Observatory is campus property of the University of Texas in Austin.

In the theater of the Visitors Center, we first viewed a visual presentation about the sun, narrated by our host, Judy. Our heads filled with information we had once learned—or perhaps, had never known.

Our host told us that the Otto Struve Telescope was the first to be built at the McDonald Observatory back in 1939. I noted its construction in my birth year. Its 82-inch mirror was the second largest in the world at the time. However, when we boarded a shuttle for a ride up Locke Mount, we skipped the oldest telescope and drove to the white dome of the Harlan J. Smith telescope, built in 1968. In the unheated tower room that houses the 107-inch telescope, Judy explained its features and permitted various ones in the group to manipulate the giant telescope with a switch on a small black box.

She stated that the Davis Mountains are an ideal site for astronomical research because of the clear dry air, moderately high elevation, and the remoteness of the area. Indeed, the numerous telescopes stood under a bright canopy of blue.

Next, she drove us to the Hobby-Eberly Telescope, constructed at less cost (in today’s dollars) because its primary mirror consists of 91 hexagonal pieces of glass, fixed at 55 degrees above the horizon. The telescope mirror does not move to track the night sky, yet the instruments at the focus allow a single target to be tracked for up to two hours. This telescope allows access to approximately 75 percent of the nighttime sky at its location. Judy explained that astronomers from the University at Austin and other universities around the world schedule time for research on the different telescopes. They do their work at night, and sleep in on-site accommodations during daylight.

We returned to the observatory on Friday evening for a “Star Party.” A different host led us first to the outdoor amphitheatre. In the twilight, he pointed to various constellations with a laser. Following his presentation, we had the opportunity to move to various telescopes set up on the walkway and view constellations and Venus.

Late on Saturday afternoon, we returned for the three-hour lunar viewing. Our host, astronomer Rachel, briefed us on the surface of the moon and led us through some activities to demonstrate how objects in the universe bombard the moon and create craters. We huddled inside the circular building enclosing the telescope, layered in clothing to ward off the cold night air. Rachel presented black and white photos of the moon’s surface on a large screen, orienting us for what we would see through the telescope. One by one, each person in the group stepped up to the lens that brought the moon as close as our faces.

As we drove away from the observatory in the dark night, I felt like a tiny speck in comparison to the vastness of the universe. Then I saw the moon and I knew the moon saw me—no matter where I happened to be on this earth. Despite its mysteries and phases, we all see the same moon wherever we travel. Somehow, that comforts me. 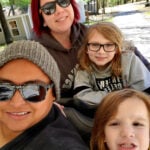