It’s rare to find a business still operating in the same building and in the same location 135 years after it first began. The Hubbell Trading Post, though, is still going strong, and is especially unique because it is in the midst of the Navajo Nation near Ganado, Arizona. This national historic site is open to the public and you really can still buy or trade for coffee, flour, or a beautiful Navajo rug or Hopi basket. You can also tour the Hubbell homestead, and learn more about John Lorenzo Hubbell, his family, and the Navajo Nation through exhibits, information, and books found inside the Visitor Center.

Trading is a custom that has been practiced since the beginning of time and usually does not involve money— instead, it is a way for one person to give another person something of value and receive something else of equal value in return. In the late 1800s, trading posts in the American Southwest were not only convenient places to conduct this type of non-cash business, they were a necessity to the Navajo and many other tribes such as the Hopi and Zuni.

When the Navajo returned to their native homeland in 1868 following their brutal Long Walk four years earlier to Fort Sumner in New Mexico Territory, they returned to nothing. Their hogans, livestock, crops, and former way of life were gone. Instead, the 8,500 Navajo who had survived the ordeal now had to depend on the U.S. government to provide them with just about everything to start over on the newly created Navajo Reservation. Unfortunately, these provisions were inadequate, so trading posts filled the need for crucial supplies.

John Lorenzo Hubbell was not only a trader, but he became a respected friend to the local tribes and acted as their liaison to the outside world. Mr. Hubbell translated, explained government policy, settled quarrels, and created a demand for quality Navajo weaving and crafts—all while respecting the Navajo traditions and culture. He also turned his home into a hospital during a smallpox epidemic in 1886. 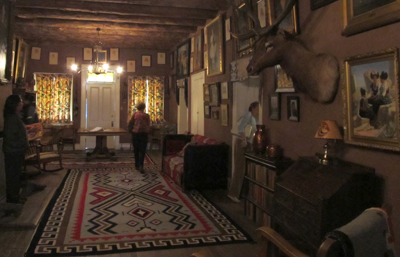 Mr. Hubbell died in 1930, but the Hubbell Trading Post stayed in his family until 1965, when it was sold to the National Park Service to be preserved, and with the understanding that it would always remain a working trading post. Today, as in 1876, American Indians bring handcrafted rugs, jewelry, pottery, and baskets to the trading post. Locals buy groceries here, too. Visitors are invited to stop in, browse, and take home a beautiful souvenir of American Indian artwork.