You are here: Home / Blog / RV Travel Tales: Explore Oregon’s Tidewater Country
This post may contain affiliate links or mention our own products, please check out our disclosure policy here. 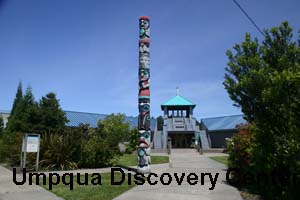 Oregon is a world away from Arkansas. Crashing waves against sandy beaches, harbors, ships and fishing boats. Bays, lighthouses, the smell of salt air, starfish scattered on a beach, rain forests, and more rainfall then sunshine. For the six weeks we spent in the west coast state, we took every opportunity to absorb the sights, sounds, smells, and tastes, along with Oregon’s history.

One day, we drove to the small town of Reedsport to visit its Umpqua Discovery Center, located on the Umpqua River that runs through the town. The Industrial Totem Pole outside depicts in Indian symbols the story of International Paper Company, honoring the company’s contributions to the economy of Reedsport.  The Center is accessible via a boardwalk along the beautiful Umpqua River Waterfront.

I was impressed with the cultural history exhibits: “Tidewaters & Time”, that tells the unique history of a town where daily life revolved around whether the tide was coming in or going out, and “Pathways To Discovery–Exploring Tidewater Country.” The natural history wing is designed as a simulated landscape representing Oregon from sea level to the peaks of the Coast Range. The exhibit is essentially a trail with landings for viewing interpretive environments.

The Discovery Center is one of the most beautiful and effective museums I have encountered in my travels. The murals painted by artist Peggy O’Neal depict emotions and character in the faces of Native Americans, settlers, and people of commerce around the turn of the 20th Century. Visitors walk through the various life cycles painted in large murals. Often objects sit in front of the paintings, creating a three-dimensional effect. The multi-sensory exhibits communicate on many levels utilizing sight, sound, and touch and includie buttons to push to hear long ago people tell their stories.

Murals titled “Paradise of the Past” explore the lost culture of the Coastal Indian Tribes. Inside a traditional plank house, we listened to stories of local from tribal members of the Coos, Lower Umpqua, and Siuslaw Indians. Another mural titled “Early Explorers” features trapper/frontiersman Jedediah Smith and the other explorers who discovered that the treasure of the Oregon Coast lay in its vast natural resources. 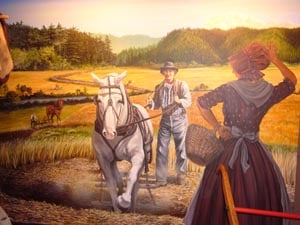 One of my favorite murals, although it is difficult to say “favorite” because I am drawn to all murals, features a pioneer woman, her back turned to observers calling her husband to dinner as he plows the fields. Vivid details and recorded sounds made me feel as though I could reach out and touch ducks paddling in marshy grass at the edge of the farmer’s field. In “Coastal Lifestyles,” we listened to the voices of early settlers and merchants share stories about their communities and commerce. We felt as though we visited a logger’s camp and a cannery where heaps of salmon littered the floor.

We climbed some stairs to visit a “Tidewater Town” built on pilings to accommodate the high tides. Wax figures in settings such as a barbershop, a general store, a millinery shop, and 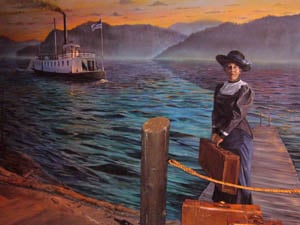 a school house gave us a picture of life revolving around the ebb and flow of the tides. A little girl, clad in blue Victorian dress, held her fingers in a “shush” motion. At the barbershop, we listened to a recording of the barber and his son-in-law as he cut the grandson’s hair. They spoke about the danger of children dashing around on the dock. Our eyes traveled to a mural with children as though they were playing as they awaited the landing of one of the ships bringing supplies and merchandise to the town. We descended more steps, and we were on the dock of the harbor where the mural wrapped around a corner. A sailing ship sparkled with life on the painted water. The artist’s sunlight perfectly illuminated the scene. She painted a Victorian woman standing on one end of the dock dressed for travel, as though she was ready to board the ship, her luggage in hand. Additional luggage stood before the picture making it three dimensional. 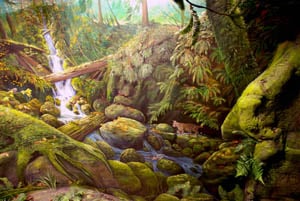 In the “Pathways To Discovery-Exploring Tidewater Country” natural history wing, the exhibits are staged as a day hike, beginning in the estuary at sunrise, traveling up into he Coast Range in the afternoon, and then down to the ocean beach at sunset. Rumpies (River Umpqua Elves) act as guides through the sixteen interpretive zones. Rumpies are comical and strange creatures who respect and honor the environment.

I asked about the artist and discovered that she and her husband form a team. Their focus is murals for museums and other institutions, always stressing environments for learning in their work. Their style is highly realistic and delivers information about the history and past scenes of life with visual intensity. Their studio, Ko-Kwow Arts & Exhibits, is located at North Bend. Peggy O’Neal is educated as a fine art painter and illustrator at the San Francisco Academy of Art. Her education and training shows in the faces of her subjects. Her husband, Larry Watson, majored in theatre arts at the University of Hawaii and at Western Washington State College. He studied four years at Pottery Northwest in Seattle, Washington, and has directed clay and sculpture for the city of Seattle at Seward Art Studio. For their company, he designs exhibits, manages construction, fabricates scenery, and consults on museums, interpretive centers, and exhibition planning in numerous settings across the United States.

On their web site: http://www.wowarts.com/gallery.html, photos of the murals at the Umpqua Discovery Center can be viewed as a slide show. Peggy O’Neal states on their pages: “Communicating information is a starting point; making the story come alive is our goal.” For me, the story leaped to life in every mural, recorded story, and exhibit design. The photos of muruals at the Umpqua Discovery Center are courtesy of artist, Peggy O’Neal.