You are here: Home / Blog / RV Travel Tales: Finding “Terrible Tilly” on the Oregon Coast
This post may contain affiliate links or mention our own products, please check out our disclosure policy here. 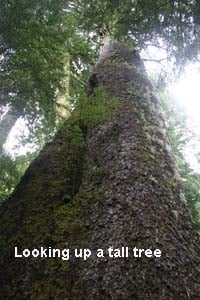 During our stay on the Oregon coast, we determined to visit the lighthouses that were open to tour, or even accessible to view. Tillamook Rock, nicknamed “Terrible Tilly” because its access is one of the most difficult and dangerous in the world, is one that we could only view and photograph from the Clatsop Loop Trail located at Ecola State Park. We drove through the day use park on a road winding into a lush forest of Sitka spruce towering to the sky. Their trunks with short stubs of limbs looked like fingers of a green velvet glove had run up the tree bark to the spreading boughs of lacey needles. Green ferns carpeted the forest floor. I decided that the stubby limbs were due to the heavier boughs broken by storms from the sea. Although it was an overcast day, the forest is so dense that scarcely a shaft of sunshine could ever reach the undergrowth. 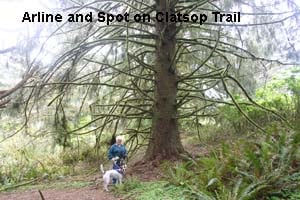 We started the hike on the Clatsop Loop Trail to view the lighthouse, not realizing that it was a mile and a half climb up an old road through dense forest, then another mile and a quarter back down on a narrow trail that gave us views of the ocean. We had not eaten lunch, thinking we would not be on the trail that long. As it turned out, we were gone about three hours—but I would not have missed the views for a dozen lunches. We huffed and puffed to the summit, passing one Sitka spruce that is reportedly almost 400 years old. Many others were almost that tall and round. From an interpretive sign, we learned that the early Indians burned away the forest growth to assure them of better hunting grounds and berry bushes. 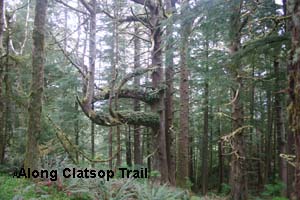 On the Oregon Coast, wind is the harshest enemy of the forests, while inland, fire becomes the most serious offender. We passed one old Sitka spruce with bottom limbs running horizontal before turning upward to the sky like a giant candelabra. Information on the interpretive signs said the tree probably once stood in a clearing that allowed it to spread its boughs until other trees closed in, forcing the limbs upward. On those limbs, ferns profusely grew like they were rooted in a window box. After passing a Hiker’s Camp at the top of the mountain, we descended about an eighth of a mile to the viewpoint for the lighthouse. The overcast sky disappointed Lee. The ocean, the lighthouse, and the sky looked gray. We probably stood on the cliff overlooking the lighthouse for an hour, waiting for the slightest bit of light to cross over and illuminate a photograph. From our perch high above the ocean, gentle waves hit the cliffs and some of the sea stack rocks in the water. White sprays spewed up the mountainside as surf collided with land or rocks. 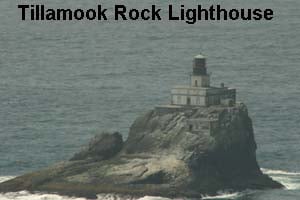 We had already read that construction on the Tillamook Rock Lighthouse started in 1877 on a basalt rock 1.2 miles off Tillamook Head and 20 miles south of the Columbia River. Drenched workmen blasted 29 feet off the top of the rock to make a flat surface for the lighthouse. They had to hammer in ringbolts for handholds while they worked. One engineer was swept to his death before a derrick could even be erected. A breeches buoy, typically a basket or a cargo net that slid on a cable attached to the rock and the end of a boom on a ship, was the only way persons or supplies could gain access to the fearsome rock. Today, a breeches buoy could be compared to a zip line. Even the smallest of crafts still cannot land under any weather condition. Yet, as I stood and gazed at the old building atop a huge rock, I imagined that one could motor out to it and explore.

The first order light was lit in 1881 and the storms that raged over the lighthouse were legendary. Walls of green water and rocks frequently washed over the tower and crushed roofs and glass. In 1894, thirteen panels of the lens were smashed, making Tillamook Rock the most costly station ever to build or to maintain. Keepers were isolated to the point of starvation on several occasions when the angry sea kept tenders at bay. No women or children were permitted to live there. The lonely lighthouse was decommissioned in 1957. No longer a state property, the rock and lighthouse have been sold three times and the present owners turned it into an unofficial columbarium—a resting place for the ashes of the dead. Access now is made only by helicopter, weather permitting.

We had also read that in January 1806 William Clark traversed the trail, along with an Indian guide, during the winter they camped at Fort Clatsop. They searched for a beached whale near present day Cannon Beach. Seeking a new source of food, they hoped to return to their fort campsite with a plentiful supply of whale blubber and oil. Many of Lewis’s journal entries describing the forests have inspired development of the Clatsop Trail. Most of the trails in Ecola State Park follow routes established by the Clatsop and Tillamook tribes. They used the trails primarily in the winter when canoe travel was unsafe. 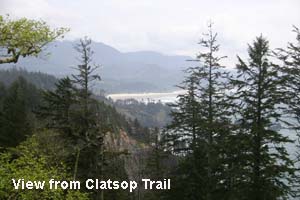 Standing there overlooking the ocean and the lighthouse, I could not visualize any person or animal descending that mountain to the ocean. When Clark and his guide reached the beach, they found the stripped skeleton of the 105-foot-long whale. Local Tillamook villagers were, according to Clark, “busily engaged boiling the blubber” and extracting oil from it. Although the villagers were reluctant to part with their bounty, Clark managed to barter for 300 pounds of blubber and a few gallons of oil. The exploring party returned to Fort Clatsop on January 10. Clark wrote on January 8, 1806, “Small as this stock is I prise it highly; and thank providence for directing the whale to us; and think him much more kind to us than he was to Jonah, having Sent this Monster to be Swallowed by us in Sted of Swallowing of us as Jonah’s did.”

Clark and his party of explorers scaled the northern face of Tillamook Head, which Clark described as “The Steepest worst and highest mountain I ever assended…” As we walked back down the narrow trail to our waiting Jeep, I looked through tall trees at the beautiful ocean waves crashing the shoreline. I wondered how Clark and his Indian guide ever climbed back up that mountain carrying 300 pounds of blubber and several gallons of oil. Fortunately, we could skip the whale blubber and have an early dinner at Pig n’ Pancake House in Cannon Beach.