You are here: Home / Blog / The 19th Hole: Ken Venturi Champions For Stutterers
This post may contain affiliate links or mention our own products, please check out our disclosure policy here. 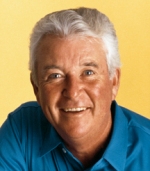 What do the following individuals have in common: John Updike, Carly Simon, Winston Churchill, Marilyn Monroe, Lewis Carroll, James Earl Jones, and Ken Venturi? They were all famous and successful in their respective fields, and they all stuttered. Today, October 22, is International Stammering (Stuttering) Awareness Day.

The 1964 U.S. Open champion Ken Venturi won regularly on the PGA Tour, collecting 14 wins during his career. When the U.S. Open returned to Congressional Country Club in Bethesda, Md. earlier this year, Jane Fraser, president of the Stuttering Foundation, offered the following remarks concerning Venturi and the U.S. Open:

“As much of the nation tunes in to watch the U.S. Open, it is impossible not to think about our friend Ken Venturi. Ken overcame many challenges to win the Open at Congressional in 1964, and go on to become the voice of golf for more than three decades. However, Ken faced no bigger obstacle than stuttering. He is a champion to those who stutter, going out of his way to share his personal experiences when consulted by a colleague, friend, or child. Ken was the first national spokesman for the Stuttering Foundation nearly two decades ago. He had corresponded over several years with my father, our founder Malcolm Fraser, and said he wished to do whatever he could to help people who stutter.”

Those who were present or watched on TV witnessed that smooth voice of Venturi as he presented the winning trophy to Rory McIlroy.

Malcolm Fraser, a successful businessman and stutter, went on to establish and endow the nonprofit Stuttering Foundation in 1947. The awareness day began in 1998 as an alliance between speech-language professionals and consumers. International Stammering Awareness Day is designed to highlight the effect that stuttering has on the lives of individuals.

The trials and tribulations of stuttering took center stage earlier this year when The King’s Speech was crowned best film at the 83rd Academy Awards. The true story was based on the life of Great Britain’s King George VI.

The Stuttering Foundation provides free online resources, services, and support to those who stutter and their families, as well as support for research into the causes of stuttering. For more information, visit www.stutteringhelp.org.