You are here: Home / Blog / RV Travel Tales: WorkCamping with a “C”
This post may contain affiliate links or mention our own products, please check out our disclosure policy here.

WorkCamping with a “C” is a registered name, defined as “….Workampers doing jobs for a charity.” Many groups under this heading are Christian-based. Yet, numerous other charitable groups are humanitarian, such as Habitat for Humanity, conservation groups, and camps and retreats affiliated with the YMCA or organizations helping physically or mentally challenged children. Lee and I are WorkCamping this week with a group from our church called the Hammerheads. We are part of a larger Southern Baptist group, “Nailbenders for Jesus.”  Hammerheads are a specialized trim crew, going into church construction sites to finish out doors and windows in worship centers or educational facilities. Each Hammerhead pays his own travel expenses to and from the job. Often, a church provides hookups on site, but on this trip, our home for a few days is in Piney Bay, a U.S. Corps of Engineers Park on Lake Dardanelle, located near Russellville, Arkansas. 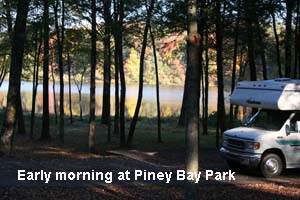 We left Heber Springs on Sunday afternoon and drove a little over 100 miles to our destination. Several other couples and individuals of the Hammerheads group had already set up around a camp fire. When we drove into the park in late afternoon, autumn colored trees glimmered on the mirror-still water alongside the campsites. We found a site to accommodate our forty-feet of motorhome just up a wooded hillside, but still within sight of the clear lake. 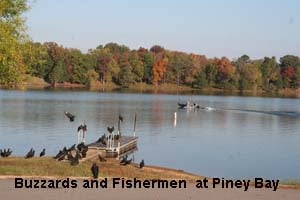 The men trekked off to their work at 8:00 on Monday morning, leaving behind wives to enjoy the tranquility of a lakeside park under a roof of bright blue sky. Spot and I discovered the largest flock of black vultures I had ever seen. Known in the Ozarks as buzzards, and jokingly called “Arkansas eagles,” the large birds with wings that soar on wind currents seemed to be taking the morning off, perched on a narrow boat dock. We walked close enough to get a good look at their glossy feathers. Only a handful few away, but they quickly returned to their post. 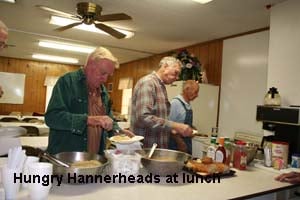 While the Hammerhead wives enjoyed the natural beauty in Piney Bay, our husbands, working in four teams of two men, hung doors and trimmed them out at Unity Baptist’s new property. At lunchtime, the ladies in the group joined the men at the church’s current facility for a delicious meal served by their church members at their old location, built in the late 1800s. We learned that the property is held by a local family, and any church that needs a facility can use it. Unity Baptist has occupied the building for five years. 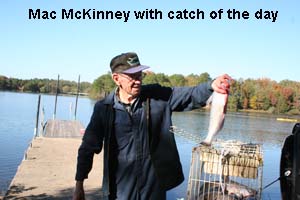 Late afternoon, I walked by the lake and met Mac and Betty McKinnry, who told me they had spent most of the summer at Piney Bay. They were hauling in buckets of large, beautiful catfish they had caught that day, using hot dogs marinated in strawberry Kool-Aid and garlic for their bait. The couple had hoped to be winter hosts, but the Corps has decided to close Piney Bay on November 1 and reopen in April.

The Hammerheads returned to the park about 4:00, tired but confident in the work they accomplished on Monday. Following a hot meal and a good night’s rest, they started the routine again on Tuesday and Wednesday, installing baseboards. In three days, they completed the project, knowing they made a great contribution to this small congregation in the River Valley of Arkansas.