You are here: Home / Blog / It Wasn’t Mickey!
This post may contain affiliate links or mention our own products, please check out our disclosure policy here.

by Dave Helgeson
November 1, 2011Filed under:

After a long day of exploring in the Mojave Desert, my wife and I were enjoying our evening in the boondocks playing a word game in the RV. Suddenly my wife’s eyes grew large and I saw fear sweep across her face. She pointed towards the kitchen and tried to speak, but the words wouldn’t come out. My initial thought was one of the big horn sheep we had seen earlier in the day or other large mammal had appeared at our kitchen window, but about then the word “mouse” escaped from my wife’s lips. As she stood on the dinette seat pointing and exclaiming to what she saw, I went to determine where the little vermin had gone. After some examination of the evidence, mouse droppings etc. I found he had entered and exited through a poorly sealed hole in the floor where the water pump draws water from the tank below. Being in the boondocks, I used what I had handy to block up the hole; steel wool and duct tape! Since it had entered via the waterline under the kitchen sink, the little critter had full run of the pots, pans, silverware drawer and kitchen utensils which now required a thorough washing with soap and water (water always being a precious commodity in the boondocks). Upon arriving in the next area of civilization (Laughlin, NV) we headed to the local Wal-Mart and purchased expanding spray foam and mouse poison. One positive thing came out of this hole (pun intended) experience, I now know how all the dust has been entering the area under the kitchen counter when we traveled unpaved roads and it has been repaired. Thank you Mr./Ms.  Mouse.

Boondocking and critters, just another adventure in boondocking! 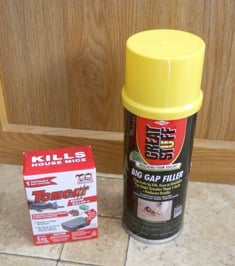