You are here: Home / Blog / RV Travel Tales: Honoring America’s Veterans
This post may contain affiliate links or mention our own products, please check out our disclosure policy here. 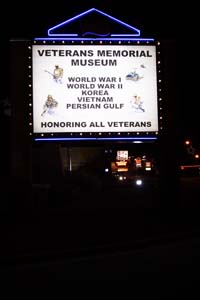 erans are esteemed and respected in many places in our country. But in Branson, Missouri, Tony Orlando’s first free Veterans Day show back in 1993 has evolved into Veterans Homecoming Week. An estimated 40,000 veterans and their families gather in the Live Music Show Capital of the World to remember, honor, and celebrate the sacrifices made for our freedom. The official week spans November 5-11, but every day from every stage in the small city where music never sleeps, America’s veterans are recognized and appreciated.

Across the town that boasts more theatre seats than New York’s Broadway, mini-reunions happen throughout the year. A few weeks ago, Lee and I were privileged guests at a reunion of veterans of the USS Walke Destroyer, which was commissioned in 1940 and decommissioned in 1970. While we were invited to offer the men and their families a memento of their visit to Branson in my history of entertainment, The Heart of Branson, we were honored to meet these heroes who served our country over a span of 30 years.

During the special week dedicated to the men and women who have served our country, Tony Orlando once again staged his Yellow Ribbon Salute at 2:00 p.m. on Veterans Day. The Veterans Village, providing a day room for greeting, swapping stories, and jamming musically, set up at Factory Merchants Mall for the week. Free lunch was served daily to veterans. Daily reveille and retreat were performed at the Mall. Also the 78th Annual Veterans Day Parade marched on Veterans Day morning on Branson’s dow 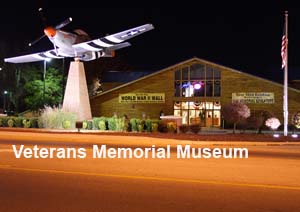 ntown streets. Other events included the 15th Annual Military Gala and Banquet at Chateau on the Lake and the 236th Marine Corps Ball where retired Captain Dale Dye spoke.

Walmart, in association with Branson Veterans Events & Reunions, paid tribute to veterans on November 10 with a ceremony, refreshments, and entertainment.  Walmart truck drivers provided a barbecue lunch on the parking lot of the Walmart Supercenter. The families of veterans were included in the event.

However, recognition of veterans is never confined to this one week in November. At the Veterans Memorial Museum located midway Branson’s famed 76 Country Boulevard, our fighting men and women are honored and remembered year-round. Fred Hoppe, internationally recognized bronze sculptor, had long dreamed of a memorial museum to honor all branches of the military in the wars of the 20th Century. Designing, funding, and building his vision in Branson, Hoppe collected and wrote scripts for over 2000 rare military artifacts housed in the 18,000 square foot museum. The Veterans Task Force calls the facility one of the greatest tributes ever completed to honor America’s veterans.Hoppe’s inspiration came from stories and sacrifices he heard from his father, Fred Hoppe, Sr., and the men who fought beside him in some of the bloodiest battles of World War II. Fred Hoppe, Sr. is honored with a mural and a special exhibit depicting his heroic rescue of a wounded fellow soldier. 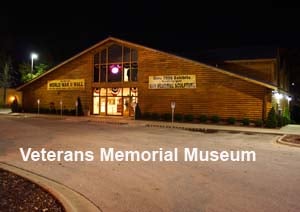 ze sculpture, measuring over 70 feet long and weighing 15-tons, centers the museum.  Featuring life-size statues storming a beach, the figures were modeled after a particular combat soldier from each of the 50 states. The sculpture is surrounded by over 400,000 names of American servicemen and women killed during WWII.

The remarkable museum is open seven days a week, 8:00 am to 9:00 pm, 8:00 am to 5:00 pm, winter and holidays, giving access to veterans who cannot be present during the official week designated specifically for veterans. Many of our fellow RVers are veterans. I thank each of them, as well as those who choose to travel by other transportation, for the sacrifices they and their families made to ensure Americans of their freedoms.