“Ho! for the Klondike. Stick to the trail and mush on!” Those were words to live by in 1898 when more than 100,000 excited gold-seekers poured into Seattle, Washington to outfit themselves for their journey to the gold fields up north. The frenzy had begun the previous year when the SS Portland arrived from northwestern Canada with 68 rich miners and nearly two tons of gold on board. Word spread quickly, and soon the waterfront city became known as the place to get the “ton of goods” needed to head to the wild unknown of Alaska and Canada. The best place to learn about the frenzy of the “Klondike Outfit Rush” is at the Klondike Gold Rush National Historical Park in downtown Seattle. The city played a crucial role as the staging area for this Gold Rush. 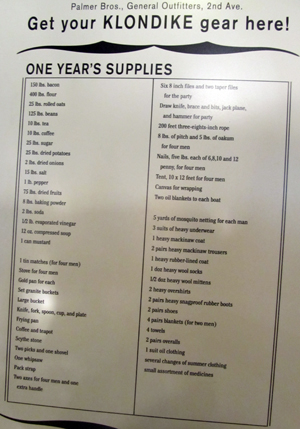 It’s hard to imagine hauling 400 pounds of flour, 150 pounds of bacon, 125 pounds of beans, plus cookware, clothes, and tools, but a year’s worth of food and goods (about 1,250 total pounds of provisions at a cost of $250-$500) were required by the Canadian Mounties for admittance to the gold fields. It was actually a smart mandate for the long trail to the Klondike. It protected gold miners from starvation while they waited out bad weather and worked their claims in hope of striking it rich. “A ton of goods” became a catch-phrase for the Klondike Gold Rush— all in hopes of finding a ton of gold! 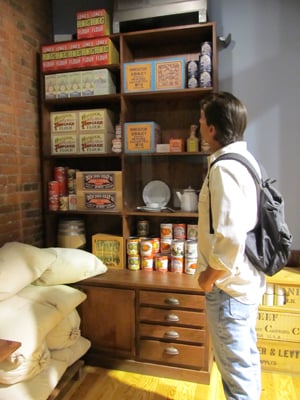 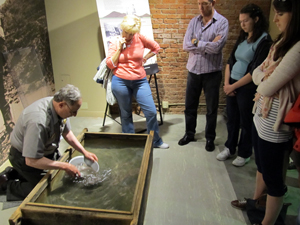 Signage, exhibits, and audiovisual programs inside Seattle’s Gold Rush museum fully document the story of the stampeders and the extraordinary gold rush era that peaked and plummeted within two short years. Sad but true, it is estimated that of the 100,000 people who embarked for the Klondike, 40,000 reached it, 20,000 actually worked mining claims, and only 300 made more than $15,000 in gold (the equivalent of millions of dollars today). And of those 300 who struck it rich, only 50 kept their wealth for any length of time. In the end, it was the merchants of Seattle who profited the most by outfitting the miners, which was a welcome relief from the stock market crash and the depressed economy during the day (sound familiar?). 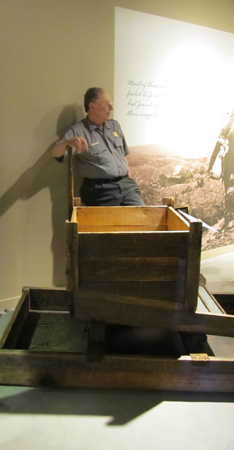 With the current price of gold, prospecting is an appealing hobby. If you want to see how gold panning is done, park rangers demonstrate the technique and some of the other equipment used by the early gold miners. While you still might need a pickaxe today, you probably won’t need 25 pounds of potatoes, 15 pounds of salt, or 8 pounds of baking powder when you go….  especially if your RV has a microwave and is well-stocked with frozen food!