You are here: Home / Blog / RV Travel Tales: A Workamping Career That Travels On a Song
This post may contain affiliate links or mention our own products, please check out our disclosure policy here. 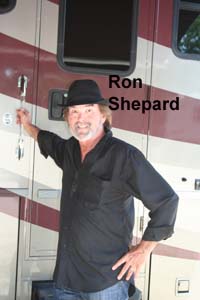 Ron Shepard, a consummate entertainer with a talent for country and gospel songs, proves that even delayed dreams can come true. He never gave up his zeal for entertaining and inspiring others with his music. Today, he combines his dream with full-time RVing.

At a young age, Ron recognized he had a voice. Growing up as a ward of the state in Florida, he recalls that God and music were his friends throughout his youth. Although he never had any formal training, at age fourteen he started playing guitar and memorizing signature songs of the classic country artists. Following his service in the U.S. Navy, Ron put together a band he named Southern Comfort. In addition to working a regular 40 hour-a-week job, he and his band played state fairs in New England and numerous military bases across the country, including the United States Coast Guard Academy.

While working on the famous Alaskan pipe line, Ron encountered Merle Haggard in concert. At that point, his life’s ambition jelled. He dreamed of record contracts in Nashville and tours on America’s stages. However, life rerouted those dreams. He and his wife Connie had moved to Nashville, Tennessee, where Ron hoped to land a record contract. He came close. He even coached Randy Travis on some of his mega hits that turned him into a country music icon. But back in Connecticut, Connie’s mother suffered a stroke. Ron told his wife: “I can always come back to Nashville.” The couple returned to Connie’s home state. Ron took a regular job, working nights while Connie worked days. Together, they cared for her mother for nine years. Following her death, they returned to Nashville. However, record executives said, “Well, Ron, you’re over 25 now….” No one signed him.

For the next eleven years, Ron and Connie lived down the road from Nashville in Lebanon, Tennessee. Connie worked at Cracker Barrel Corporation, and Ron kept on writing songs, recording his own CDs, and working a regular job. They bought their first home. Someone gave Ron the idea to remodel their house, sell it, and keep the capital gains. In a light bulb moment, he said, “That’s how a poor man can get rich!” 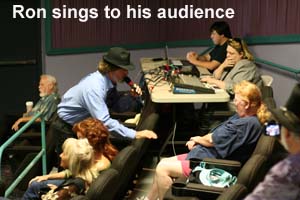 He continued buying and selling houses, putting in ten-hour workdays on remodels. Yet, he kept pace recording albums. They had ended up in North Carolina when Ron started tooling his musical dreams for an RVing lifestyle. For two years while waiting for their last house to sell, he traveled to Pigeon Forge and Gatlinburg, Tennessee, and performed at campgrounds. “Entertaining the RVing crowd is fun,” he says. “I’m blessed with a voice and a wide range, singing Waylon Jennings, and then switching to Vince Gill, and everything in between. My music appeals to many tastes.”

When their house sold, the Shepards paid cash for a new 38-foot Winnebago motorhome and headed for Florida where they had already established a domicile. Ron notes that Florida alone has over 1,000 campgrounds, not including the 55-plus gated communities. Their first year as full-timers, Ron performed at KOA’s largest campground. The manager there sent him to KOA Naples/Marco Island. He played one night a week in exchange for their winter site. On other nights, he was free to sing at neighboring campgrounds and resorts. The KOA management contracted Ron to perform again from November 2011 through March 2012. He also has bookings with a 55-plus community in Florida.

“Thousands of snowbirds migrate to Florida, mainly from upstate New York and the east coast,” Ron says. “They are very active people.  Every day they have something going on in the campgrounds—line dancing, crafts, or even a “slow bike ride” contest.”

He goes on to say that Marco Island is the last place on the west coast of Florida, and attracts many wintering RVers. Ron is originally from Miami and he has relatives in the state, which makes it a good match for his winter home. Since Connie grew up in Connecticut and he grew up in Dade County, Florida, they both love the roar of the ocean. Their campground site at KOA Naples/Marco Island affords them daily walks on the beach with their dog, Buffy.

Ron owns two different sound systems, so he leaves one set up at Marco Island, and takes the other to bookings at different campgrounds. Behind his motorhome, he pulls a Chevy Equinox, giving him the freedom to drive to various gigs while leaving his home on wheels in one spot. Ron takes his own photos and makes up labels for the CDs he sells to campground audiences. He recently bought a $1200 printer to create more professional labels. “I have a tower that duplicates seven CDs at a time,” he says. “I operate under a business name, Shepco Music, which combines my last name and Connie’s first name.”

Although Ron and Connie have lived on the road for over a year, he says, “Everyday, I’m going through stuff and asking: ‘Do we need this?’ Our bedroom had two lounge chairs that I removed to make room for the sound system. Despite having three slides, we have to think about storage space for the equipment that earns our keep on the road.”

After their first season in Florida, Ron accepted a contract with Compton Ridge Campground in Branson, Missouri, to play one evening a week in exchange for a summer site. He also played during certain daytime hours at an indoor mall on Highway 76 in Branson. Traveling from Florida to Missouri, the Shepards paid for only one night’s camping. Ron has developed a web site in which the campground owners he calls from the highway can listen to a sample of his singing. He offers an evening of entertainment with the opportunity to sell his CDs in exchange for an overnight’s stay. Usually within two hours of his contact, an owner calls back asking when he can be there.

Ron is also getting his foot in the door with East Coast Entertainment, a company that handles many record label groups. He hopes to do corporate parties and family reunions. “Those jobs pay well, plus, they offer accommodations at the hotel,” he adds. “I might have to drive a couple of hours to a gig, and perhaps only get one a month, but that would help with my income.”

Opportunities for Workampers are limited only by one’s imagination and initiative. Ron Shepard is one of those who used his dreams and resourcefulness, but also his passion and persistence to carve out for himself a career that travels on a song.