You are here: Home / Blog / RV Travel Tales: Riverboat Discovery More Than a Boat Ride
This post may contain affiliate links or mention our own products, please check out our disclosure policy here.

When Lee and I spent time in Fairbanks, Alaska, we took a four-hour excursion on Riverboat Discovery III in Fairbanks, Alaska. We discovered the tour was more than a cruise down the Chena River to its convergence with the silt-laden Tanana. From an open sun deck or heated glass enclosed observation areas, we experienced an entertaining slice of Alaskan history and culture.

From the narrator on board, we heard interesting history about the family that owns this large three-deck sternwheeler. The Binkleys have over 100 years of riverboat history starting with the father and grandfather who both piloted boats along the Yukon. When airplanes replaced the huge riverboats for carrying cargo into Alaska, Jim Binkley and his wife, Mary, decided to open an excursion business with a 25-passenger boat. In 1955, Jim built the company’s first sternwheeler, Discovery I, in his backyard.  Their three sons worked on the boat, all learning to be U.S. Coast Guard-licensed riverboat captains.  In 1971, the family had Discovery II built on the steel hull of the last freighting sternwheeler on the Tanana and Yukon Rivers.  In 1986, they had Discovery III, the boat we rode, built in Seattle. Today, third and fourth generations of Binkleys in Alaska are at the helm of their boats. Discovery III holds about 900 passengers and the Discovery II holds 300. On the June afternoon that we cruised, they ran both boats on the afternoon tour

The narrator on the boat spoke with a deep, pleasant radio voice and the gift of gab that kept the information interesting. He said the grandchildren of Jim, now deceased, started at age five to learn the riverboat business. They had a little ceremony and each child stood on a box in the pilot’s station. They were handed a bottle of Windex® and a large roll of paper towels and told to work their way up from the bottom. The family has built the business into a fine-tuned organization, starting with their Steamboat Landing, the place of departure. A group of shops under one open space inside the building had excellent prices on Alaska tee-shirts and other items. Outside the building, baskets overflowing with summer flowers greeted guests in a riot of color. 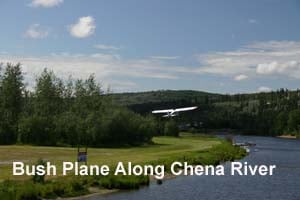 Under a blue sky with billowing white clouds, we left the dock. A bush plane in a planned demonstration took off beside us and circled and landed on a very short and narrow strip of field.  We cruised down the Chena River, past Alaskan homes huddled on the river banks—some quite spacious and luxurious; others, the typical Alaskan houses, built piecemeal. Often discarded snowmobiles and various vehicles, barrels, and sometimes, even a small plane or a dogsled, littered the property. The narrator said young people put all they have into the land, then build their own structures freestyle, living in the lower part until they can add an upper story and eventually, a roof.  Some houses, log or frame structures, were still unfinished—and as the narrator said, probably will never be “finished!”  Yet, others were comparable to mansions. 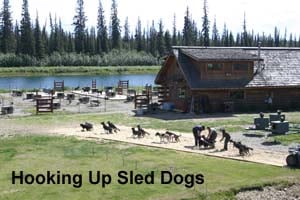 Downstream, we stopped alongside Trailbreaker Kennel, home of the late four-time Iditarod champion Susan Butcher and her husband, Dave Monson. At the time of our cruise Susan was too ill to meet the boat. A young woman, actually a contender for that year’s Iditarod Race, and her assistants came to the edge of the shore and showed us the newest puppies. Barking and leaping sled dogs, obviously excited to do what they had been trained to do—pull a dog sled, surrounded the trainers holding the puppies.

The sound system allowed each passenger to perfectly hear the stories of dog mushing and of training champion teams. Video monitors throughout the vessel provided every person aboard a view of the dog yard.  Fortunately, with no fore knowledge, we had chosen the side of the boat that gave us a ringside seat. A team of dogs ran in circles, impatiently ready to be harnessed for a run around a lake in front of Susan Butcher’s home. By the time assistants got them ready to run, they were jumping, yelping, and straining to pull away to the trail. Spot would have loved it! I think he could have been a sled dog.

When a trainer opened the gate, the team whizzed through in a streak. Trainers estimated they were running 18 to 20 miles per hour around the lake. When the racing dogs came back into view and into the yard, trainers unhitched them, and they all splashed into the river water to cool off.

We cruised on downstream to the “wedding” of the Chena and the Tanana Rivers. Their merge was quite evident, the somewhat clear, but iron oxidized Chena flowing into the milky green glacier-fed stream. The Tanana contains what is called “glacier flour,” silt that come off the glaciers. 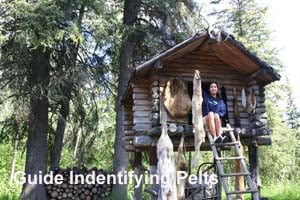 From the point of the two rivers’ union, we reached the Chena Indian Village. About 1200 people got off the two boats for a one-hour tour with guides who identified an authentic birch bark canoe, various pelts, and the small log caches on stilts that stored the natives’ winter food. We were directed in groups to different sites in the village for demonstrations and insight into Native American life before white traders changed their lifestyles. 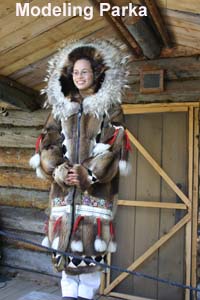 Lee and I first went to the summer cabin of Dixie Alexander, an Athabascan Indian, who makes clothing that is considered art. She lives at the Village all summer and demonstrates skills that her forebearers developed to insure their survival. She sews garments from animal skins and decorates with exquisite beadwork, using ancient techniques she learned from her mother and grandmother. Some of her pieces have achieved recognition from the Smithsonian. A chief’s jacket, based on a traditional Athabascan Indian design, is in a permanent collection at the Smithsonian’s National Museum of American History. We saw a similar jacket, as well as a stunning woman’s dress with beading on the hemline that indicated Dixie Alexander’s clan. She said that the everyday clothing of her ancient ancestors had no adornment. The decorated garments were reserved for ceremonies. One of the Native American guides modeled a striking Yupik Eskimo parka made from fur pelts and decorated with beaded flowers. Alexander explained that the pelt of an animal with extra oil in its fur to repel frost created the hood of the parka surrounding the young woman’s face like the sun.

In the center of the village, sled dogs leaped and barked within a circular pen. The same young woman who spoke at Trailbreaker Kennel demonstrated more about the dogs’ training, explaining that they are well-fed and maintained as athletes. She tied a red “bootie” on one of the dog’s paws to show that they sometimes wear them for protection from the snow. She dressed another dog in a fabric windbreaker jacket to demonstrate protection from the frigid winter weather.

We went to another area where two young women with olive skin and bubbling personalities told about the different shelters their ancestors had built and lived in before the white man entered their lives. Caribou stood behind them in a fenced area. One of the interpreters explained that reindeer and caribou are the same animal, then jokingly said, “…except reindeer can fly!” Most of the young guides are students at the University of Alaska in Fairbanks. 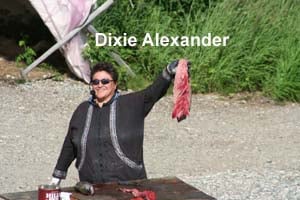 After we boarded the riverboat for our return to the dock in Fairbanks, Dixie Alexander stood on the shore and described what life was like for her family in their fishing camps each summer. Using swift motions, she skillfully wielded her knife to prepare salmon for drying. She related that each summer her family catches large quantities of salmon, not only for their own tables, but also for her dad to feed his dogs as he sleds out to trap during the winter.  She said each dog would eat at least one salmon per day.