You are here: Home / Blog / RV Travel Tales: A Haircut, A Mansion, and An Art Show in Kalispell, Montana
This post may contain affiliate links or mention our own products, please check out our disclosure policy here.

Singer and songwriter, Ray Stevens, wrote and recorded: “The Haircut Song.” He relates several funny scenarios for getting a haircut out of town: in Montana from a barber who used a Peterbilt™ for his chair and way down South in a shop with a steeple and an organ in the corner. As often as Lee and I travel, sometimes for several months, we must have the inevitable haircut out of town. I’ve had haircuts in Alaska, Mexico, Coffeyville, Kansas, and numerous places in between.

However, the most memorable one happened one summer afternoon as we drove into Kalispell, Montana. Lee spotted a barber shop pole. “I think I need a haircut,” he said as he parallel parked our 40-foot motorhome in front of an old fashioned one-chair barber shop on Main Street. It paled in comparison to the Butte, Montana, shop Ray Stevens sang about on our collection of his songs. I stepped out the door to walk with Spot, and the barber invited me and our dog in his open door to visit as he cut Lee’s hair. 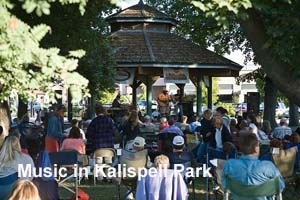 Yet, the notable haircut was among many interesting things we experienced in Kalispell, a town of about 20,000 people in the Flathead Valley of Montana—a gateway to Glacier National Park. We wandered around a local art fair in the downtown area and into the Carnegie Library that has been reinvented as an art gallery.

Wide streets eventually led us to the edge of Kalispell’s original township where the Conrad Mansion stands as a monument to the town’s founder. With the town’s tree-lined streets yet a dream, Charles Conrad built a gracious three-story Victorian home with appointments and gardens beyond the imagination of neighboring settlers. In 1895, the elegant house became a permanent home for his family. Children’s laughter bounced off richly paneled walls and stained glass windows. Still today, a secret pocket door in a hallway reveals a hiding place for notes passed between daughter Alicia and one of her grandmothers, who resided in the family’s home. On the third floor, a rainy day playroom shared space with the mansion’s laundry, powered by Conrad’s ingenious gravity-flow water system. 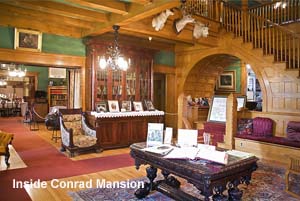 The perceptive visionary lived briefly beyond the completion of his luxurious house. His family’s liveliness filled the home until1964. In memory of her pioneering parents, their youngest daughter gave the Mansion to the city of Kalispell. Each year, daily tours, teas, a Christmas Bazaar, a mystery evening declared “Death By Chocolate,” and a Mother’s Day Champagne Brunch honor the Conrads. Throughout her years in the Mansion, Mrs. Conrad delighted in entertaining the children of Kalispell at Christmas. Each season, the 18-foot tree decorated with twinkling lights and reproduction ornaments commemorates her tradition.