You are here: Home / Blog / RV Travel Tales: A Beach Excursion
This post may contain affiliate links or mention our own products, please check out our disclosure policy here. 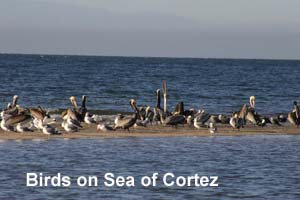 During our month-long stay at El Golfo, Mexico, many of our neighboring RVers left almost daily on their ATVs, or “quads,” as they called them, racing for as many as 30 or 40 miles down the beach of the Sea of Cortez. Almost everyone here has one or two “quads” and the beach hummed with their roaring motors. One morning, we decided to venture out on the trace of a road in the sand in our Jeep. We never imagined we would see so many pelicans. They were mixed in with gulls and other birds, but there were hundreds and hundreds of brown pelicans. Mostly, the birds perched on little points of sand jutted out into the Gulf. Approaching, we recognized them by their longer necks, often stretched upward. Their walk is a rather comical waddle. On one point, it looked as though they were lined up to launch—one at a time.  Basically, that’s what they were doing!  Funny how we put human characteristics to animals or foul. 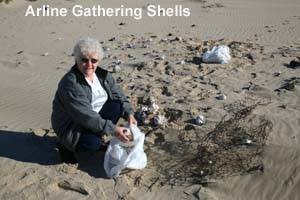 We made a rest stop at what appeared to be a “dump,” although so much of the beach is littered that it was hard to tell what was a long-term dump or what had recently happened. Anyhow, we found several piles of conch shells. Some were even buried and we dug them up. Someone told me later that the Mexicans eat whatever is inside—kind of like escargot—so I’m sure the shells had been dumped. We went about 30 miles before we were halted by water in an inlet too deep for us to cross.  So we ate our lunch and poked along the shoreline for more shells. On one reef, there were thousands of imbedded shells. At one point, we stopped to look at boulders at the base of sandstone cliffs and they, too, were imbedded with shells. It appeared that mud had rolled the shells into a huge rock. 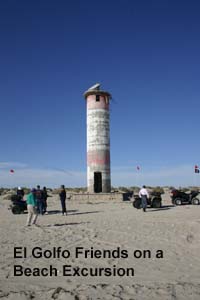 We had started back when we met some of our friends on quads.They rode right across the inlet, which by that time had receded quite a bit due to the ebbing tide. We could read the depth it on their tires, so we crossed, too. On the other side of the inlet, we discovered an abandoned lighthouse. We looked along the shore, but didn’t find as many shells as we had previously found. Our friends departed to head back toward the resort. We drove about three miles farther down the beach before we turned around. In some places, opposite the bay, there were huge sand dunes that look like pictures from the Sahara Desert. There were also sandstone cliffs, some with points that look like the Pyramids. 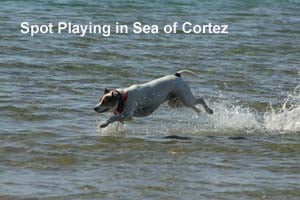 Along the way, we gave Spot his Christmas present. Since the beach was deserted except for us, we turned him loose. At first, he was not sure because he is never permitted off a leash. Quickly, he realized he was free and he ran and ran, splashing into the bay and leaping like a kangaroo.  As he darted back toward the dunes, I saw him rolling in the sand. What a mess of white fun and beach sand!  He returned to the Jeep totally exhausted. 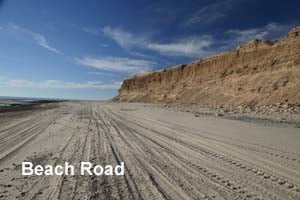 By 5:00, we were tired, too, and ready to return to our motorhome bearing bags of shells that required cleaning. Many neighboring RVers at El Golfo collected the beautiful shells along the shoreline. One afternoon, I visited with one woman who created all kinds of crafts from her shells, from picture frames to bowls. When I looked over her items, she said, “Doesn’t God make beautiful things?” Indeed, He does. I found it fascinating to reflect that each shell, no matter how tiny, had once housed some creature. Picking up the shells in various colors and shapes becomes addictive, and provided wonderful treasures to carry back home to Arkansas.