You are here: Home / Blog / The 19th Hole: Try an Arnold Palmer for the Holidays
This post may contain affiliate links or mention our own products, please check out our disclosure policy here. 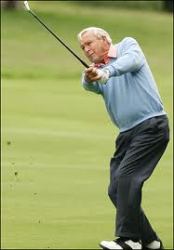 A few years ago I sat in the cozy bar at Arnold Palmer’s Restaurant in La Quinta, Calif. and ordered the restaurant’s namesake drink, an Arnold Palmer. The half unsweetened tea and half lemonade drink was made famous by Palmer, who popularized it by requesting the refreshing drink frequently in golf course clubhouses across the country during his days on the PGA Tour. Those wishing to ring in the holidays with a little holiday cheer might want to kick it up a notch. If you take the ingredients of the Arnold Palmer and add a shot of vodka, you’ve created a John Daly, named for the PGA bad boy and frequent imbiber. Any Arnold Palmer drink to which alcohol is added is sometimes referred to as an adult Arnold Palmer. Another variation is if you use sweet tea, rather than unsweetened tea in the mixture. This drink is called the Winnie Palmer, affectionately named for Palmer’s first wife.

The Arnold Palmer drink gained prominence when the company Innovative Flavors partnered with the Arizona Beverage Company and began producing drinks based on the Arnold Palmer. Over the years, the popular beverage company has expanded its Arnold Palmer-related drinks to include variations like “lite,” zero-calorie, green tea, pomegranate, peach, and pink lemonade. A few years ago, Innovative Flavors licenses a powdered tea stick, which can be poured into a bottle of water while on the go.

Whether you substitute the Arnold Palmer cupcakes for Christmas cookies, or turn your Arnold Palmer drink into a John Daly, the same warm greetings go out to each and everyone this holiday season. Merry Christmas!