You are here: Home / Blog / RV Travel Tales: A Day in the Sonoran Desert
This post may contain affiliate links or mention our own products, please check out our disclosure policy here.

For years, RVing friends told me about the beauty of the Southwest desert. When we passed through, I only saw barren wasteland. Nothing beautiful like the mountains covered with pine and hardwoods, gurgling streams, and winding paths through the woods that surround my home in the Arkansas Ozarks. But then, we began spending winters in Arizona and Mexico. As I walked in the desert—even boondocked there–I began to see the magnetism that my friends had recognized, an alluring landscape all its own. 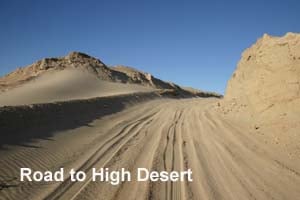 During our stay in El Golfo, Mexico, we drove to the high desert for a day’s outing. We climbed up mountains of sand, carved in rivulets by the wind. I was reminded of the Badlands in South Dakota.  Stark, brown beauty glistened like diamonds scattered in the sand. The climb in our Jeep was quite steep and the road deep in sand. We stopped once and let air out of our tires to make it to the top. The flat desert atop the mountain stretched to a distant horizon, desolate and so very quiet. As Lee put it, “…miles and miles of miles and miles.” We felt totally alone in a world with no other people, houses, or vehicles.

We parked our Jeep and ambled around the desert for a couple of hours, picking up stones and slivers of petrified wood. Spot ran loose, a new experience for him to be free of his leash. We were amazed at the beds of tiny colorful stones and pieces of wood sitting on top of the sand. We dug down and there seemed to be no stones beneath that first layer. Many of the little rocks were like brown gravel. But mixed in, some stones were black, red, yellow, purple, green, and pink. They looked like candy Easter eggs, perfectly smooth and oval. An amazing wonder. How did they get there? Was this huge Sonoran Desert once a forest–or a sea bed?  Someone at our resort told Lee that long ago a huge meteor hit Mexico City, tilted the earth, and changed the environment and climate. We do not know if that is fact or folklore.

Nevertheless, we had those miles and miles of more miles and miles to ourselves. We had to watch where we stepped because some creatures tunnel under the sand. Despite trying to avoid those little communities of holes, we “fell in” several times, The experience reminded me of the book Good Neighbors I used to read to my granddaughter. In the story, a desert creature made his home beneath the sand and he worked at keeping his little entrance tidy, sweeping it off each morning. A sloppy neighbor moved in next door and piled debris and brush around his entrance. The neat neighbor grumbled and fussed. But in the end, predators came, noticed his nice little doorway, and reached in to take him. Of course, the sloppy neighbor burrowed through from his side of the tunnel and snatched him out of harm’s way just in time! 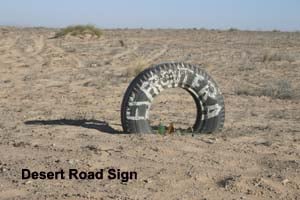 About lunchtime, we returned to the Jeep, ate the sandwiches we had packed, and then drove on down one of the sandy roads crisscrossing the desert.  We were amused by the Mexican’s road signs: one an old tire propped up by rusted bed springs.  Another, two tires, graduated in size, and a turquoise garbage can stuck in the middle. That one had no writing. I guessed people just knew when one said, “Turn at the two tires and garbage can!”  Yet another was a metal pole with a five-gallon can stuck upside-down on the top. The Mexican people are ingenious for using what they have handy!  They really make use of old tires.  Of course, many were merely tossed in their yards in the town of El Golfo, but we saw some buried and stacked in the sand for a retainer wall. Others formed playground equipment at the school.

A new road across the desert seemed to be under construction: a road that we did not know where it ended. Still, we followed the harder packed dirt, noticing the sand-rutted trails that crossed it. We met a few trucks, and then a military vehicle that stopped as it approached us. At least, eight handsome young soldiers, each with an automatic rifle slung over his shoulder, piled out and motioned for us to stop. Some visitors to Mexico would have been intimidated. But we remained calm, hoping that Spot would not growl from his backseat perch. The first young man who spoke to us could not understand our English, so he called for the driver of the vehicle to come. A striking man, he flashed a row of white teeth in a big smile. Lee explained that we were exploring and that we had come from El Golfo Resort. Whether he understood us or not, he waved us on. We regretted that we did not ask to take their picture, but then, that might not have been the preferable move to make. Fortunately, Spot made no sound. On a previous day when we drove on the beach, a lone soldier halted our vehicle and asked where we had been. That day, Spot stood and growled.

Farther down the road, we found another place to park and got out to explore. In this location, wind and perhaps, occasional torrents of gushing rainfall, had formed canyons and washes almost like a miniaturized Grand Canyon. The steep gorges showed dramatic sides, forming interesting patterns as though the sand had been cut with a knife.  Again, Spot got to run. Once, a huge jack rabbit raced across the landscape in a path between me and Lee and Spot.  I thought, possibly, Spot has startled the rabbit. However, he contentedly poked slowly along behind Lee and did not even see the rabbit. What a chase he missed!

What a day of solitude for us. Few places in our world today offer the quiet and vast environment that we discovered in Mexico’s Sonoran desert.