You are here: Home / Blog / Great Escapes: Arizona’s London Bridge
This post may contain affiliate links or mention our own products, please check out our disclosure policy here.

When you think of popular attractions in Arizona, the Grand Canyon is top of mind. But did you know that the London Bridge in Lake Havasu City is the state’s second-largest attraction? Thousands of visitors come each year to see the city’s claim to fame — the actual 930-foot long bridge that once used to span a section of the Thames River. 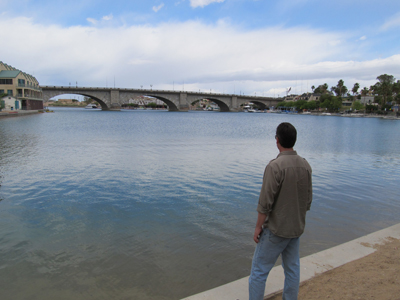 The Lake Havasu City Visitors Center conducts a 45-minute walking tour of the London Bridge for $5 per person, but it’s good to know a little of the history before you go. Contrary to popular belief, this is NOT the same London Bridge of nursery-rhyme fame. That original structure was built between 1176 and 1209, and survived more than 600 years before being replaced by a newer bridge, which was completed in 1831. The replacement couldn’t handle the ever-increasing flow of modern traffic, so by 1962, the London Bridge was literally falling down.

The British government put the sinking London Bridge up for sale and Robert McCulloch, founder of Lake Havasu City and Chairman of McCulloch Oil Corporation, submitted the winning bid of $2,460,000. The bridge was dismantled, stone by stone, and carefully numbered for reconstruction. Everything was first shipped to Long Beach, California, and then trucked to Lake Havasu City, at an additional cost of $4,500,000. Reconstruction began in September 1968, and on October 10, 1971, the bridge was rededicated. Today, you can stroll across pretty blue Bridgewater Channel on the same historic structure that four decades ago was located 5,400 miles away! 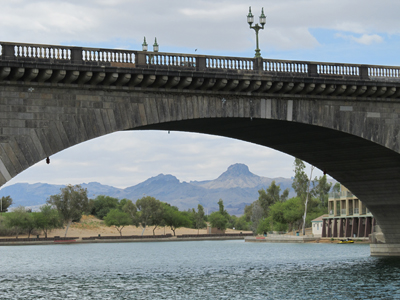 If you’re towing a boat when you visit Lake Havasu City, you’ll get good use out of it. Water temperatures range from 75 to 85 degrees during much of the year, and 60 miles of pristine navigable waterways offer plenty of hidden coves and beaches. Most RV parks and campgrounds have boat trailer parking, as do motels. You can also rent some fun if you want to explore Lake Havasu— from high-performance race boats to leisurely pontoons and kayaks. If you’re looking for solitude, you might not want to visit during Spring Break. For a few weeks each year, thousands of sun-seeking college students from across the U.S. and Canada transform the town into a non-stop party scene. At other times, Lake Havasu City is a very RV-friendly vacation destination. 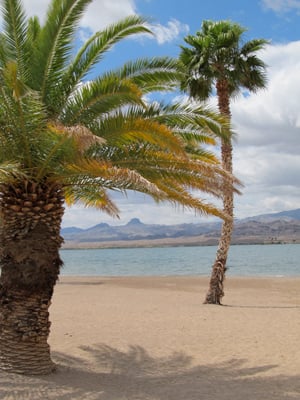