You are here: Home / Blog / Great Escapes: Hiram M. Chittenden Locks
This post may contain affiliate links or mention our own products, please check out our disclosure policy here.

Where can you find an English style botanical garden, smolt flumes, fish ladders, a spillway, two ship canal locks, and a visitor center to explain it all? At the Hiram M. Chittenden Locks in Seattle, Washington! Known locally as the Ballard Locks, this is the most popular site along the Lake Washington Ship Canal. The locks are constantly busy elevating vessels up and down between Lake Washington (freshwater) and Puget Sound (saltwater)— from 16-foot canoes to 760-foot long cargo ships. The grounds are operated and maintained by the U.S. Army Corps of Engineers, and are free to visit every day from 7 a.m. to 9 p.m.

Upon arrival, your first stop should be the staffed visitor center where you’ll find brochures, books, gifts, exhibits, and a short orientation video. Here you’ll learn that the locks’ namesake, Hiram M. Chittenden, was responsible for designing the locks, but it was actually under the direction of Colonel James B. Cavanaugh that the U.S. Army Corps of Engineers broke ground on the project in November 1911. The 8-mile-long, 100 feet wide, and 30 feet deep Lake Washington Ship Canal and Locks were finished six years later. Before Chittenden retired due to poor health, he was responsible for some of the most important engineering projects in the country—flood control projects for the Ohio River Basin and the Sacramento River in California, and the bridge and road system in Yellowstone National Park.

Surrounding the visitor center is the lovely Carl S. English, Jr. Botanical Garden that just begs to be strolled. Paved walking paths wind through more than 570 species of plants, including many shade trees such as the rare dawn redwood from China. Colorful poppies, foxglove, and fuchsias make beautiful backdrops for photos. Park benches are perfect for picnicking or people-watching.

Next, head over to the locks for some real action and watch how efficiently and quickly the maritime traffic flows. Then, cross over the locks and spillway dam to the fish ladder. In 1917, the U.S. Army Corps of Engineers constructed the first 10-step ladder. Today’s ladder has 21 steps, or weirs, which allow the fish to swim upstream on a gradual incline. Six lighted windows in the underwater fish viewing room allow you to watch returning adult sockeye, chinook, and coho salmon between the months of June and November. You may even catch a glimpse of a steelhead returning to spawn from January through April. It’s fun to watch the young salmon (smolts) in May and June as they head to the ocean to mature via the smolt flumes. The Muckleshoot Indian Nation works diligently to improve fish stocks in the Lake Washington watershed. You’ll probably notice tribal members conducting research. 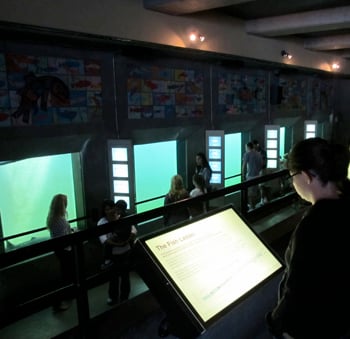 Whether you have one hour or several, a stop at the Hiram M. Chittenden Locks is fun, educational and interesting. The slogan on the front of their brochure proclaims it’s “where the activity never stops!” and it’s true— there is always a ship “locking through” and fish waiting to be watched.

The visitor center and gift shop operate year-round under two seasonal schedules, winter and summer. Winter hours (October 1 through April 30) are 10:00 a.m. to 4:00 p.m., closed on Tuesdays and Wednesdays. Summer hours are daily, May 1 through September 30 from 10:00 a.m. to 6:00 p.m. Free guided tours are provided from March 1 through November 30.

No admission charge, but parking is $2.00/hour for a maximum of three hours. Pay stations accept debit and credit cards, and coins. Payment is required for parking Monday through Saturday from 8:00 a.m. to 6:00 p.m.