You are here: Home / Blog / RV Travel Tales: An Enchanting Desert
This post may contain affiliate links or mention our own products, please check out our disclosure policy here. 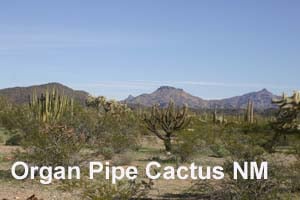 We had a vague sense that Organ Pipe Cactus National Monument, bordering the line between Arizona and Mexico, is a special place. But its surprising beauty enchanted us. As we drove south off I-10 through 75 miles of scrub desert—shifting sand dunes, salt-covered flats, scraggly creosote bushes, and small to tiny towns that had seen better days—we could not imagine the view framed in our windshield at a turn into the National Monument Visitor Center. We had already determined to park in the Twin Peaks Campground and pictured nondescript, dirt spaces with no hookups. The volunteers at the Visitor Center directed us down a narrow paved road and around a curve to the campground and a choice of several spaces that fit our 40-foot coach. We were pleasantly pleased to find long concrete pads tucked into lush desert landscaping. Although the part about no hookups was correct, we were permitted to run our generator two hours in the morning and two hours in late afternoon. We had access to solar-powered showers and a dump station. We were comfortably at home for four nights. 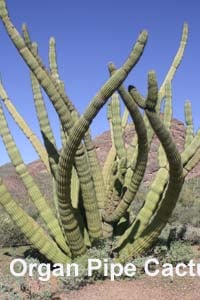 Every window of our motorhome framed a view of a flourishing desert floor and mountainsides dotted with green organ pipe and saguaro cacti. Although the 300, 669-acre National Monument and United Nations-designated International Biosphere Reserve is named for the organ pipe cactus, which grows only in this one spot in the United States, we noted that saguaro were taller and more mature than in the Saguaro National Park. We soon learned that a total of 28 species of cactus, including prickly pear and the wooly-looking cholla, are preserved in this wilderness kingdom, alongside creosote and bursage bushes, mesquite, and brittlebush. In the canyons and higher elevations of the Ajo Mountain Range, jojoba, agave, rosewood, and palo verde create an evergreen landscape. 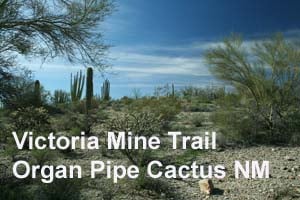 Animal life also abounds in Organ Pipe Cactus National Monument in Arizona, although one has to be in tune with the desert—and probably be a night stalker—to catch even a glimpse of kangaroo rats, jackrabbits, lizards, owls, or snakes. Ninety-eight percent of the monument is wilderness, but a hiking trail to the old Victoria Mine, a nature walk behind the Visitor Center, and two scenic drives give anyone a sense of the beauty of a desert environment thriving as a protected area. 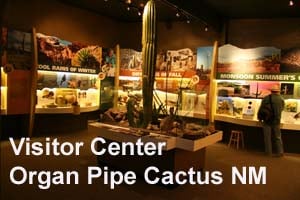 The Visitor Center presents information about the National Monument’s geography, history, and its inhabitants, both plant and animal. The well-designed exhibits include the reproduction of a pack rat’s midden and information about the winter and summer monsoons. Scientists have researched back 14,000 years by dismantling a rat’s den. Behind the Visitor Center’s patio, a nature trail ambles through the desert and signs designate particular species of cactus. 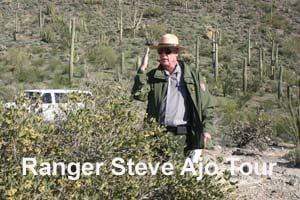 We took two scenic drives, the North Puerto Blanco Scenic Drive as late afternoon sun spread its pink light on the Ajo Mountains and also a two-hour ranger-led van tour to Ajo Mountains. Volunteers and rangers give informative patio talks about different species of animals and plants, such as the mistletoe that attaches itself to a palo verde tree and eventually drains the tree of moisture. When the tree dies, so does the mistletoe. 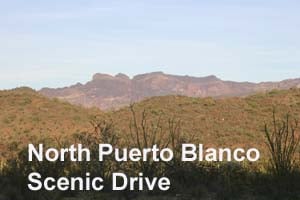 Two or three evenings each week, rangers and volunteers present programs in the Twin Peaks’ Campground Amphitheatre. One moon-silvered night, we listened to the history of mining within the Monument’s acreage. A slide show enhanced the ranger’s impersonation of an old-time miner. Although mining took its toll on the land, how fortunate we are that it became prohibited and the mountainsides and surrounding desert could return to their natural state. 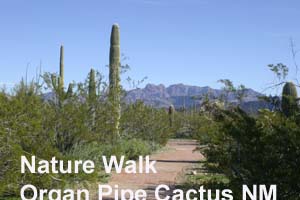 The ranger on our van tour said a Saudi Arabia prince once came to visit Arizona’s Organ Pipe Cactus National Monument.  He observed the green plant life and stated: “This is not a desert!” Indeed, this National Monument is unlike the images in one’s mind when picturing a desert. Due to the two annual rainy seasons, the Monument becomes an incredible—and yes, enchanting—garden in the Sonoran Desert.