You are here: Home / Blog / RV Travel Tales: Over the Border to Algodones, Mexico
This post may contain affiliate links or mention our own products, please check out our disclosure policy here. 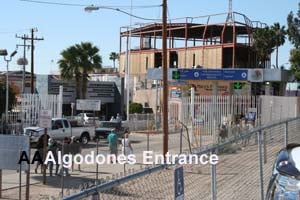 Typically when we spend time in Yuma, Arizona, in the winter, we make at least one trip across the border between the United States and Mexico to shop in Los Algodones, the northernmost town in Mexico, and at its northeastern tip, the northernmost point in Mexico. Located in the Mexican state of Baja California near the borders of both southeastern California and southwestern Arizona, I discovered an interesting geographical distinction as I researched the small Mexican town on Wikipedia: if people  traveled in any of the four cardinal directions from anywhere in Algodones, as most people call the town, (due north, due east, due south, or due west), they would cross a U.S. border.

We have always felt safe visiting Algodones. In fact, we even drove our tow car through that crossing once when we were spending a month at El Golfo on the Sea of Cortez, and we needed to return to Yuma for shopping. I have seen some smaller motorhomes traversing the narrow streets, but I would not advise RV travel through the Mexican town. 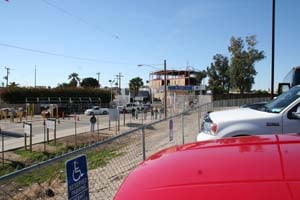 Algodones is less than ten miles south of Yuma, off Interstate 8. However, we crossed into California before we took the exit onto Route 186 that led us to the border, officially named Anrade, California. The border crossing is open from 6:00 a.m. to 10:00 p.m.  Cars can cross, but why would you drive when the local Native American tribe operates a large paved parking lot with a nominal parking fee of $5? The town of Algodones—at least the part for shopping—covers about four blocks with pharmacies, dental offices, and one restaurant immediately at the crossing. Other restaurants are throughout the shopping area. Parking in Algodones is limited. Folks from the United States walk through the crossing with no questions asked and no papers checked. However, be sure to have your passport to cross back into the United States after you shop. And generally, expect an hour or more waiting in line to exit Algodones. On this winter week day that we arrived around noon, more people were leaving than going into the town.

Prescription medications, dental care, and eye exams and glasses while one waits are the biggest draws to the charming little town. When someone appoaches and asks, “Do you want drugs?” the meaning in Algodones is prescription medications—not street drugs. At least, that has been our experience over several years of shopping in the town. American and Canadian dollars are important to their economy and the locals strive to keep their town clean, safe, and appealing to those who winter in California and Arizona.

We made our way first to get glasses, stopping at several shops to compare prices. This year the eye care shops all had the same deal: two pairs of frames and lens for the price of one. A single pair was the same price, and the price had doubled from two years ago. We ended up at the same shop I’d used previously and we both got two pair of bifocals—Lee’s are trifocals and mine are transition lens. The shops are all very modern and clean. I’ve noticed each year that we visit, Algodones’ stores are upgraded. In the pharmacies and eye care shops, products are displayed in cases and on glass shelves. All clerks speak proficient English and United States currency is accepted.

After we had purchased our glasses, we had over two hours to wait for them to be picked up. We made our way back to one of the many pharmacies, walking along sidewalks lined with booths of various merchandise—pottery, jewelry, handbags, and tee-shirts. Sugary smells of baked goods and Mexican candy wafted through the air. Vendors hawked fresh asparagus and strawberries. A young girl played on a corner with a Gila monster. Outside every pharmacy, dental office, and eye care center, someone tried to entice people to enter. The constant chatter became annoying.

We made our purchases, including bottles of lotion and vanilla, at a pharmacy. Yet, we still had time to shop before we returned to the eye clinic at 4:00. We crossed the brick street, watching for cars, trucks, bicycles, motorcycles, and delivery trucks. Yellow two-wheeled carriages powered by someone pedaling a bicycle in front carried people around the streets. No one seemed to have a right-of way. Vendors walked down the middle of the streets, one with a drooping wire of glittery, artificial red roses; another with a giant-sized metal sun shape under his arm. Street side booths held everything from carvings to blown glass and mirrors.

I would love to browse, but the Mexican merchants will not permit anyone to look without pushing items and continuously cutting prices. I wanted a dark brown purse and when I stopped to look at one, the young girl insisted that I buy it. Because I could not actually examine it to see if it fit my needs, I finally walked away and around a corner into another hallway. I found one I liked, but that woman was also insistent. She started out at $65 and I told her I had not planned to pay that. She kept coming down, saying it was made of buffalo leather. I have no idea if it is or not. Finally, I agreed to $20, but she kept reminding me of a $1 tip—her bus fare, she said. So I paid her $21, which is quite reasonable for a leather purse. Yet, I would like to have had the leisure to try the zippers and look at the pockets. Lee bought a leather wallet at another booth. The salesman spoke good English, and was persistent, but not pushy. He said the wallet was handmade in Leon, known for its leather products. We have been to Leon and Lee purchased a fine pair of brown leather shoes in that town.

We walked down another sidewalk covered with a tarp, somewhat like a tunnel. The vendors almost accosted us. Despite my protests, one man selling jewelry had a bracelet around my wrist before I could stop him. He said he needed to make a sale to buy his tequila, and then he quickly changed his word to “medication.” I first agreed to pay $10 for the bracelet and gave him $20, which he handed it off to someone else to go for change. Then he immediately had a matching necklace draped around my neck, saying he would take $20 for it, then he came down to $15.  I kept saying “no,” and he said $10, so I agreed. He was determined to have that whole $20! The Mexican people are gracious and hard working. Those sales are their livelihood, but it makes me sad that they believe they have to literally push their products in the faces of customers.

We finally ducked into a walkway leading to other shops and a restaurant simply to get away from the hawking. Sitting at a table in the hallway outside the restaurant, we ordered Cokes and guacamole dip, and sat and read our books for over an hour. I think that was the best guacamole I’ve ever eaten. I’d almost return to Algodones another day just to have that appetizer. 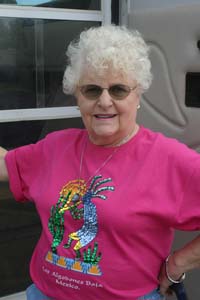 A man had merchandise set up on a kiosk next to our table. He was quietly sewing sequins in an Indian design on tee-shirts. He never tried to sell us anything. I went over and inquired about his sewing. He still didn’t try to sell me. I kept looking at the shirts and decided I wanted one. Then I also bought a sterling silver chain from him. I’m sure what the other man sold me is silver plate. I’ve been duped before on Mexican streets. But it’s shiny at the moment!

When we were ready to leave Algodones about 4:30, the line to go through customs was short, compared to the times we’ve been about two hours getting out of the town. It was a good day. We accomplished our shopping and tasted a most excellent guacamole!