You are here: Home / Blog / Great Escapes: Goosenecks State Park
This post may contain affiliate links or mention our own products, please check out our disclosure policy here.

Although there’s not much to the 10-acre park itself— Goosenecks State Park’s claim to fame is its incredible view of the San Juan River meandering through a red rock canyon. Geologists call it “entrenched meanders” but the name Goosenecks paints a better mental picture of what you’ll see 1,000 feet below the park’s overlook. Reached by a four mile paved side road (Highway 316) that branches off Highway 261 a few miles from the small village of Mexican Hat, Goosenecks State Park is free to visit and worth a quick stop to take in the extended panorama. All the better if you’ve got a wide-angle lens to capture the vista. 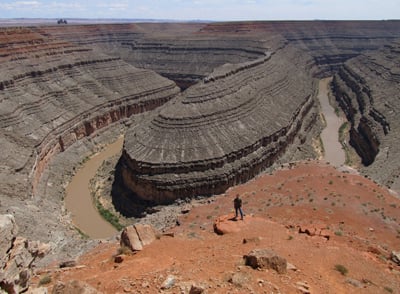 Millions of years ago, the land here in southeastern Utah was relatively flat. Then a period of uplift occurred. As the land rose, the San Juan River flowed faster while still following its twisty path. The river cut into the land, eventually creating the impressive canyon we see today. In fact, the silt-laden San Juan River’s course is so twisting here that while the water actually flows through five miles of canyon, it really only progresses westward by one linear mile. 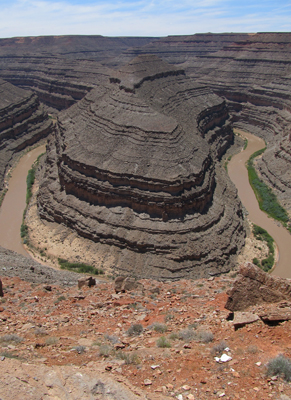 The headwaters of the San Juan River are in the San Juan Mountains of southwestern Colorado. The river originates at an elevation of 14,000 feet and drops to 3,600 feet at Lake Powell, which it empties into about 35 miles from Goosenecks State Park. The river is named for San Juan Bautista, Spanish for Saint John the Baptist. 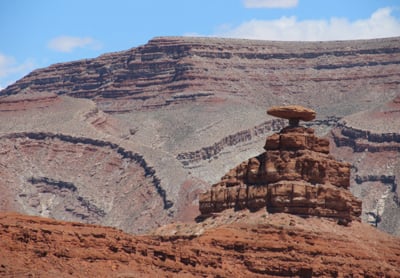 The small settlement of Mexican Hat takes its name from a curious formation consisting of a large flat rock 60 feet in diameter perched precariously on a much smaller base at the top of a small hill.