You are here: Home / Blog / Boondocking With Homer!
This post may contain affiliate links or mention our own products, please check out our disclosure policy here.

Containing 600,000 acres that include one fifth of San Diego County, Anza-Borrego Desert State Park is the largest state park in California and the second largest in the continental United States, after New York’s Adirondack Park. The park received its name from 18th century, Spanish explorer Juan Bautista de Anza and borrego, the Spanish word for Bighorn Sheep.  Anza-Borrego Desert State Park includes 500 miles of dirt roads, twelve designated wilderness areas and 110 miles of hiking trails which provide visitors with many opportunities to experience the park’s unique desert environment. What a great place for an adventurous RVer to explore, but wait it gets better! Anza-Borrego is the only park in California that allows dispersed camping (aka boondocking) throughout its 600,00 acres. Note: You will need a metal fire pan if you plan on having a campfire. 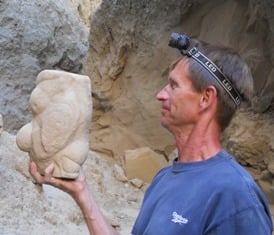 Now for something most people are unaware of: Anza-Borrego was discovered by Homer Simpson, but the fact became an embarrassment to the park service and the evidence was literally covered up. How do I know? I found a bust of Homer buried in the mud caves of Anza-Borrego while boondocking there. Don’t believe me, take a look at the picture!

Boondocking with Homer, just another adventure in RVing!