You are here: Home / Blog / RV Travel Tales: Branson is Open!
This post may contain affiliate links or mention our own products, please check out our disclosure policy here. 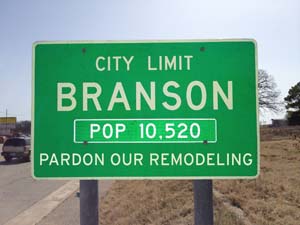 In the early morning hours of February 29, 2012, an EF-2 tornado whirled over Branson, Missouri, and ripped down the typically-packed Highway 76, more commonly known among residents and visitors as “The Branson Strip.” Fortunately, no fatalities and only about three dozen minor injuries were reported. Yet the devastation touched six of Branson’s 50 theatres, 22 of the more than 200 hotels, and 26 of the town’s numerous restaurants and eateries, displacing entertainers with no stages and support staff with no businesses to serve. Also many other stores and homes throughout Stone and Taney Counties sustained major damage and power outage as a result of the storm that swirled from a nighttime sky.

But Branson has heart. Branson has faith, and Branson has good neighbors who were already pitching in by daylight to clean up, restore, and rebuild. Branson Mayor Raeanne Presley said, ‘We have some broken places, but we’re going to fix them. We are blessed that no one died due to this tornado, and our thoughts and prayers go out to those families who did lose loved ones as a result of this large storm system that affected much of the Midwest. We’ve been touched by the outpouring of support from around the nation. We forget how many years and how many millions of guests we have welcomed to Branson. During times of great struggle, we are renewed by our guests’ love of Branson.”

Timothy Haygood, whose family owns Americana Theatre, arrived on the scene at 2:00 a.m. on February 29 to clean up, move equipment, and assess the damage to their building. He noted that many businesses were hit hard, but he expressed a pride in the city’s fire, police, and electric utility crews for their work in helping Branson recover. “Americana Theatre hosts four shows: 3 Redneck Tenors, Todd Oliver and Friends, Cassandre’ Haygood, and Joseph Hall’s Elvis Rock N’ Remember, and employs over 60 people who are counting on us to rebuild,” Timothy said. “I will personally make it happen. The Americana Theatre will be back in 45 days with Dad Haygood’s construction company leading the way.” The Haygoods moved their show in 2012 to the RFD-TV Theatre, which did not receive damage and the schedule of shows at this facility is on target.

The celebrated tribute artist production Legends in Concert, onstage in Dick Clark’s American Bandstand Theater, received damage significant enough to cancel their schedule for March. However, the theater had no structural damage and restoration plans are completed and delivery of replacement building materials and dozens of construction workers are already onsite. Like Timothy Haygood and his family, Legends’ manager Jeannie Horton and theater owner, Jim Morris, were surveying damage in the early morning hours following the tornado’s hit.

Mr. Morris said he is “…dedicated and diligently working with the producers of Legends in Concert to reopen the theater as rapidly as possible. Their outstanding live entertainment production is an essential part of our Highway 76 and Fall Creek complex including the Ramada Hotel, Midtown Cafe, and soon to be reopened classic automobile museum under the theater. All attractions complement one another so well.”  Morris added, “Although the damage is unfortunate, my thoughts are with those residents who have suffered from the storm. But not even a tornado can shake my long-time confidence and commitment to Branson.”

“Although we  regret the relatively short disruption to our 2012 season, and appreciate our fans and business partners’ patience while the renovations are underway, the theater will be better than ever when the repairs are complete to this fabulous entertainment facility,” said Brian Brigner, chief operating officer for Legends and producer of On Stage Entertainment.  “We’ve enjoyed 16 wonderful years’ operating our production in this community and look forward to many, many more.” 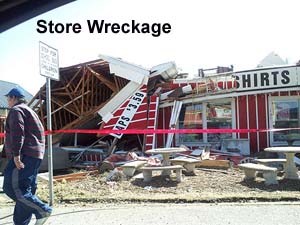 The majority of the storm damage is in localized sections of West 76 Country Boulevard west of Gretna Road/Hwy 165, Old Downtown, and the Branson Convention Center area. Recovery and rebuilding efforts started in earnest on March 1, with many of the affected businesses reopening or scheduled to reopen in the coming days. The Hughes Family’s new show “It” went onstage on the evening of February 29, continuing the tradition: “The Show Must Go On.” West 76 Country Boulevard also reopened to traffic, and visitors traveled to and from attractions, shows and restaurants unencumbered. Some of the shows on schedule are: SIX at Mickey Gilley Theatre, Grand Jubilee at Grand Country Square, Pierce Arrow, the Hughes Family, and The Haygoods at RFD Theatre. Silver Dollar City, the Titanic, Showboat Branson Belle, Sight and Sound Theatre, Hamner/Barber Theatre, Tanger Outlet Mall, IMAX Theatre and Mall, and numerous other stores and entertainment venues did not receive damage and are open to welcome visitors. Showboat Branson Belle opens on March 30 and Silver Dollar City opens with its international festival World-Fest on April 12.

The Branson/Lakes Area Convention & Visitors Bureau announced that 22 of the more than 200 hotels in Branson have sustained damage as a result of the storms, with varying degrees of severity.  Estimated opening dates for those affected hotels will be posted on www.ExploreBranson.com. A spokesperson for the CVB stated: “Branson has more than 18,000 lodging units, and can host up to 60,000 visitors a day.  The storm damage has not substantially affected Branson’s lodging capacity, and the majority of accommodations are open for business as usual.”

Branson Landing on the shores of Lake Taneycomo, although closed for a couple of days for clean-up, made significant progress in recovery. “Returning Branson Landing to a clean, safe, and secure shopping center for our shoppers is our goal,” said David Ayer, General Manager. “Bass Pro Shops and Belk opened for business on March 1, and the majority of retailers and restaurants opened on Friday, March 2, 2012.”

Dick’s 5 & 10 Co-Owner Steve Hartley said merchants in Historic Downtown Branson are taking care of customers in their “usual friendly way,” and have been since just hours after the twister. “We were down a very short period; now we are ready to go. Branson’s spirit has shown what we are made of,” Hartley said.

Yes, Branson was hit and some were knocked down. But the Live Music Show Capital of the World is open and ready to offer their special brand of family entertainment to visitors.