You are here: Home / Blog / Deception Perception!
This post may contain affiliate links or mention our own products, please check out our disclosure policy here.

As stated on their website, Washington State Parks would have you believe;
“The name “Deception Pass” derived from Captain Vancouver’s realization that what he had mistaken for a peninsula was actually an island. He named that island “Whidbey” in honor of his assistant, Joseph Whidbey, who was at his side when Vancouver realized the mistake. The captain named the inlet at which he was anchored “Deception Pass” to commemorate the error.”

However, after a very secretive undercover investigation, I have discovered the truth! The real deception in the name Deception Pass State Park is the allowable RV lengths in the campground.

When planning a recent campout with friends, we tried to book two side by side spaces only to have the online reservation system tell us our 27ft travel trailer was too long for the space we had selected. The highlighted warning stated the space would only accept trailers up to 18ft. The first clue that deception was afoot was the fact that the space is equipped with 50 amp electrical service. Now when was the last time you saw an 18ft (or smaller) RV that required 50 amp service? Further sleuthing revealed the stated pad length was 42ft. Finally a quick check on Google Earth showed a very spacious site as viewed from above. Changing the inputted length on their website to show our RV was only a small travel trailer (a lie), we soon had our reservation in hand. Upon arriving at the site several weeks later not only did our 27ft travel trailer fit in the site, but our full size, extended cab, long bed pick up too, with room to spare! 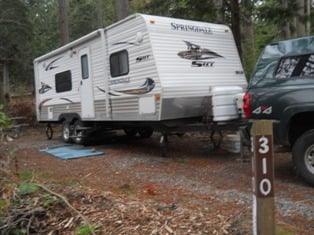 Washington State Parks, I love ya, but can you hire somebody that knows how to use a tape measure, otherwise you’ll continue to make a liar out of me!

Dealing with deception, just another adventure in RVing!