You are here: Home / Blog / RV Travel Tales: The Sinking of the Titanic Marks 100 Year Anniversary
This post may contain affiliate links or mention our own products, please check out our disclosure policy here. 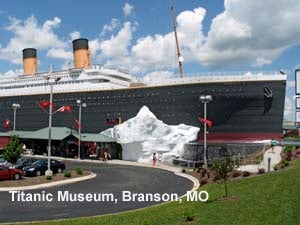 One hundred years ago in the dark morning hours of April 15, 1912, the Titanic, the largest and most luxurious ship in the world, plunged to the ocean floor. Touted by her builders as unsinkable, a mammoth iceberg turned the Titanic’s maiden voyage from Southampton, England, to New York City into the greatest maritime disaster ever known. The inky black sea swallowed 1,317 of her passengers and 891 crewmen. The ship, Carpathia, steaming 58 miles away came to the rescue of 712 passengers, mostly women and children. 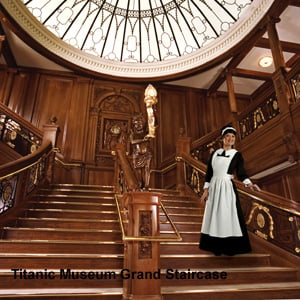 The Titanic Museums with locations in Branson, Missouri, and Pigeon Forge, Tennessee, step back to 1912, giving each guest the boarding pass of a particular traveler on that legendary ship. “Passengers” experience what it was like to walk the hallways, parlors, cabins and the Grand Staircase of the Titanic while surrounded by artifacts and exhibits that tell the story of the ship’s history and fate. First Class Maids, Captain E.J. Smith, and other crew members bring the timeline and heroic stories of that crucial night to life. At the end of the tour, guests discover the fate of the particular person whose boarding pass he or she held.

Together, the two museums represent the largest permanent monuments in the world dedicated to the memory of Titanic. Immediately recognizable for their ship-shape design, the museums are homes to hundreds of artifacts from the ship and its survivors. The concept for the two venues is the same. At the Branson location Molly and Carter, Titanic’s mascots, are a daily presence as a tribute to the dogs that were on board the ship. The Pigeon Forge location is larger with a section called Tot-Titanic, designed for children age nine and under. These small guests get to steer the ship, talk to a polar bear, and try and put the ship back together. 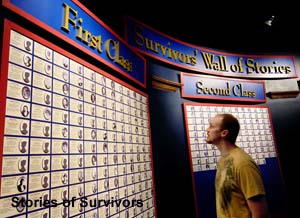 Known to most people as the Unsinkable Molly Brown, Margaret Tobin Brown’s personal items are displayed exclusively in one entire gallery dedicated to her story at the Branson location. The Survivors’ Wall opened exclusively at the Branson Titanic in 2011. At the Pigeon Forge venue visitors can see “Behind the Scenes of the Making of the Movie Titanic.”  Co-owner Mary Kellogg-Joslyn says, “We try to give our guests something different at each location, and something new for each visit.”

The tragedy in the icy waters of the Atlantic Ocean 100 years ago continues to fascinate, mystify, and sadden people today. The questions of “…how?” and “…why?”  and the stories of those who perished and those who survived capture imaginations. Titanic Museums marks the 100th anniversary of the sinking of this magnificent vessel with various events and exhibits. The display of a treasured album with photographs taken by Father Francis Browne, a Jesuit priest and renowned photographer from Ireland, will be on display in Missouri at the Titanic Museum Attraction on April 6-10, 2012. The historic images will then travel to the Great Smoky Mountains for display at the Titanic Museum Attraction’s Pigeon Forge location on April 12-21, 2012. During their visit, the photos will essentially be viewed almost 100 years to the day they were originally taken.

The album of 159 images, containing some of the only known photos taken aboard the Titanic at sea, is captioned in Father Browne’s handwriting. The original album, insured at more than $1 million, has never left Ireland since Father Browne’s death in 1960. Its display at the Titanic Museum Attractions is a once-in-a-lifetime opportunity for Titanic enthusiasts and photography historians to see the original images on exhibit, including the only known photo of the ship’s wireless room, the last photo ever taken of the ship’s captain, and the ship’s anchor being raised from the water for the final time.

“The media christened the discovery of Father Browne’s photos in 1986 as the ‘photographic equivalent to the discovery of the Dead Sea Scrolls,’” said John Joslyn, co-owner of the Titanic Museum Attraction and co-leader of the first private expedition to visit the ship’s final resting place on the ocean floor. “That may seem like hyperbole, but among the vast collection of photos he took in his lifetime, perhaps one single photo album captured the world’s imagination like no other: a record of his days as a passenger on the maiden voyage of Titanic before he disembarked in Ireland.”

On the 100th-year anniversary of the majestic ship’s last day at sea, the Titanic Museum Attraction is honoring all 2,208 people aboard with the only formal U.S. ceremonies and tribute to the ship, its passengers and crew. The program, “A Night to Remember: An Original Musical Tribute to Titanic,” is a professionally-staged production that includes the inspiring voices of choirs, the haunting sounds of bagpipes, and comforting words of remembrances. In addition to musicians and the voices of adults and children, the ceremony will also highlight a parade of flags, poetry readings, and the lighting of an eternal flame in remembrance of the passengers and crew aboard Titanic. The event happens at noon (CST) on Saturday, April 14 at the Titanic Museum Attractions in Missouri and at 8:30 p.m. (EST) in Tennessee.

“We want the ceremonies to be respectful of the memory of those who were aboard, regardless of their fate,” says John Joslyn. “We are honored by the many descendants of the ship’s crew and passengers who have chosen to attend our ceremony.” 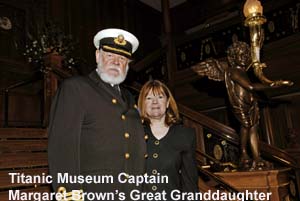 Branson will host one of the few remaining children of the ship’s original passengers and crew when Pearl Leemhuis takes her seat at the museum’s ceremonies. Pearl’s mother, Bertha Lehmann was a 17-year-old passenger leaving Switzerland to join her family in Iowa. Among the descendants attending the tribute in Pigeon Forge will be the grandson of Charles Lightoller, the most senior Titanic crew member to survive the disaster. Timothy Lightoller and his wife are traveling from their native Scotland to be a part of the observance. One of the ship’s most famous passengers, Margaret Brown, will be represented in Pigeon Forge by her granddaughter, Helen Benziger. Descendants of Isidor and Ida Straus will also pay respects to their ancestors who perished aboard the ship. Isidor Straus was the co-owner with his brother of Macy’s Department Store in New York.

Visitors may purchase tickets by phone at (800) 381-7670. In addition to museum admission and the musical production, ticket holders will receive limited edition memorials dedicated to the ship’s history, including a DVD containing video tributes of the personal stories of selected passengers and crew.