You are here: Home / Blog / RV Travel Tales: The World Comes to Silver Dollar City’s Doorstep
This post may contain affiliate links or mention our own products, please check out our disclosure policy here. 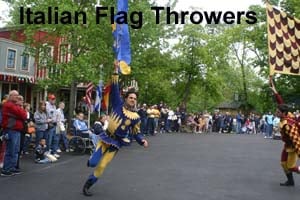 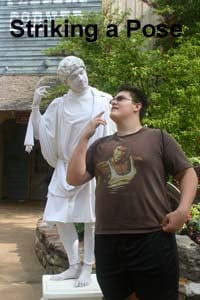 The boot-shaped country of Italy, bringing one of the five new shows, transformed the Red-Gold Heritage Hall and its courtyard into “Little Italy.” Elegantly-dressed ladies and gentlemen straight out of story book pictures strolled the Italian Market Place, nodding and bowing to guests as though we were all attending a fancy ball. On pedestals, statuettes stood in silence; yet from the corner of my eye, I caught a slight—and discreet—change of pose. Under the arbors, vines mysteriously came to life and a royal Italian couple passed on stilts. Inside the Red-Gold Heritage Hall, we sat at small tables set up like an outdoor café. Italian chefs with operatic voices introduced “La Bella Musica,” translated as “The Beautiful Music.” One chef even bowed and kissed my hand. 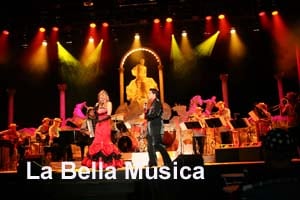 The voice of Aaron Caruso, a classically trained tenor with performances in Carnegie Hall to his credit, mesmerized the audience with classic love songs and operatic favorites. Soprano Melanie Goerlitz captured hearts with her clear voice, her blonde beauty, and her stage poised personality. The two were joined onstage by world-champion accordion artiste, Cory Pesaturo. A nine-piece orchestra, appropriately costumed as Venetian gondoliers, accompanied the program.

After Italy, it was on to Hawaii—not exactly another country, but definitely a different culture and style of music. Billed as Traditional Hawaiian Music, the show in River Front Playhouse featured four-time Grammy winter, George Kahumoku, Hawaiian slide and slack key guitarists Bob Brozman and Ledward Kaapana, Da’ Ukelele Boyz, and of course, traditional Hula Dancers with graceful hands, swaying hips, and flowers tucked in long tresses of dark hair. 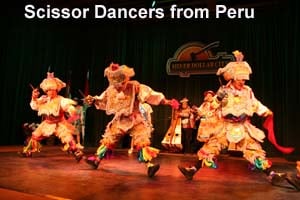 Around the corner, at Boat Works Theatre, the Yawar Chicchi Scissor Dancers from Peru filled the stage with color and energy, dancing to their native music. Both men and women performed dance steps combined with amazing acrobatics. Throughout their performance, they clicked out rhythm with two scissor blades held in their hands like castanets. With moves as though their bones were rubber, each dancer topped another with flips, body twists, and even bounces across the stage on their backsides.

From Peru to Ecuador is a bit of a stretch on a map. However, we closed that geographical gap in a five-minute walk up one of Silver Dollar City’s hills to the Gazebo at the Town Square. Ecuador Manta has been coming to World-Fest for many years. But their hauntingly beautiful music on traditional instruments from the Andes Mountains always takes over our hearts.  Lee even purchased a small handmade pan flute to add to his collection of musical instruments. And of course, we came away with CDs so we can be transported to Ecuador even as we roll down American highways in our motorhome.

Also at the Gazebo, we tapped our feet to the Russian Academic Band, another group that has played World-Fest for many springs. Although they perform a blend of traditional Russian music, they also play American Dixieland Jazz as though they were born and raised in our Southland. 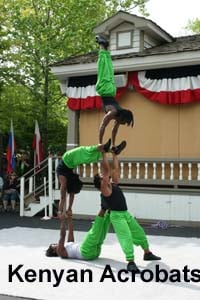 In between shows at the Gazebo, we watched the Kenyan Sarakasi Acrobats and the Sbandieratori Arrezazo Italian Flag Throwers on the City’s Main Street. Then it was back down the hill to Dockside Theatre for a peek into Ireland with harpist Derbhail Finnegan and her husband, Robin Slater, accompanying her on the flute. We also took a side trip to hear Swiss and Austrian songs by Master Yodeler, Kerry Christensen.

From Dockside, it’s a short step to the Opry House for the Mariachi Divas, an all-female Grammy Award-winning group performing traditional Mariachi, Latin, and “Ranchegue” music. Founded by trumpet player, Cindy Shea, whose blonde hair and fair skin is the first clue that she is not of Mexican descent. But when she plays trumpet, her heart—and her music—is in Mexico. Over the past ten years the ensemble has represented women from Mexico, Cuba, Samoa, Argentina, Columbia, Panama, Puerto Rico, Honduras, El Salvador, Peru, Tonga, and even Switzerland and Japan. Shea states: “Music is a way of uniting our cultural backgrounds.” 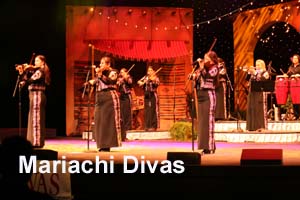 Against a backdrop of an adobe market place, the ladies costumed in tailored black attire typical of Latin America, played and sang music that one would typically hear in a Mexican theatre—or a town plazas. The theme park setting of Silver Dollar City is familiar ground to the Divas. Since 2003, they have wandered the streets of Disney at Anaheim as the official mariachi band. The multi-talented musicians play different instruments and switch roles as featured vocalists. In 2008, Mariachi Divas won the Grammy Award for the Best Regional Mexican Album of the Year for their 2008 release of “Canciones De Amor.” This marked the first time in the history of the National Academy of Recording Arts and Sciences that an all-female mariachi group had been nominated—or had become a winner. Of course, we came home with their newest CD: “Mariachi Divas: 10 Aniversario,” which was also nominated for a Grammy in 2010.

At the City’s Frisco Freight Company Barn, Tastes of the World serves up menus from numerous countries, including everything from entrees to desserts. Have a bowl of Irish stew, a Mediterranean chicken gyro, a plate of German sausage with red cabbage and hot German potato salad, or crispy pasta chips loaded with sliced pepperoni and sausage in a marinara sauce. Then top off this hearty lunch with an Italian cream horn or Norwegian baked Alaska. You might even return for an afternoon snack of Greek baklava.

World-Fest closes on May 6. If you cannot attend this year, put the acclaimed event on your travel list for next April. The international groups may vary, but the immersion into different cultures, music, and food is a constant to open the season at Silver Dollar City, the Midwest’s premier place to play.