You are here: Home / Blog / RV Travel Tales: Professional Volunteers
This post may contain affiliate links or mention our own products, please check out our disclosure policy here. 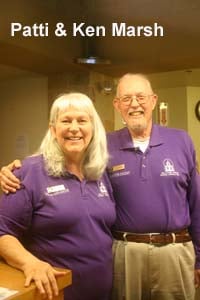 My job as a writer affords me the opportunity to meet numerous interesting individuals; some of whom have exclusively chosen volunteerism as their Workamping lifestyle. When Lee and I met Ken and Patti Marsh as they served as interpreters at San Antonio Missions National Historical Park, we discovered that they are indeed professional volunteers. We also noted that they thoughtfully planned for their lifestyle.

“For four years, we researched RVing,” Patti says. “Since we are drawn to old houses, we were drawn to a vintage coach.” They found their 1989 Wanderlodge Bluebird, and bought it two years prior to the sale of their Minnesota home and their ultimate retirement. “Basically, we have a house that drives down the road,” Patti continues. “We had to do maintenance on our house built in 1929, and we have to maintain our coach.”

Seven feline traveling companions are their first priority. “We didn’t want slide-outs because every time we roll, we don’t want to take census to make sure one is not caught in a sliding room,” she says.

Volunteerism is another thing the Marshes plan. “We try to line up volunteer jobs a year in advance,” Patti says, noting that she follows Workamper News forums, and also marks her issues with positions of interest. “I inquire about different possibilities and plan ahead. I save my issues and pull them out when I start looking for future volunteer roles.” 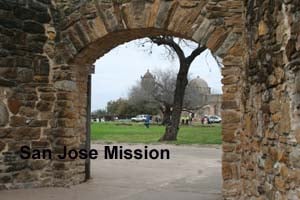 After reading about the San Antonio Missions on Workamper Forums, they applied at the National Historic Park, as well as the Lyndon B. Johnson State Park in Texas Hill Country. “We received calls from both places,” Ken says, “but we were committed for that year at the Battleship of Texas in Houston.”

Ken and Patti left the Battleship, a volunteer role in which Patti made good use of her fine arts education, and took their roles as interpreters at the Missions. They returned to the Battleship of Texas for 2010-2011 season and the curator was “…making her to-do list.”

Also, they volunteered at the Sauer-Beckman Homestead-Preserve, a part of the LBJ State Park. “The place is a working farm, depicting life between 1915 and 1918,” Patti says. “Every day, workers cook a noon meal. When one walks into the kitchen, the aroma of baking bread fills the air.”

A mid-wife in the Sauer family delivered Lyndon Johnson, Patti explains. Growing up, the Beckmans were his peers. The last of the Beckmans lived on the farm when Lyndon Johnson bought the property and gave directions to make it part of the state park. All buildings are intact and the original cabin remains on the property. Ken Marsh says: “I did everything the rangers did; only I didn’t get paid.” He notes that after spending 43 years in a laboratory as a chemical engineer, he enjoys being outdoors. “We cut trees, painted, and cleaned restrooms.”

Patti interpreted in the cabin and wore period dress. “I shadowed the interpreters until I learned the history,” she says. “Rather than depict members of the family, the Farmstead portrays the time period—what it was like without running water or electricity.” 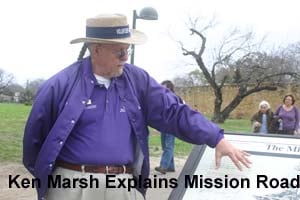 In training at the Missions, Ken and Patti shadowed rangers and docents to learn how to give the 45-minute tours, primarily at Concepcion and San Jose Missions. They were given historical reading material. At San Jose Mission, Ken also trained to demonstrate at the grist mill. During their assignment, they spent two days at San Jose and one afternoon at Concepcion, making 24 hours per week on duty.

“We’re only willing to volunteer 24 hours weekly,” Ken says, although they put in a long week building the façade of the house on the Battleship at Houston. “If we work beyond those hours, it negates our purpose of retirement. We like volunteering for non-profits such as federal and state parks, and historic sites. We don’t need the income, so we’d rather volunteer and pay back where people come to enjoy the resources. Also, the commitments are shorter. 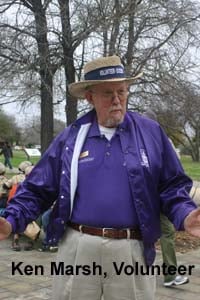 “Distance means little to us,” Ken continues. “We’re more interested in the places than a particular location. We consider ourselves professional volunteers and we’ve been welcomed and had fun every place we’ve worked.”

In our travels and our own stints as volunteers, Lee and I have discovered that volunteerism often affords us to live on some of America’s prime property. Quite possibly, volunteers are the only persons who get to live there for an extended time. Also, volunteers often tackle tasks that rangers and staff do not have the time to accomplish. We applaud Ken and Patti Marsh—and others who are giving of themselves to support resources for future generations.