You are here: Home / Blog / RV Travel Tales: A Mountain Farm Museum
This post may contain affiliate links or mention our own products, please check out our disclosure policy here. 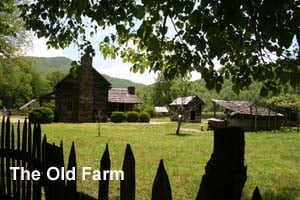 On a warm spring Sunday, Lee and I visited the Oconaluftee Visitor Center for the Great Smoky Mountains National Park, located near Cherokee, North Carolina. The Visitor Center adjoins the Mountain Farm Museum, an open-air museum with a collection of historic log buildings gathered from throughout the Smoky Mountains and preserved on this site to give a sense of how families may have lived 100 years ago. Most of the structures were built in the late 19th century and were moved to the Oconaluftee Visitor Center site in the 1950s. The John Davis farm house, separated by a picket fence from the gurgling Oconaluftee River, is the centerpiece of the property. John Davis moved to the Oconaluftee Valley in 1885 to free-range his livestock, and built his cabin in 1890 on Indian Creek several miles to the west above Bryson City. Considered small by today’s housing standards, the Davis House was more spacious and comfortable than the homes of many folks who settled in the area. Although hand-hewn lumber was available, and often the choice for builders at the turn of the 20th century, Davis opted to build his home from chestnut. The cabin offers a rare chance to view a log house built from matched chestnut logs before the chestnut blight decimated the American Chestnut in our forests during the 1930s and early 1940s. The logs were joined with dove-tail notches. Instead of the typical chinking between the logs with mud or clay, Davis used hand-split boards to fill the cracks. 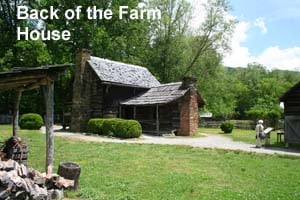 Although mountain houses were generally small and families were generally large in that day, people spent much of their time outdoors working their fields, gathering and preserving food, and splitting firewood for fuel both to cook and to warm themselves in the winter months. Examples of the various buildings and work sites that made up a prosperous farm are located on the homestead grounds. Remnants of an apple orchard stand to one side with an example of bee hives behind them. Additional log buildings include the smokehouse for meats, usually built close to the main house with a lock on its door, and corn cribs for storing and drying their primary crop. Two corn cribs, built around 1900, were moved from Thomas Divide, just north of Bryson City. Corn crib roofs were often raised to place the recently-cut corn crop inside. A large pitchfork was used to remove the corn via the small square doors when it was time to take the corn to the mill to be ground into cornmeal or to shell from the cob to feed animals. Hickory King was the variety of corn grown at that time, and not what we find on our grocery selves today, although it is edible. This type of corn is more readily adapted for stock feed and cornmeal. 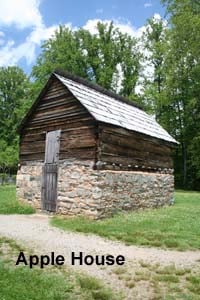 This farm also has an apple house built by Will Messer in the Cataloochee Valley located within the park on the other side of Cataloochee Mountain to the east. As signage shows, at its original location, the apple house was partially underground to help insulate it from the summer heat and winter cold. For mountain people, apples were a mainstay in their diet, eaten raw or cooked into applesauce, apple butter, and pies. Apples also made cider and vinegar.

Other buildings include a woodshed, a hog pen, and the ever-present privy. The farm also boasts a blacksmith shop moved from Cades Cove. Not every farm had a blacksmith shop, but the ones that did often bartered the services of a forge with neighboring farms. The Farm Museum has a sorghum press and still, used to draw sorghum from cane and boil it into syrup called molasses—or sometimes in mountain vernacular, just ‘lasses. During the Mountain Life Festival the third Saturday in September, the cooking of sorghum molasses is demonstrated. An ash hopper is on the property with signage explaining how water was filtered through the ashes to extract its lye, which was then mixed with hog lard to make the soap they used for everything from bathing to laundry and dish washing. Another festival called Woman’s Work Festival, happening now through June 17, showcases chores such as laundry, food preservation, cooking, basket weaving, and the making of lye soap. 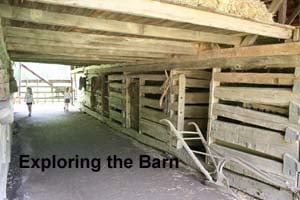 The old barn is original to the site, although it has been moved to a different spot. Called a drovers’ barn, the structure was like a hotel for animals. Farmers driving their herds to Knoxville needed two days to cross the mountain. They would overnight at a drovers’ barn, giving their animals shelter. 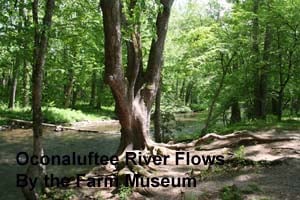 Gardens with heirloom vegetables are planted during the spring and summer, and barn fowl roam around the house and barnyard. Although the buildings at the Farm Museum would have been located on the hillsides rather than on the flat valley floor that was valuable for croplands, the sense of a peaceful, simple life permeates the property behind the picket fence. I could visualize the family going about their daily chores, and then gathering on the front porch at twilight for mountain music and conversation. Perhaps, some even strolled down what is now the Oconaluftee River Trail, shaded by a canopy of hardwoods. The trail travels 1.5 miles one-way from the Oconaluftee Visitor Center to the outskirts of the city of Cherokee, North Carolina, and is one of two walking paths in the Smokies on which visitors can walk dogs and ride bicycles.