You are here: Home / Blog / Great Escapes: Sumpter, Oregon
This post may contain affiliate links or mention our own products, please check out our disclosure policy here.

When prospectors first discovered gold near Oregon’s Powder River in 1862, the gold rush of eastern Oregon was on! In fact, over 10,000 mining claims were filed in Baker County during Oregon’s gold rush, and boomtowns like Sumpter sprang up almost instantly. To get a sense of this area’s rich history, visit the “Queen City” of Sumpter, a gold mining ghost town still surrounded by gorgeous scenery. Although many private and federal mining claims still exist today, don’t let that stop you from finding a fortune (or at least have fun trying) around Sumpter. Bring your own gold pan or metal detector and try your luck— just be careful not to trespass on posted claims. 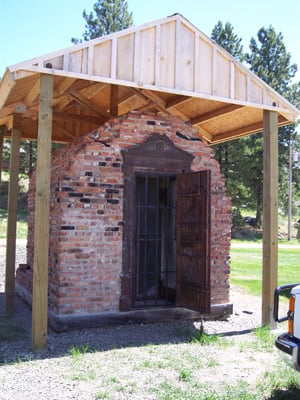 By the early 1900s, numerous hard rock gold mines were operating around Sumpter, and over 80 businesses served a population of about 3,000. The mines began to lose yield after 20 years or so, but then dredging commenced in 1913 and the townspeople prospered once again. Altogether, about $10 million in gold was recovered here. Finally, in 1954, when expenses outweighed profits, the clattering of the dredge buckets was forever silenced. Mining operations ceased, folks moved on to find other jobs, and Sumpter eventually became a ghost town. The former Queen City is not completely deserted today, though. The sparse year-round population isn’t much more than 170, but you’ll find RV parks, restaurants, a country store and a gift shop to meet your needs. Be sure to take a look at the still-standing Sumpter Bank vault as you stroll around town. If you’re a bargain shopper who doesn’t mind crowds, an annual flea market each Labor Day weekend brings in thousands of visitors.

At the Sumpter Valley Dredge State Heritage Area on the edge of town, step aboard the massive 1,240- ton YUBA style dredge. Not many gold dredges are still on public display, so it’s fortunate we can visit one of the largest and most accessible in the country. Built at a cost of $350,000 in 1935, it produced $4.5 million in gold until 1954 (gold was then $35 an ounce), and was actually the third dredge to be used during that time period. It’s hard to believe all that bulk actually floated on its own small pond, but that’s exactly how the dredge moved from place to place—digging into the soil in a sideways pattern creating a constant pool of water that came from the Powder River. The dredge ran 24 hours a day/7 days a week in all weather, requiring three shifts of about 20 men each. The workmen had just two days off each year- Christmas and Independence Day- and earnings were only 90 cents an hour for oilers and $1.10 per hour for winchmen. What a way to make a living! 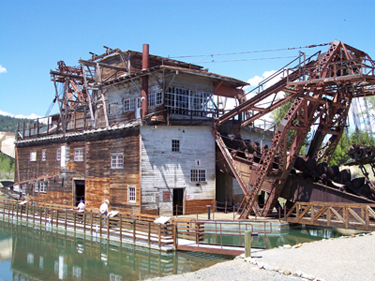 All aboard for Sumpter Valley Railroad! After you dream of striking it rich on the dredge, ride the rails of the steam-powered train that originally hauled millions of dollars of gold ore and timber from the Elkhorn Mountains between 1890-1947. The 5-mile trip between Sumpter and McEwen stations runs weekends and holidays from Memorial Day through the end of September. 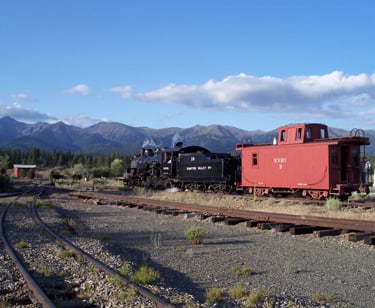 Click here for more to see and do in historic Sumpter, Oregon.

Get more information online about Sumpter Valley Dredge State Heritage Area or call (541) 894-2486. There is no fee to visit.

Click here for more information on riding the Sumpter Valley Railroad, or call 866-894-2268