You are here: Home / Blog / RV Travel Tales: Visiting Devils Tower
This post may contain affiliate links or mention our own products, please check out our disclosure policy here. 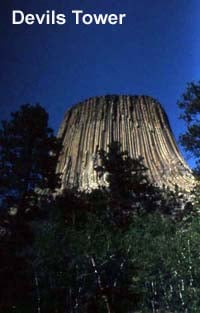 Majestic—Mysterious—Sacred Ground–Meeting Place—Bear Lodge—Scientific Wonder—Landmark. All of these words, and many more, define Devils Tower, the first national monument designated in 1906 by President Theodore Roosevelt under the new Antiquities Act. The president’s proclamation made Wyoming home to both America’s first national park, Yellowstone, and the nation’s first national monument. The stone tower stands over 1,200 feet above the Bell Fourche River that scientists believe freed it from the layers of earth that once covered its 867-foot height over 60 million years ago. Several Native American nations share legends on its origin. Most stories include children escaping a bear that gouged the deep groves on the stone as the butte rose from the earth to save the young ones from deadly claws. On early regional maps, the formation was named Mateo Tepee, translated to Bear Lodge. Later information claims the tribes called this upright shaft of rock “the bad god’s tower.” In 1875, Colonel Richard Dodge, who led a military expedition into the Black Hills to survey the area, translated into their description into English and named  the landmark mass of rock Devils Tower. 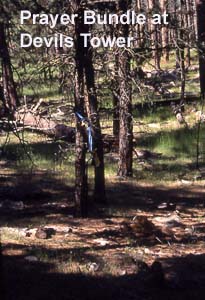 At the time men were seeking gold in the Black Hills, scientists thought Devils Tower was the core of an ancient volcano. More recent data suggests it is instead molten magma forced into sedimentary rocks above the hot lava. Those rocks cooled underground, causing the formation to contract and fracture into columns. Over millions of years, erosion exposed the sedimentary rock. A trail circles the tower’s 1,000-foot base. Boulders and six-sided stone columns up to 25 feet in length and eight feet in circumference litter the surrounding woods. The Arapaho, Cheyenne, Crow, Kiowa, Shoshone, Sioux and other tribes consider the land sacred. Visitors find prayer bundles nestled in many of the Ponderosa pine trees along the circular trail.

Although the geological formation of the Tower is fascinating, I am most engaged by the stories of long ago. Even after Devils Tower gained national monument status, the giant landmark remained isolated. During the late 1800s, settlers had moved into the region. At least once or twice annually, neighbors gathered around its base to camp and picnic, traveling over unimproved roads or on mere trails by horseback, wagon, and buckboard. In the 1890s, travelers had to ford the Belle Fourche River seven times to reach Devils Tower for their camp meetings. On July 4, 1893, ranchers William Rogers and Willard Ripley supposedly made the first ascent to the top of the tower, using a 350-foot wooden ladder they had built by driving pegs of native oak, ash, and willow into a continuous vertical crack between two columns on the southeast side of the stone tower. About 1,000 people assembled to celebrate the first people to stand on the Tower’s top. Many traveled over rugged terrain for two or three days to arrive at the advertised event. When the two ranchers unfurled an American flag specifically made for the day, they already had a 12-foot flag pole waiting to fly Old Glory. Perhaps, July 4th was not their first ascent? 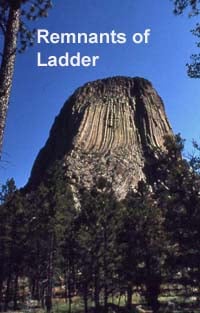 The two men’s wives sold refreshments to the crowd at the base. During the afternoon, a gust of wind tore the flag loose and it drifted down to the woods surrounding the Tower. The promoters tore it into pieces and their wives offered scraps of the flag as souvenirs—for a price, of course. After that history-making climb, Devils Tower became a Fourth of July meeting place for families from area ranches, who did not typically see each other except on that annual occasion. At the July 4th picnic in 1895, Mrs. Rogers used her husband’s ladder to become the first woman to reach the Tower’s summit.

Records of Tower climbs have been kept since 1937. Approximately 5,000 climbers arrive each year at Devils Tower from all over the world to climb on the massive columns. All sides of the Tower have now been ascended, and 220 routes are mapped on the wall of the Visitors Center. On almost any day, climbers are spotted along the hexagon-shaped columns, looking like an army of ants when viewed from the ground. Since that first climb back in 1893, only five climbing deaths have occurred at Devils Tower. 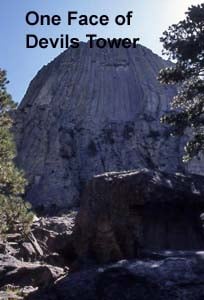 Over the years, other interesting events have happened at Devils Tower. In 1941, a professional parachutist, George Hopkins, pulled a reckless stunt parachuting from an airplane to the teardrop-shaped top of the butte. His plans to make his descent to the bottom of the monument on a one-half inch rope dropped from the plane went awry when the rope landed on the side of the Tower. He could not reach it. Despite Hopkins’ lack of permission from the National Park Service to land on the Tower’s top, his rescue turned into their problem. Blankets and food were dropped to the stranded stuntman. Jack Durrance, a student at Dartmouth College, and also a skier and mountain climber who had led the second assent using mountain climbing techniques three years earlier, led the rescue party. During the six days that Hopkins remained on the top, over 7,000 spectators gathered to witness his rescue. In 1942, visitors to the monument numbered 20,874. After the beginning of WWII, the crowds dropped to less than 7,000 people annually. 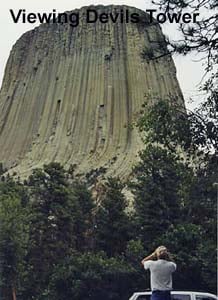 However, in 1977 Devils Tower once again took the spotlight nationally as the setting for a spaceship landing in the popular movie, “Close Encounters of the Third Kind.” The American public became curious. Many believed that the Tower existed only as a special effect for the movie. As word got out that the natural wonder had indeed raised on a Wyoming plain, the numbers of visitors shot up like a rocket. Today, over 450,000 visitors admire the dramatic giant butte, not as a space ship landing, but for its awesome presence.

Someone said a column has not fallen in 10,000 years, but…I wondered that day I tramped around the awesome tower of stone if it might be the time another one came crashing down from the weathered rock’s sides. No one knows. If time, winter freezes, and spring thaws should release more slabs of stone, will the rock climbing cease? Perhaps. Until then, Devils Tower National Monument continues to challenge one’s imaginations—those who conquer the Tower, and those like me, who simply want to stand in its shadow.