You are here: Home / Blog / RV Travel Tales: One of Many RVing Misadventures
This post may contain affiliate links or mention our own products, please check out our disclosure policy here.

RVing is not for the faint of heart! No matter how new the rig or how prepared we think we are, there are always mishaps, misfortunes, misadventures—or even a major calamity from time to time. On a trip to Northwest Arkansas only about six weeks prior to my late husband’s death, I tried to straddle the motorhome over a piece of a trucker’s tire tread in the middle of my lane on Arkansas I-540. I thought I had missed the stray slab of rubber. However, after visiting my sister in Fayetteville, we hooked up to return home on a very hot August day and the left side jacks would not come up. Now understand, my on board husband suffered from kidney failure. 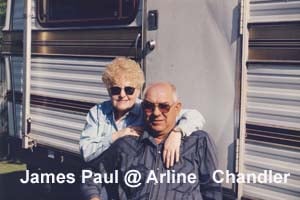 I got under the motorhome to inspect and discovered that the disks the left jack cylinder sit on had been knocked off; the footless jacks had been lowered to the ground. “Probably happened when I hit that tire last Friday,” I muttered to myself.  I went next door to ask our neighbors if they knew a serviceman I could call. Even though they were both ill with a stomach virus, Ida and Jodie bounded out of their trailer to help. Jodie heaved himself from the trailer steps into his wheelchair and maneuvered to my motorhome. Despite the fact he is a man minus two legs, he slipped to the ground and rolled under the coach. Another neighbor, Phyllis, who had recently undergone chemo for breast cancer, showed up and insisted the jacks were low on hydraulic fluid. She sent me to look for my instruction manual. By that time, my husband and Jodie were both trying to release the valves for the hydraulic fluid, but they were too hot to touch.

Ida gave me the name of an RV serviceman in Springdale, a northwest Arkansas town that borders Fayetteville. I went to the park’s pay phone to call him. (No such thing as a cell phone in my pocket.)  He listened to the description of our problem and said we had real trouble!  Then he offered to call his service man, who had been out of the shop for a week. He quickly called back to the public phone and said his man was working somewhere else that afternoon. However, he offered his home phone number to call that night.  He had also called other service companies in Springdale and not one could help. Phyllis told me of a different serviceman in nearby Tonitown, but I could not find his name in the phone book.

My husband, J.P., had plugged our electric back up so we could have air conditioning in the coach. He suggested that I call our dealer in Russellville, which is located two hours south of Fayetteville, and ask if he could make a service call from his satellite store in Van Buren, about an hour from Fayetteville.  I called and the dealer said we did not have a big problem. “The springs attached to the disks pull up the jacks,” he said. “So get someone to manually push up the jacks, and clip them back in place.”

I said, “In other words, any mechanic could do it.”

The dealer replied: “You don’t need a mechanic. Any ‘body’ in your RV Park can get under there and do that!”

I looked around. There were three rigs in that small park, each with a disabled man.  Phyllis had had breast surgery and radiation; Ida had the stomach flu.  So who did that leave?

I shouldered my oversized purse, climbed into our mini-van, and set out to find a “body.”  School Avenue in South Fayetteville is not exactly the elite of the city. I stopped at the first auto place down the street, went in, and presented my dilemma. The little round man behind the desk, speaking in broken English, asked f I had noticed the auction building down the street. Yes, I had. “Behind it, a man named Clyde works in a garage. He’s kind of scroungy-looking,” the man said between puffs on his skinny cigar. “Don’t let that put you off.  He’s very good!  And if you don’t find him, come back.  He lives in the first apartment behind our place.”  After looking over the short puffing man, I wondered how he defined scroungy!

I returned to the auction building down the street. The garage behind was junkyard art—and closed. Old cars and parts blocked the double doors. Weeds grew higher than my head.  A little up the road, my eye caught a house with people hanging out on the porch rails. One guy wore very low-rider pants, almost to the point of “mooning.” Kids screamed and cried.  I walked around the garage, peeked in the windows, and knocked on a door. No Clyde. So I went back to the first garage. He directed me to the apartment behind their building. “A white Oldsmobile is in the driveway,” the round man said, this time from underneath a car. I pulled my van into the driveway behind and got out. Dogs furiously barked from inside and a window bore a hand-written sign that read: “In case of fire, save our pets!”  I knocked. Then I knocked again. I thought if my sister could see me standing at this stranger’s door, she would absolutely have a fit!

Clyde wasn’t at home, or he didn’t come to the door. So I left and went on down the street, stopping at an O-Reilly Automotive store. They had no one to help me. There was a garage beside the store, so I walked there and related my problem to the mechanic on duty. He was booked up a week in advance. Besides, he did not work on motorhomes. He suggested that I call several RV service places, which I had already done. I returned to the automotive store and the man behind the counter told me about Kim in a blue building just around the corner at the stop light. I drove in that direction. Again, an absolutely classy joint! The building’s bright blue exterior contrasted the gray desperation I felt. An assortment of broken-down vehicles surrounded the colorful garage.

I made my way to the door, stepping over car parts and greasy spots on the bare ground. I asked if this was Kim’s.  A man small in stature man grinned and said, “It depends.  Are you a bill collector?” I told my story again. Like the other mechanic, he did not work on motorhomes, he said.  But, he would send one of his service guys over in about 25 minutes to help me out. “Although I don’t normally do this,” he tacked onto his sentence. I left, wondering if anyone would show up.  But in less than 20 minutes, a gangly lad, greasy and with missing teeth and a long pony tail, knocked on our door and said that Kim had sent him. He crawled right under the motorhome, his feet in scruffy ankle boots and red socks sticking out the legs of too short frayed jeans. Within minutes, he pushed the jacks back into place, and secured them. Then he checked everything on the coach’s underbelly. He found a clamp loose on the muffler pipe. When I asked for a bill, he said, “Mr. Kim didn’t say nothing about a bill.”

“How much do you usually charge for a service call?” I asked. He didn’t know. He’d never made a service call. Then he said, “Oh, $15 and Mr. Kim will be happy!”  I gave him a $20 bill and thanked him profusely. I was so grateful for Mr. Kim–and the young man, whose name I never knew.

By that time, it was 3:00 p.m. We unplugged the electrical cord and decided to drive on to Russellville, which was about halfway to our home in Heber Springs. We arrived about 5:00 p.m., had a nice dinner, and went to bed very early. I wondered what adventure or misadventure the next day would hold. For sure, another one came along! But that’s another story….