You are here: Home / Blog / Great Escapes: Meet Winter, Star of the Dolphin Tale, at Clearwater Marine Aquarium
This post may contain affiliate links or mention our own products, please check out our disclosure policy here. 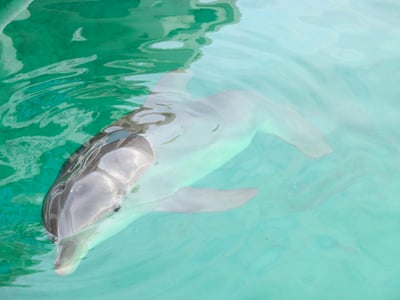 If you’re not familiar with the Dolphin Tale movie released in September 2011, the star of the film is Winter, a bottlenose dolphin. Throughout the film, which also stars Morgan Freeman, Ashley Judd, Harry Connick, Jr., Kris Kristofferson and Nathan Gamble, Winter overcomes overwhelming odds and obstacles. Gravely injured after becoming entangled in a crab trap line, she is rescued, rehabilitated, and fitted with a prosthetic tail. And before the final credits roll, the lovable dolphin has captured your heart. Today, Winter attracts throngs of visitors to her home at the Clearwater Marine Aquarium in Florida. Not only is it fun to see this unassuming movie star up close, but you also get to see and learn about other rescued marine life —sea turtles, stingrays, otters, sharks, and more — who also make their home here alongside Winter. 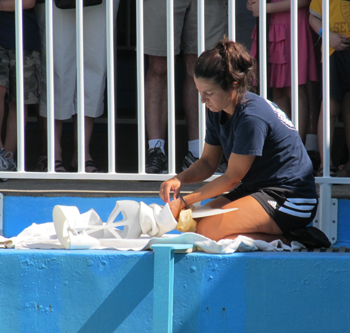 As aquariums go, Clearwater Marine Aquarium is on the small size. But the big attraction is definitely Winter. Not since Flipper, has a dolphin been so popular, which is evident in the crowds and long lines that can sometimes plague the aquarium. Skip weekends and instead consider arriving after 3:00 pm on a weekday. You can easily cover the aquarium’s attractions in about an hour. Depending on the time of your visit, you’re likely to see the aquarium staff fitting Winter with her prosthetic tail. Contrary to what you might think, she doesn’t wear it all the time. When she does, it’s more for physical therapy; she doesn’t need her new tail in order to swim.

Panama, another dolphin in the movie, puts on quite a show for visitors by jumping out of the pool when instructed by trainers. This is especially amazing because Panama is deaf. Families can get their photo taken with Panama and other dolphins, take a behind the scenes tour of the aquarium, become a trainer for a day, and participate in stingray feedings for an additional cost. 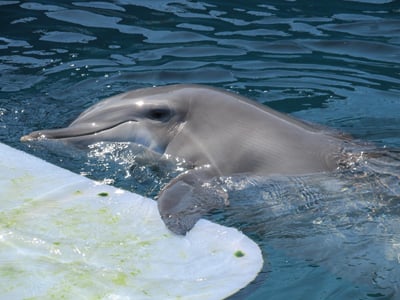 Clearwater Marine Aquarium is a non-profit 501(c)(3) organization, whose mission is to restore and preserve the marine environment. This mission is accomplished through leadership in education, research, and the rescue, rehabilitation, and release of marine life.