You are here: Home / Blog / Broken Boondocking Bliss!
This post may contain affiliate links or mention our own products, please check out our disclosure policy here.

Some friends recently joined my wife and I for a boondocking outing in Western Washington. We staked out a nice open grassy area with room for the dogs to run and play having the whole area to ourselves. The next day we went on a hike to a nearby waterfall which lasted several hours. 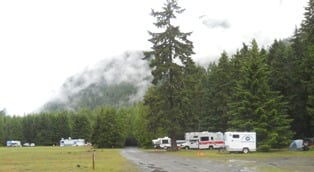 As we walked back towards our RVs after our excursion we were surprised to see other vehicles in the clearing where we were camped. As we progressed closer we realized it was more than a few vehicles it was scores of vehicles, including other RVs, ATVs, trailers and command vehicles along with a small tent village that had appeared several hundred feet from our campsite. It was a beehive of activity with people scurrying about, vehicles moving and most disconcerning, generators running! Most boondockers would think to themselves, “there goes the neighborhood”. But, being a search and rescue member, I quickly realized the onslaught of new neighbors for what it was. A full scale search and rescue operation was gearing up. Walking by one of their members on the way back to our camp I inquired about their mission learning it was just a training exercise and no one was lost or injured. From experience, I knew a training mission would wind down in the evening with generators being shut down and members getting some sleep to resume training the next morning. They ended up being very quiet neighbors and enjoyed our dogs stopping by for a visit or two.

Being over run in the boondocks by local search and rescue, just another adventure in RVing!

Note: Search & Rescue members serve at their own time and expense. The life they save may be yours! To learn more about search and rescue divisions in Washington State click here.