You are here: Home / Blog / RV Travel Tales: Finding a Gold Nugget in Wickenburg, Arizona
This post may contain affiliate links or mention our own products, please check out our disclosure policy here.

Lee and I enjoy the western-styled town of Wickenburg, Arizona, and typically visit its sidewalks once we stay for a week at the Escapees Rainbow Park, North Ranch. We have walked on the streets, admired the lifelike sculptures depicting characters of long ago, and toured the Desert Caballeros Western Museum. Yet, there is always something more to find in a town like Wickenburg. When friends, Art and Lois Zumwalt, treated us to dinner at the Gold Nugget we discovered a Wickenburg Landmark. 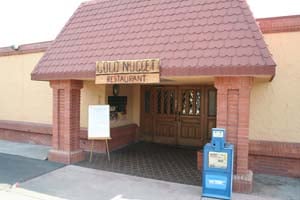 The restaurant’s history is compelling and its atmosphere creates a fine dining experience. In western tradition, the Gold Nugget serves prime rib and steaks from rib eye, porterhouse, and top sirloin to New York strips and filet migon. Still, the menu goes on to include baby back ribs, Alaskan king crab, Teriyaki shrimp, pork chops, and stuffed chicken and shrimp. Sandwiches, soups, and an array of appetizers fill out the menu. And that’s just for dinner. Breakfast and lunch are also served. 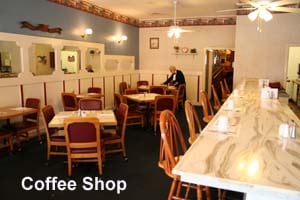 The restaurant’s main building was first built in 1863, and the coffee shop, now located on the sidewalk entrance, was added in 1890. A building to the west that was originally Murphy’s Grocery and the local post office made up part of the coffee shop. On the east side of the restaurant, a livery stable operated and around 1900, the restaurant expanded to include that area. Presently, the gift shop takes up that space. 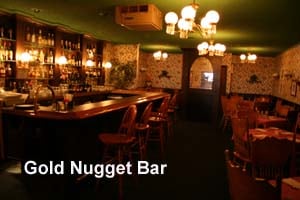 During the late 1930s, the post office in the old store building converted into a saloon. During a 2006 renovation, workers uncovered an old sign for The Santa Fe Café. A resident of Congress remembers that two Greek men, the Bakas brothers, opened the restaurant during the 1940s. Mac McMillin recalls the Santa Fe had good food, good prices, and a bus stop. Some of the fixtures from that Café are still in use. In 1952, the back portion of the restaurant was added, expanding the establishment to approximately 8,000 square feet, including a three-tier main dining room, an alcove, foyer, and conference room. However, a fire all but destroyed the building in 1980. The business was rebuilt with lavish appointments, including “The Rose” stained glass window, fine oak woodwork, rare antique chandeliers imported from France, and a gleaming black baby grand player piano. 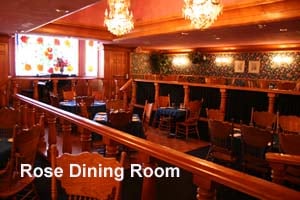 Rumors abound that the Gold Nugget has a resident ghost. The tale goes that a farmer frequented the dining room, looking for a wife. He was smitten with a waitress’s honey-toned voice. Alas when he dropped to his knee to present the lovely young woman an engagement ring, her husband in the top tier of the Rose Room pulled his six-shooter and dropped the bold admirer in his tracks. Many claim that he never left the premises and often raises and lowers the fancy chandeliers and moves the salt and pepper shakers from table to table. One says the true evidence of the farmer’s continued presence is a low, haunting, off-key melody coming from the baby grand piano with the rose window reflected in its polished patina. 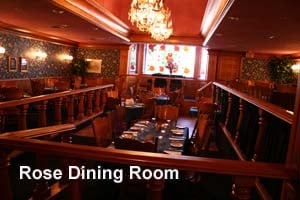 For more information about the Gold Nugget, a look at their menu, and a listen to the story of the farmer and the waitress in a short video, go to http://www.goldnuggetrestaurant.com/index.htm