You are here: Home / Blog / RV Travel Tales: An RVer’s Trademark
This post may contain affiliate links or mention our own products, please check out our disclosure policy here. 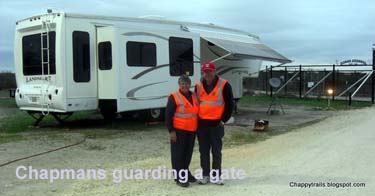 Bobbie Chapman, a full-time RVer and a busy Workamper, says “You are loved…” to everyone she meets. “Why?” I asked. She explained a lesson she learned back in1998 when she worked as a librarian aide at Alamosa High School in Colorado. The librarian bought a big hotel-type desk bell for students to slam for service. “The kids pounded that bell, no matter if I was at the desk or not,” she says. “Ding, ding, ding. I heard that clang at least 100 times a day.

“One weekend, I prayed for guidance to limit the irritating sound,” she continues. “Finally, I came up with a solution. Every time a student dinged that bell, I would call out: ‘I love you.’ I figured no ‘cool’ teenager wanted some old grandma yelling ‘I love you’ at every bell ring. I thought to myself…a couple of days and the noise will end.”

Monday morning, the first young man walked into the library and hit the bell some 12 inches from Bobbie’s face. With a big smile, she thundered out: “I love you.” The student’s mouth dropped open in surprise. He sat down at one of the tables, Bobbie recalls. “The next few kids came in, rang the bell, and heard my new greeting. They appeared amused. A few smiled. As the day wore on, each bell ringer heard ‘I love you…’ from somewhere in the library.”

Word traveled quickly around the school. The message?  Go to the library, ring the bell, and see what happens. “Kids I’d never seen before came to the library and slapped a fist on the bell,” Bobbie continues. “From a corner of the library where I stacked books, I gleefully called out, ‘I love you.’ Regulars brought in new kids and stood back to watch their reaction to a baffling ‘I love you…’ coming from the bookshelves. It became a game.  My strategy for ending the constant clang did not work.”

One Friday afternoon several months later, the dismissal bell had rung and the students filed out of the building and onto the school buses. Bobbie relates that one lone boy hung back. “He looked me in the eye and pounded the bell. I smiled and loudly said, ‘I love you.’ He continued to hold eye contact and clanged the bell again. Now with an inquisitive look, I said, ‘I love you.’ Then, he rang it once more. That time, I said ‘I love you’ slower and with more emphasis. The teenager smiled and said; ‘Thank you.’

“As he turned to leave, I asked why he had rung the bell three times. He said, ‘Because it will be three days until I hear anyone say ‘I love you,’ and those times will have to hold me over until I see you on Monday.

“As he turned and ran out the door, tears fell down my cheeks. To think a kid wanted to hear that someone loved him so much he would ring a desk bell just to hear the words. My heart broke.”

Bobbie says from that day on, the constant clanging of the bell never bothered her. She continued to shout out “I love you,” but with more heartfelt meaning. For the next five years at that library, “I love you” became her mantra. She said it to students, to teachers, to the principal, to cafeteria cooks, and even to friends who called on the phone. Graduating students returned to visit and stopped by the library to say that her words, “I love you” were one of their favorite memories of high school. “That warmed my heart,” Bobbie says. “God knew what He was doing when He answered my prayer about that annoying desk bell.” 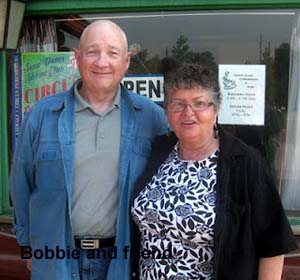 Bobbie changed jobs and continued to say, “I love you” to customers, sales people—to everyone. The words—and the love—became part of her. As she moved into Workamping and started writing her personal blog, she used “You are loved” as her closing line. The phrase stuck. She had learned back in that high school library that people need to hear they are loved at every stage of life. 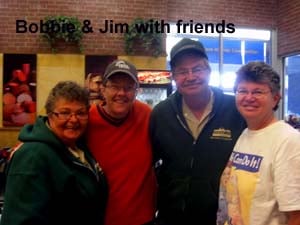 As Bobbie and her husband, Jim, began full-time RVing and taking Workamping jobs, she incorporated her “You are loved…” into every situation from three seasons at amazon.com, at both Coffeyville, Kansas, and Campbellsville, Kentucky, and as an area manager supervising camp hosts in seven national forest campgrounds in south-central Colorado. Everywhere she travels, the phrase “You are loved…” goes along.

In the winter of 2012, Jim and Bobbie worked as security personnel for Gate Guards, Inc. in South Texas. The gate they unlocked and closed for workers and property owners to pass through opened to an oil rig and a deer breeding ranch. Bobbie’s congenial manner quickly developed friendships with truck drivers and ranchers when she wrote down their information and waved them through with, “You are loved….” Her camaraderie with property owners was evidenced when one man showed up on Valentine’s Day bearing choice New York strip steaks from his own grass fed cattle. When Bobbie told him she didn’t eat beef (a real sin in Texas), he returned with two pounds of wild Texas shrimp. “I think he liked us,” Bobbie says. “We had a nice Valentine’s Day dinner.”

Ever since that afternoon in a high school library when a teenage boy confessed that her statement of love would get him through a lonely weekend, Bobbie has never underestimated the power of those three words. Kind of like the Escapees’ hug, Bobbie’s trademark is, “You are loved…”

The Chapman’s RVing adventures are documented on her personal blog: http://chappytrails.blogspot.com.