You are here: Home / Blog / RV Travel Tales: Is Travel With Life-Threatening Illness Possible? Yes!
This post may contain affiliate links or mention our own products, please check out our disclosure policy here. 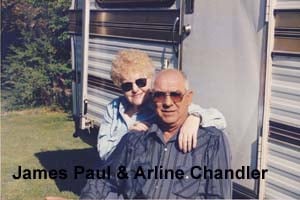 For eight months, my husband had see-sawed between life and death. His kidneys failed. He had endured weeks in and out of hospitals and the adjustment to peritoneal dialysis. During his most depressing days, I dangled the thought that we would travel again to Idaho—a trip we had made for the previous three summers while I taught classes at a conference called Life On Wheels. I did not believe he could travel with his life-threatening illness, but I kept the dream alive.

Our 37-year-old son, dying from end-stage liver failure, lived with us. I was primary caregiver for both men, although our RN son managed most of his own care. He, too, was in and out of the hospital. Some weeks, I did not know which one of my men I would lose first.

Previously, we had traveled in a truck that pulled a fifth-wheel trailer. However, with additional passengers—Tim and his dog, Carmen—we ordered a new motorhome, thinking a coach would make travel more comfortable for the two of them.  Despite the seriousness of his illness, Tim remained adamant about making the trip. We carried insurance to transport James home in the event of hospitalization—or death, but no company would insure Tim. We took the risk and made preparations for the month-long journey.

Family and friends raised eyebrows and asked if I was insane to start out on the roadways with two seriously ill men. A few muttered the word, “brave.” Honestly, I gave neither comment any thought. My two men were desperately ill, but I trusted God that we would travel safely and without mishap. I trusted that I would reach those at the conference whom God had waiting for me.

To accommodate his dialysis, every month James received a shipment of dialysate, ordered in bags of different strengths according to the records I kept of his daily weight and blood pressure. The company shipped anywhere in the country, but I had to calculate if the bags we could carry in the motorhome bays would be sufficient until we reached Moscow, Idaho. The service of this company made travel possible. However, patients using hemodialysis can schedule visits to clinics along their routes.

Once, I had supplies shipped to a park outside Denver. And on a subsequent trip, my husband developed peritonitis, which is not uncommon for peritoneal dialysis patients. We were in Missouri. I called the nurse at his clinic in Arkansas and she had the proper medication overnighted to us. On another trip, the machine that he used nightly for the dialysis exchange stopped working. I called the 800-number posted on the front panel and a person in Florida answered. Again, we were in Missouri, but at a different location. A new machine was flown from a nearby warehouse to the Springfield Airport and a courier delivered it to my motorhome door in less than 24 hours. Services are available for those who want to remain on the road.

On this particular trip to Idaho with my son and my husband, medications for both men were another consideration. Additionally, I had to prepare outlines and materials for nine classes that I presented at the University of Idaho. Then, we had to pack clothing and foodstuff—enough for three adults and a dog.

I was the primary driver, as well as caregiver.  However, on our departure day, Tim insisted that he felt better while driving.  For most of the miles, he drove and I sat in the passenger seat with my computer at my pull-out desk. Carmen stretched half of her pit bull body across my lap. James rested in the bedroom. Sometimes, Tim pulled over on the shoulder due to waves of nausea. His color turned slate gray and his big blue eyes sank into dark hollows.

We did not finish our first day’s drive before he and his dad had words over pulling into a gas station, James yelling, “…no, no, no” at the direction Tim approached the pumps. We left without fuel. I wondered if we could be in the confinement of a motorhome for a month without killing each other. Still, I trusted.

We sped cross country, stopping for a couple of days in South Dakota. Tim and James each had bad days, and then worst days. After nighttime thunderstorms, we often awoke to a freshly-scrubbed world of fir-forested mountains back dropped by thick billowy clouds. In Wyoming, we looked out our wide windshield at hillsides with pockets of yellow flowers looking like throw rugs on green carpet. Lining clear streams, darker full-leafed cottonwoods contrasted the wrinkled landscape.

At Missoula, Montana, we left I-90 and took Highway 12 over the Lolo Pass, a scenic drive that often crosses trails the Lewis and Clark Expedition had traveled. The narrow two-lane highway wound between fir-covered mountains and beside clear rivers. We stopped for Tim and Carmen to splash in the crystal-clear water. Tim later confided that driving the curvy roadway with no side rails had made him nervous. I never had known my son to admit apprehension about driving any vehicle anywhere.

We reached the University of Idaho campus to the whoops and cheers of friends and fellow instructors who had arrived earlier. We backed into a space saved for us and set up housekeeping for the next two weeks.  Tim immediately made the couch into his bed. James slept in the bedroom. They both remained in bed for most of the daylight hours, making organization in the tight living space difficult.

Every evening, Tim made out a schedule of classes for the next day. But he never felt up to attending. As I watched him sleeping on the couch’s pull-out bed, a haunted emotion gripped my heart. His color was so dark, his face so gaunt, and his once broad shoulders, so thin his bones were outlined in the cloth of his tee-shirts.

I had arranged for James’ delivery of dialysis supplies in Idaho. On the afternoon, the delivery truck drove onto campus, Tim and James both slept behind drawn shades in the motorhome. The driver pulled up to our coach, lowered his lift on the truck, and suddenly out of nowhere, friends appeared. In relay-fashion, they stashed the bags of dialysate into cargo bins, broke down the cardboard boxes, and later delivered them to a recycling center.  Such is the concern and helpfulness of the RVing community.

The days passed with stress, strain, exhaustion, exhilaration, and rewards. In between taking care of James’ dialysis needs, I planned for classes on an as-needed basis. I felt unprepared due to the months of care giving that preceded the trip.

Sometimes,  I questioned my sanity in making the trip. Other hours, I wondered if I could survive the week of conference sessions.  But I did.  My classes, plus a Lifestyle Panel, went well. James and Tim were unable to attend a single one.

We made heartfelt goodbyes to our friends. Tim assured everyone he would be back the following summer. We began our overland trek back to Arkansas, stopping at Yellowstone National Park. As we drove toward Lake Hebgen, the views of snow-peaked mountains, a rushing river, and mounds of white clouds tinged in blue so excited Tim that he said, “I think we’ve died and gone to heaven!” He expressed determination to see Old Faithful, “…if it kills me.” Indeed, it almost did. He was extremely ill and suffered so much pain that particular day that he laid in the backseat of the van, a pillow pressed to his abdomen.

The trip back to Arkansas ended with the loss of only one side mirror, scraped off by a utility pole on a narrow street in Kansas City. Was I insane or brave in making this trip with my two sick men? I don’t know; probably both.  But by trusting that we could travel that distance and back, I gave my son beautiful memories of God’s amazing world.  He lived only six weeks after we returned home.

James and I continued to travel another year following Tim’s death. Yes, one can travel with a life threatening illness. It is not easy; it may not even be wise. But the memories made on these trips are forever.