You are here: Home / Blog / Great Escapes: Watchtower at Grand Canyon National Park
This post may contain affiliate links or mention our own products, please check out our disclosure policy here. 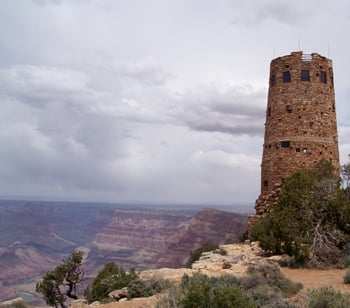 Nearly five million people visit the Grand Canyon each year, and most of them stick to the sites and trails near Grand Canyon Village. But about 30 miles east is a literal highlight you won’t want to miss— the Desert View Watchtower. Although it was built with an internal steel framework in 1932, the color and texture of the exterior stone blend in so well with its surroundings that you’d think it was an authentic ancient Pueblo Indian ruin. The Hopi paintings that adorn the interior help make the Watchtower and Kiva room (gift shop) feel much more real than re-created.

Hired by the Fred Harvey Company in 1901, Mary Colter is the architect and artist behind the 70-foot high Watchtower. She also created five other structures in Grand Canyon National Park, including the Lookout Studio, Bright Angel Lodge, and Phantom Ranch. Ms Colter extensively studied the architecture of the ancestral Puebloan people of the Colorado Plateau, and was skilled at using local materials to recreate rustic Southwestern style structures. Her attention to detail is evident, even if you didn’t know that she had hand-picked most of the exterior stones herself. Story has it that Mary had workmen completely re-do layers of rock that didn’t meet her exacting standards, even though they were already two stories high by the time she noticed a perceived flaw. 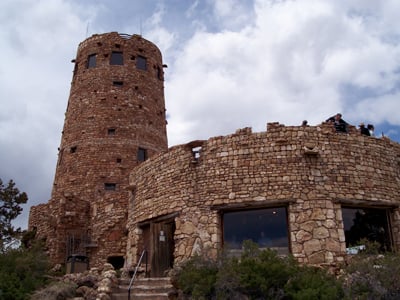 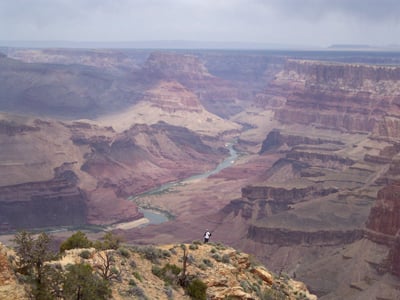 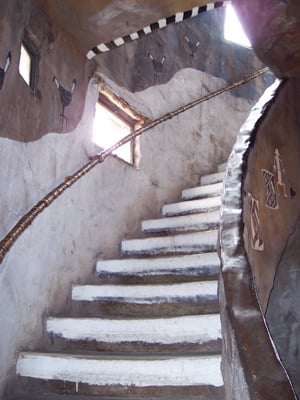 As you climb the tower’s 85 winding steps, notice the artwork that decorates the walls. The most distinct images, painted by Hopi artist Fred Kabotie, depict various aspects of Hopi mythology and religious ceremonies. The other murals were done by Fred Greer, and are copies of prehistoric pictographs. Ms Colter purposely left the top floor plain and unpainted, so as not to detract from the 360-degree view. From here, you can see the Colorado River make a big bend to the west as it snakes through the mile deep canyon. You can also see the north rim, which is 10 miles away. If you’re not up to climbing the tower, don’t worry about sacrificing the views. This site is perched at an elevation of 7,438 feet, so the panoramas are also fantastic from ground level. 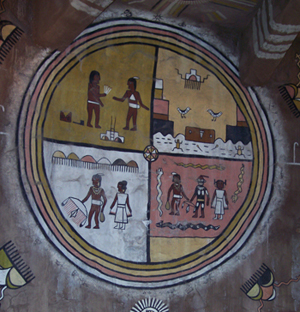 Entrance fee per vehicle is $25

Campground reservations can be made online through the National Recreation Reservation Service, or by calling 1-877-444-6777