You are here: Home / Blog / RV Travel Tales: The Flaming Gorge—America’s Desert Wildflower
This post may contain affiliate links or mention our own products, please check out our disclosure policy here.

Flaming Gorge National Recreation Area, one of America’s most scenic properties, is the nation’s wildflower.  Covering an insignificant circle of earth in the larger perspective of a United States map, this rumpled region off the beaten track in Wyoming and Utah is a land of contrasts and complements.  Drab desert vistas sweep to tall and weathered red mountains cloaked with dark green timber on all sides of a 91-mile expanse of lake water impounded by the Flaming Gorge Dam.  Sunlight and shadows play on rugged rock walls in a kaleidoscope of changing reds, oranges, purples, pinks, and grays.

Like the westward march of settlers, my late husband, James, and I had twice kept our course well to the north of the tumbled mountains and colored canyons. But on our third trek running west to east on I-80, we parked our rig at Green River, Wyoming, and planned a day trip into the National Recreation Area.   About 9:00 on an overcast morning, we started out on Highway 530 to drive the loop marked on a map with names memorializing people and places in the wild land’s early history: Dowd Mountain, Green’s Lakes, Black’s Fork, Lucerne Valley, Hideout Canyon, Dutch John Gap, Firehole Canyon, Squaw Hollow, Jessen Butte, Henry’s Fork, Minnie’s Gap, Antelope Flat, Mustang Ridge, Buckboard Crossing, Lonetree, Burntfork, and Sheep Creek Canyon.

Despite entering the Ashley National Forest, for the first miles, we saw no trees, only a desolate, wrinkled landscape, washed out and windswept in leaden gray that matched the sky.  On the paved road, we climbed a height that felt like the top of the world.  Vistas of canyons and peaks spanned the distance, all in muted earth tones. We pulled into a turn-out to capture in photos towering mountains, a backdrop to miles of sagebrush with a yellow-looking grass scattered in the sallow green. The distant mountains wore crowns of snow—or was it sand?  As we drove closer, I observed a few patches of smooth sandstone on a slope. Although snow was more likely, sandstone might have been on the faraway mountain tops.

Crossing the Black Fork River, the mountains were barren except for the ever present sagebrush.  Some of the formations took on the characteristic of pyramids. About ten miles from Manila, Utah, we crossed into open range.  Closer to Manila, we wound down a crooked road into Lucerne Valley with green grass.  Cedars showed up and some of the mountain tops looked like a dinosaur’s spine.

Going from Manila on Highway 44, we descended on a road slicing between mountains with red sandstone faces carved by Father Time and the harsh elements.  Scrubby cedars dotted the slopes.  A sign noted that Bighorn Sheep have been re-introduced to the area. Along the side loop through Big Sheep Canyon, a ground squirrel scampered across the road, the only wildlife we saw all day.

Some mountains rising from the canyon foundation appeared rutted and ribbed with rock out-croppings.  Others smoothed their faces with scattered dark green cedars.  Along the narrow canyon road, a few cottonwoods and stands of quaking aspen rustled thick foliage in a gentle breeze. Along a road pointing to Sheep Creek Ranch, we came upon an old homestead.  How lonely and isolated those pioneers must have been.  I wondered about the tales the old cabin’s walls could tell of mountain men, ranchers, housewives, merchants, and outlaws. The overlapping mountain facades contrasted in a corals and putty colored sandstone. Twisted cedar trunks growing stubbornly from the rocks exhibited the bruises of wind and a savage environment.  Farther into the geological area of Sheep Creek Canyon, tall cliffs rising from the canyon floor showed signs of mineral coloration streaking their indented faces. Bands of black ran like ribbons on some cliffs, while other rock shelves bore a blue gray tint.  A few lone cedars stood out on the ledges. Clear creek waters gurgled at the base.

Ahead, massive boulders appeared to teeter like a child’s tower of blocks.  I tried to imagine the forces that carved such formations; some rising in uniform layers reaching for the sky, others like an old furrowed face, and a few in tall and thin spires.  Along one slope, shapes reminded me of bacon strips, highlighted with colors of rusty orange and coral.  I wished for sunlight to play on the different textures.

Taller firs were more common as we climbed the mountain. Looking down from the narrow road which wound in overlapping levels, I saw aspens in a lush little valley. From our higher vantage point, the base of the mountain took on a fanning circular shape. Within a distance less than a city block long, the rocky walls changed from an up and down sweeping pattern to horizontal layers, and then to smooth sandstone.

Coming out of the Sheep Canyon side trip, we again picked up Highway 44, and headed south. At the sign for Red Canyon Visitors Center, we traveled a road carved from a mountainside of red sandstone. A short distance away at Canyon Rim, a campground and trail with three overlooks viewing the Flaming Gorge, proved to be the pinnacle of the tour for me. From the jagged shoreline of the emerald Green River, red sandstone rose in tall and craggy spires. Near the top of the weather-beaten mountain, dark green firs made a striking contrast. Walking the short trail to the middle overlook, the smell of cedars and sage mixed in a tantalizing scent of freshness and the outdoors.  We stood on the mount and watched boats below in the river.  Although we snapped pictures underneath the overcast skies, we envisioned the play of sunshine dancing in flamboyant colors along the walls of the gorge 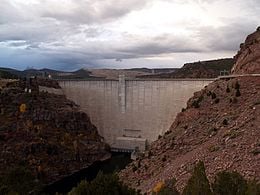 After leaving the Red Canyon area, we drove to the Flaming Gorge Dam Visitors Center, which remains open year-round.  A large mural of the dam covers one wall. A guided tour of Flaming Gorge Dam, itself a gem of engineering aesthetics, provided points of history for the 91-mile long lake formed in 1964 at the completion of the project. A topographical map at the Center outlined the entire Flaming Gorge National Recreational Area.  Overhead, a TV screen continuously played a video of the Recreational Area’s wide desert vistas held in check by thick forests of junipers, pinions, lodge pole pines and a few aspens for fall color.  Other hands-on visuals provided information on recreation, including camping, geology, back country hiking, some limited off-highway vehicle usage, fishing, wildlife observance, and outfitters for fishing and hunting.  A mounted Mackinaw trout, 51 pounds and 8 ounces, caught by 8 year old Kurt Bilbey, gave evidence to the potential for fishing in Green River waters. A theater previewed a film on interest points available to visitors, such as a tour at Swett Ranch, a collection of out-buildings that give a glimpse of ranch life in the early 1900s.

Returning to Rock Springs, Wyoming, on Highway 191, the eastern side of the loop, we marveled at the different rock formations.  One ridge looked like a plaster wall for a few hundred feet before turning into sandstone freckled with scrub cedar, then a stone wall with texture, but no vegetation.  On the backside, the sheer wall sloped with a covering of evergreens.

The drive back to Rock Springs passed through landscapes more beautiful and interesting than the drive down to Flaming Gorge from Green River.  Winding around the mountains, we overlooked a valley floor of red rock formations trimmed in dark green firs.  The sage covered mountains in the foreground fell into the red rock valley. Distant mountains in rusty red climbed high to green firs darkened to midnight blue in the late afternoon.  The indigo mountain range silhouetted a backdrop of hazy sky-dyed peaks.  Reluctantly, we left the wildflower called Flaming Gorge, leaving for another day a summer sunrise from atop Dowd Mountain, the granddaddy brown trout in one of the inlets, a full-throttle ride down the sedate Green River restrained by massive red rock walls, and nighttime gazing at stars in a chilled air.  But in just one day trip, we had met RVers who volunteered in the Recreation Area. We had listened to a breeze through the pine boughs, touched a cedar twisted by winter’s winds, inhaled the scent of sage brushing our jeans, and stared at the Uinta Fault and wondered about our own mortality.  In our imagination, our footsteps marked the Canyon Rim and our names were etched on the flaming rocks.