You are here: Home / Blog / RV Travel Tales: Queen Denver’s Court
This post may contain affiliate links or mention our own products, please check out our disclosure policy here.

Born in the fever of the great “Pikes Peak or Bust Gold Rush” of 1859, the wild and wooly settlement called Denver emerged from mud-filled streets. Local boosters named the frontier mining camp on the South Platte River “Denver” after Kansas Territorial Governor James Denver in hopes of gaining political favor. Unfortunately, the governor had retired by the time they named the town. Originally three separate towns, with three separate names, sprang up where Denver now stands. In 1859, the other names were dropped in return for a barrel of whiskey to be shared by all. Appropriate to the times and history, the first permanent structure in Denver was a saloon.

By the turn of the 20th Century, wealth from the mountains turned an unruly town into a “Queen City.”  Parks, fountains, statues, and Victorian mansions on tree-lined avenues brought respectability to the most elegant trade and cultural center within a thousand-mile radius. Located in the shadow of the Rocky Mountain Front, the Colorado capital’s climate is mild, dry and arid with annual rainfall comparable to Los Angeles. In summer, a dry humidity creates natural air conditioning. Between September and mid-October, nature’s paintbrush swipes splashes of brilliant yellows on aspen groves across the city’s Rocky Mountain backdrop. Yet, winter and springtime storms often drop several feet of snow on the city.

Still, summer is glorious with temperatures and more days of sunshine than Miami Beach; reasons enough for travel to The Mile High City. In a recent census, the 10-county Denver-Aurora-Broomfield, Colorado Metropolitan Statistical Area ranked as the 21st most populous metropolis in the United States. Several million visitors annually raise the population. Jo-Ann Carmack and I added to that number one summer as we visited with my nephew who lived in Aurora. Parked a bit north of the Queen City at a park that no longer exists, we spent several days lost while driving around to visit numerous sites in Denver. We discovered cultural attractions, sports, museums, shopping, dining, and magnificent scenery that provide leisure activities to suit varied tastes—both residents and visitors. Despite gunfighter Bat Masterson once guarding several of the boomtown establishments, modern-day Denver ranks high on the nation’s list of safest cities. And we felt safe—lost, but safe.

The cliché, “The best things in life are free…” might have originated with the city’s options for no cost and reasonably priced entertainment. Opened in 1919 in the heart of the city, Civic Center Park is the summer stage for numerous races and gatherings throughout the year. Upcoming on August 31-September 3, 2012, the Annual Taste of Colorado typically draws more than 500,000 people for this free, four-day festival on Labor Day Weekend. Over 50 area restaurants and food trucks offer diverse tastes of the city. On September 1, The Spin Doctors rock out their live music from the 1990s. KidzStage features magic, clowns, and puppets. Classic carnival rides will take generations back, perhaps, to some of the rides that we seniors remember.

On the summer day that Jo-Ann and I visited Civic Center Park, we walked for several hours around the sidewalks, admiring the buildings and landscaping. Surrounded by the Colorado History Museum, the Denver Public Library, and the Denver Art Museum, Civic Center is a floral summer showcase. The formal sculpture gardens and park are anchored by the State Capitol and the City-County Building, both open for free tours.  A spot on the west steps of the State Capitol, exactly 5,280 feet above sea level, proves that Denver is really a mile high. To be sure, Jo-Ann measured the steps—each a foot in height.

The Civic Center’s most popular attraction is the United States Mint. Free weekday tours beginning every hour on the hour summarize coin pressing from start to finish. Although the tours are free, reservations are required. A gift shop features unique and typically unavailable coins. A museum in the building traces the history of money. 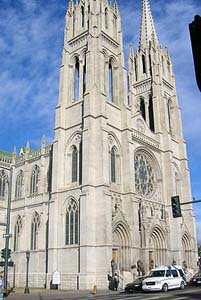 Begun in 1902 and completed in 1912, the magnificent French Gothic Cathedral of the Immaculate Conception traces its origins back to a tiny brick church completed in 1860 by a French missionary. At the time, there were 35 saloons, but only one other church in Denver. Open for scheduled tours, the ornate cathedral is appointed with marble from the famous quarry in Carrara, Italy, Colorado marble, granite and limestone, and various domestic and imported hardwoods. Seventy-five exquisite stained-glass windows from the Royal Bavarian Art Institute in Munich, Germany, depict in delicate beauty the life of Christ and other religious themes. Outside, twin spires rise 210 feet above the street.

Lower Downtown, or more fondly called LoDo by residents, is the oldest and original settlement of the city of Denver. It is a mixed-use historic district, known for its nightlife, and serves as an example of success in urban reinvestment. A revitalized warehouse district boast a lopsided share of trendy entertainment venues, art galleries, and restaurants. Union Station is Lower Downtown’s 17th Street anchor. Three-story-high arched windows flood sunlight into the great hall with 64-foot-high ceilings and massive oak benches defining the waiting area. Nostalgia-evoking railroad logos line the east wall, but now only Amtrak’s California Zephyr and the Winter Park Ski Train make regular stops. Denverites prefer hopping the train for a run from Denver to Glenwood Springs. Passenger trains also run through The Royal Gorge on a daily basis.

As the destination neighborhood in Denver received new life in preservation of its structures, the Wynkoop Brewery opened and Coors Field rose in 1995 on the edge of the LoDo Historic District. In 2000, Pepsi Center opened on the opposite side of the old neighborhood, further raising its image as a haven for sports enthusiasts.

With 300 days of sunshine a year, Denver is a sports capital. Denverites—and their visitors—love the outdoors. And the Queen City provides ample opportunities to participate in individual sporting activities or as spectators in professional arenas. Numerous golf courses in the area and more than 100 free tennis courts champion individual participation. The 18-hole regulation City Park Golf Course is located only five minutes from downtown in an urban setting with views of downtown Denver and the Rocky Mountains. In addition to Pepsi Center and Coors Field, Mile High Stadium and INVESCO Stadium support the NBA Denver Nuggets, the NHL Colorado Avalanche, Major League Baseball’s Colorado Rockies, and the NFL Denver Broncos. The city also boasts major league soccer with the Colorado Rapids, the National Lacrosse League with Colorado Mammoth, and the Glendale Raptors Rugby Club.

City Park is one of 200 parks inside the city limits. A mile long green belt of lush landscaping and colorful flowers stretches across more than 320 acres. Paths beckon leisurely walkers, skaters, and bikers. Within City Park’s boundaries, the Denver Zoo, Colorado Museum of Natural History, an IMAX Theater, and Gates Planetarium, complement a restored 1896 Pavilion with a bandstand and snack bar. During summer months, paddleboats on Ferril Lake are available for rent.

Back in 1870 before the unruly gold rush town had schools or hospitals, performances of “MacBeth” sold out. Today, the Denver Performing Arts Complex stages entertainment from symphony music to regional theatre to Broadway productions.  Thirty other theaters and over 100 cinemas emphasize Denver’s love affair with the arts.

Red Rocks Amphitheater, north of Morrison, sets between towering 400-foot-high sandstone rocks at Red Rocks Park. Its natural sandstone formations and inherent acoustical qualities are as legendary as its concerts under the Colorado sunshine or beneath a canopy of stars. The view of Denver’s skyline across the Rocky Mountain’s plains sometimes extends to the white canopy of Denver International Airport.

Cherry Creek State Park, Denver’s backyard playground, offers unlimited recreation anchored around an 850 surface acre lake. In the midst of an urban area, the state park offers a natural prairie environment of gentle, rolling hills and complete outdoor recreation facilities, including RV full-hook up accommodations. Chatfield State Park is located just outside the Denver Metro area in rolling hills and on an expansive reservoir. The campground offers full-hook up sites and numerous pull-throughs. Reservations are recommended.