You are here: Home / Blog / Great Escapes: Smith Rock State Park
This post may contain affiliate links or mention our own products, please check out our disclosure policy here. 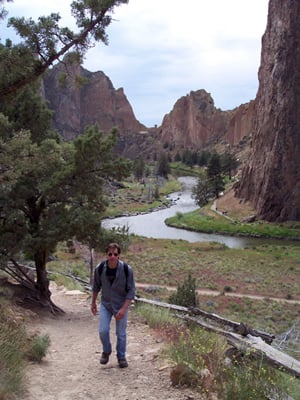 Known as the birthplace of sport climbing in the United States, with over 1,000 designated routes, Smith Rock State Park in Terrebonne, Oregon draws world-class climbers— and those who like to watch them in action. Everywhere you look, you’ll see limber souls scaling rock faces that bear amusing monikers such Monkey Face, Kiss of The Lepers, Thieves Like Us, Fish ‘n Chips, and Slab Happy. The scenery at Smith Rock is also world-class. Flanked by juniper, sage, and pines, the aptly named Crooked River winds around the base of the volcanic rock towers. Golden eagles and prairie falcons fly overhead; and it’s all back dropped by several snow-capped Cascade Mountain peaks. Spectacular!

Although Smith Rock State Park is a mecca for hard-core rock climbers, if you’d rather not get roped into anything, you can bike or hike instead. From the parking lot, you can stroll along a flat trail for the best mountain views. Benches are conveniently placed so you can sit and watch the climbers. You can also head downhill a bit to hike along the Crooked River (watch for deer, otters and beaver, as well as rattlesnakes), or choose a challenging rocky trail that heads UP from the river. Warning— the steep Misery Ridge comes by its name honestly, but the views are worth it! 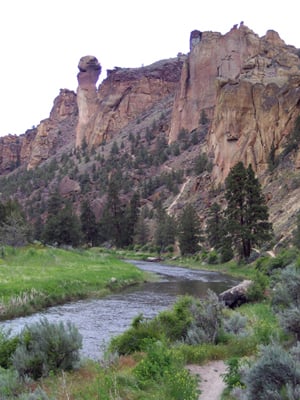 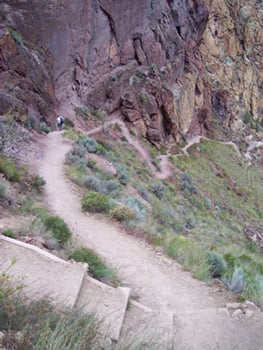 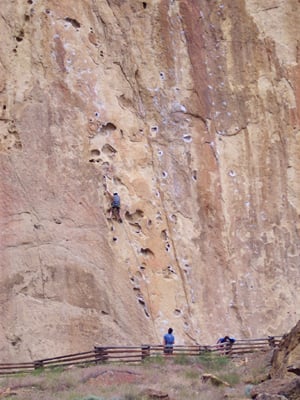 If the surroundings look familiar, you might recognize it from Hollywood movies. Several westerns have been filmed at Smith Rock, including Rooster Cogburn, a 1975 film starring John Wayne and Katharine Hepburn. Some scenes from the 1997 feature The Postman were shot here, and Smith Rock also appears in Swordfish (2001).

Even if you don’t know a belay from a biner, just bring your camera and take in the high desert scenery at Smith Rock State Park. You may just be inspired to take your sight-seeing to a new height!

Walk-in tent camping only; no RVs.