You are here: Home / Blog / Great Escapes: Bannack State Park
This post may contain affiliate links or mention our own products, please check out our disclosure policy here.

Bannack is the city of many “firsts” in Montana’s state history. It was the first territorial capital, had the first jail, hotel, and chartered Masonic Lodge. It also had the first hard rock gold mine and electric gold dredge. One of the most unusual firsts about this ghost town is that its infamous sheriff was secretly the leader of a gang of robbers and murderers— that is until citizen vigilantes hanged Henry Plummer and his followers on the gallows in town. If you’d like to learn more about these “firsts” just visit Bannack State Park. Over 60 buildings remain in this ghost town, and most are so well preserved that you can actually go inside them— a rare treat when it comes to ghost gowns. Here’s a quick tour of a few of the most interesting and notable buildings you’ll find by strolling the boardwalk at Bannack State Park: 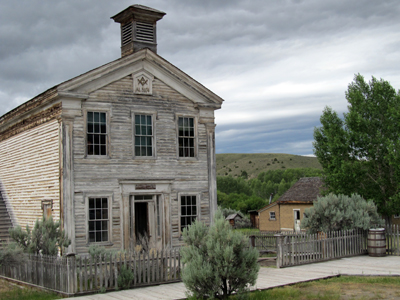 Bannack Historic Lodge 3-7-77 was built in 1874 at a cost of $1,500. The first floor was a school for students K-8th grade for over 70 years, closing in the early 1950s. Take a seat and see if you can answer the questions written on the chalkboard. The lodge is on the second floor. Although you cannot tour the upstairs, you can look inside and see the original carpet, and the historically correct arrangement of furniture and equipment for the time period. 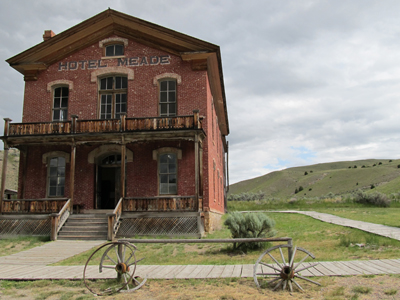 Built in 1875 for $14,000 as the Beaverhead County Courthouse, this was the first brick courthouse in Montana. The county seat was moved to Dillon in 1881, so the building sat empty until about 1890 when Dr. John Meade purchased it for $1,250 and remodeled it into a posh hotel. Wander through the rooms and up the spiral staircase for a great view of the town through the upper windows. 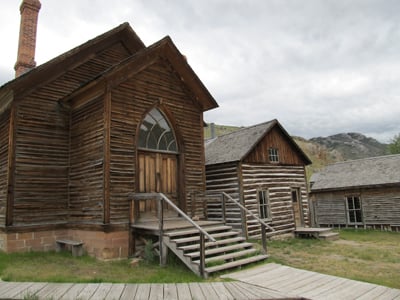 The Methodist Church was built in 1877, fifteen years after the founding of the community. A traveling minister, William Wesley Van Orsdel, or “Brother Van” was responsible for promoting the need for the first and only church in Bannack. 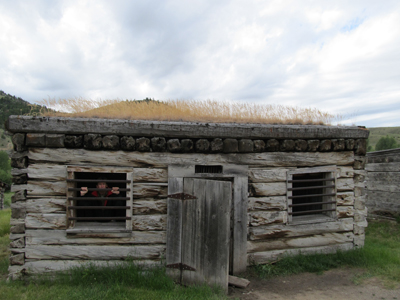 Although Bannack was home to the state’s first jail, not many offenders were kept here. With the gold rush at its peak, no one wanted the job of guarding prisoners—so most were warned, banished from town, or hanged.  For those who were incarcerated, the gallows were in plain sight out the barred windows! 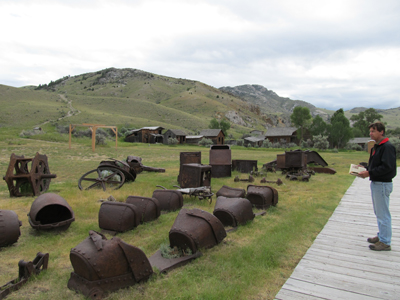 The mining exhibits found along the boardwalk represent all of Bannack’s major mining boom periods, from the first major discovery of placer gold in Grasshopper Creek in 1862, until WWII when all non-essential mining was prohibited. After the war, placer and hard rock mining continued. In fact, Montana’s nickname is “The Treasure State” thanks to its mountains having yielded fortunes in gold and silver since the mid 1800s. 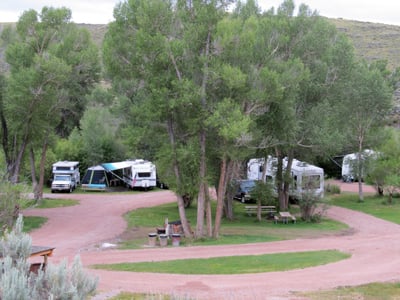 Bannack has 2 primitive campgrounds with picnic tables, fire rings, vault toilets and water, but no hook-ups or dump station.

Take Interstate 15 south from Dillon to exit 59 (Hwy 278 exit). Head west on Hwy 278 for about 20 miles. Turn south onto the paved Bannack road and drive 4 miles, then turn left onto the gravel park entrance road. Pay $5 per vehicle admission at the Visitor Center.