You are here: Home / Blog / Great Escapes: Natural Bridges National Park
This post may contain affiliate links or mention our own products, please check out our disclosure policy here. 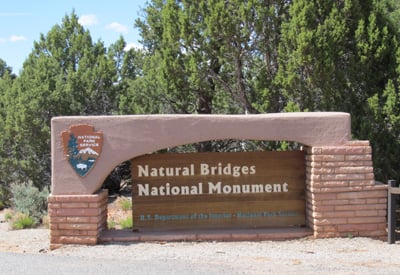 Many times it seems that the best scenery or natural features are found at the summit of a steep mountain, the bottom of a deep canyon, or at the end of a rugged hiking trail —all requiring a lot of time and effort. Not so at Natural Bridges National Park! Hiking trails lead right to the sandstone spans if you prefer, but for “windshield tourists” or visitors short on time, you’ll really appreciate this small park—viewpoints for all three natural bridges are located along a nine-mile, paved loop road. Simply pull over, walk a short distance to the overlook for a peek and a picture, and continue along Bridge View Drive to the next scenic stop. About two hours is all you’ll need to cover the highlights, including a stop at the visitor center for a map and brochure.

Although they may look similar, did you know that the difference between natural bridges and natural arches is the way they were formed? Natural arches are created through frost, wind and other means of erosion, and are generally not found near water (think of Arches National Park near Moab, Utah). Natural bridges, however, are made by moving water and usually straddle a river. In fact, it was a mighty river that indirectly led to the discovery of the park’s stone bridges. In 1883, a prospector wandered up White Canyon from his base camp along the Colorado River in search of gold. What Cass Hite found instead of nuggets were three spectacular spans that water had sculpted from stone. At first, these bridges were called President, Senator, and Congressman in order of height, but years later they were given much more appropriate Hopi names. 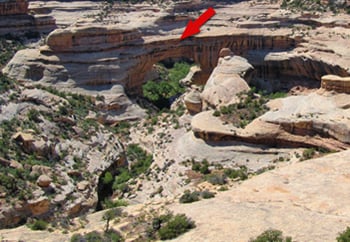 At 220 feet high and 268 feet long, Sipapu is the highest and biggest of the three natural bridges in the park. Despite its bulk, it is a bit hard to differentiate Sipapu from its natural environment— the beige sandstone is well camouflaged against the surrounding desert landscape. Sipapu means “the place of emergence,” and was named for the entryway by which the Hopi Indians believe their ancestors came into this world. 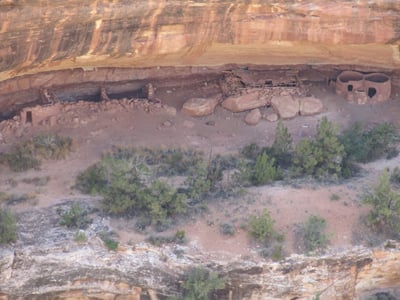 While admiring Sipapu Bridge, don’t overlook the nearby Horse Collar Ruin—one of the best-preserved ancestral Puebloan archeological sites in the area. From the overlook, binoculars or a good zoom on your camera will bring the distant cliff dwelling into focus. The ruin is comprised of a rectangular kiva and two granaries with unusual circular doorways that resemble horse collars, hence the name. Native Americans last lived here over 700 years ago, but amazingly the kiva has a nearly intact roof. A rarity indeed. 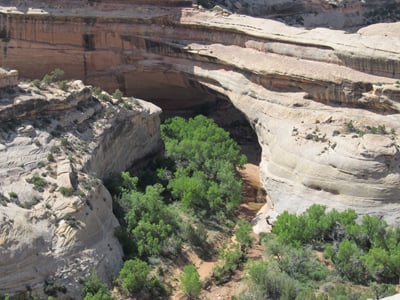 210-foot high, 204-foot long Kachina was named for the rock art found on the bridge depicting dancing figures and symbols commonly found on kachina dolls. You’ll have to hike down to see the glyphs, but even if you don’t, the view of this bridge from the overlook is pretty impressive. Kachina continues to be enlarged by the floodwaters of White Canyon, but since it is 93 feet thick, it’ll probably take a very long while before there is any noticeable erosion—that is unless more rock falls off of it. In 1992, about 4,000 tons of sandstone fell from the inside of the bridge opening. 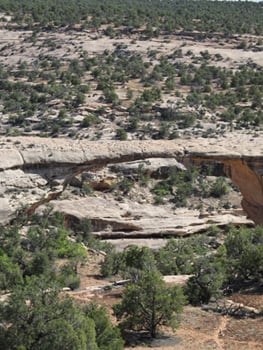 Owachomo is the oldest and smallest bridge in the park. Its Hopi name means “rock mound,” a feature atop its east abutment. Owachomo is 106 feet high, spans 180 feet, and at only nine feet thick, is very thin compared to its neighbors. Streams no longer erode this bridge, but frost action and seeping moisture do.

Although Native Americans occupied the area off and on until the 1300s, the general public has only known about these three bridges since 1904, thanks to National Geographic Magazine. Over 100 years later, visitors continue to marvel at the two deep canyons, three massive sandstone bridges, and Puebloan archeological sites in Natural Bridges National Park. Only Mother Nature knows how long these treasures will stand the test of time, but hopefully they will remain rock solid for future generations to enjoy.

The entrance to Natural Bridges National Park is at the end of Highway 275, which is roughly 35 miles west of Blanding, Utah on Highway 95. Driving time from Blanding is about 45 minutes.

Entrance fee for private vehicles is $6 (good for 7 days).

The first-come, first-served campground at Natural Bridges National Park has 13 sites with fire grills, picnic tables and pit toilets (no hookups). Maximum RV length is 26 feet. No water in the park other than at the Visitor Center.