You are here: Home / Blog / Boondocking Blast!
This post may contain affiliate links or mention our own products, please check out our disclosure policy here.

by Dave Helgeson
September 11, 2012Filed under: 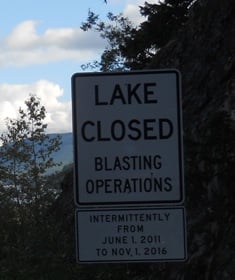 I recently traded tow vehicles and was anxious to try out the towing capabilities of the new truck via a short trip to the mountains before setting out on a longer excursion. I selected a place to boondock for the night by a mountain lake not too far from home. Upon arrival we were met with this rather ominous sign stating, “Lake Closed Blasting Operations”! The scheduled blasting pertained to the widening of the freeway across the lake. Determining that camping was still permitted we parked with a view of the lake and settled in. Later that evening as we were enjoying dinner and the view of the lake, we watched as the freeway closed to traffic. Keeping a keen eye on the construction zone we were soon treated to a free fireworks show as the blast was detonated. Rocks slid down the hillside and dust rose into the air quickly enveloping all lanes of the freeway. Seconds later the air crackled from the sound of the explosives followed by the rumble and echo of tons of earth being liberated from the hillside. For us it was an enjoyable adventure in RVing. For the RVs stuck in the mile long backup caused by the freeway closure, it was anything but!