You are here: Home / Blog / RV Travel Tales: Students Contribute to Ecology–and Our Enjoyment
This post may contain affiliate links or mention our own products, please check out our disclosure policy here. 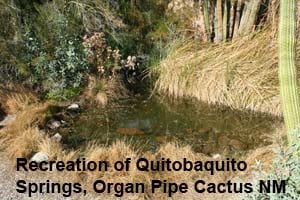 In 2005, 160 science students from Ajo Middle School in Ajo, Arizona, studied the habitat of Quitobaquito Springs, natural warm water springs under a sunshade of mesquites in the wilderness of Organ Pipe Cactus National Monument. The students collaborated on a design plan and physically built the refuge habitat, La Cienga, at the Visitor Center. Each class was responsible for one piece of the ecological puzzle. They worked together to create a miniature, but complete, habitat before they transferred 239 of the endangered species called pupfish.

Known to the O’odham people as “Little Wells,” the springs now number two reliable ones and a few more appearing now and then, obvious only when lush green hangs overhead. The O’odham and their ancestors have camped at that spot for centuries. The  springs were on the trail to everywhere and welcomed by the ancients as a paradise in a parched and sun-baked land. Although not suitable for bathing, Quitobaquito Springs also served as an oasis for early Spanish explorers, prospectors, and travelers following the dangerous Camino del Diablo (Devil’s Highway) from Sonora to Yuma.

On October 26, 1976, Organ Pipe Cactus National Monument was designated an International Biosphere Reserve, one of numerous projects worldwide of Man and the Biosphere program of the United Nations Educational, Scientific and Cultural Organization (UNESCO). Reserves are protected samples of the world’s major ecosystem types. These sites are standards against which scientists can measure human impact on our environment and predict its probable effects. Also on October 26, 1976, Congress designated 95% of Organ Pipe Cactus National Monument’s 330,000 acres as wilderness. An unexpected green patch of Sonoran desert populated by barrel, saguaro and organ pipe cacti, Organ Pipe Cactus National Monument bumps against 30 miles of the U.S.-Mexico border. These are essentially unspoiled lands: no roads, no permanent structures, and areas where Man is a visitor who does not stay.

In 1978 Quitobaquito Springs was placed on the National Register of Historic Places. In 2001 Organ Pipe Cactus National Monument (specifically Quitobaquito Springs) and nearby Cabeza Prieta National Wildlife Refuge were declared Globally Important Bird Areas (IBA) by the American Bird Conservancy. Heron, killdeer, and ducks rest at the springs on migratory flights. White-throated swifts, black phoebes, and purple martins live around the pond throughout the year. Most species of mammals who reside inside the boundary of the monument have been sighted at one time or another. Almost half of the monument’s plants grow nearby.

The springs are part of the 69 percent of remote border park west of Tucson that has been closed to the public since the tragic death of Kris Eggle, a 28-year-old law enforcement park ranger, who was shot and killed while pursuing armed drug runners in 2002. Since 2009, the park has offered van tours to the springs, as long as rangers armed with rifles protected the visitors. In March 2012, ten years after Eggle’s murder, the park’s leadership opened up a portion of the closed areas to the public, citing improved safety conditions and a big increase in Border Patrol agents in the area. Visits to Quitobaquito Springs are restricted to tours with trained rangers. 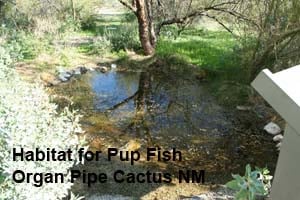 However, in the oasis reproduced at Organ Pipe Cactus National Monument Visitor Center, the students from Ajo Middle School give visitors a taste of the peaceful beauty of the springs—without the hike or van ride through the wilderness. The students concentrated on creating an environment for the pupfish in the small pond on the nature trail at the Visitor Center. Originally, pupfish lived throughout the Southwest in rivers, streams, and lakes. Some even lived in the Gulf of California, the Colorado River, and the now dry Lake Manly, which once covered part of Death Valley. As the waters receded after the last glacial period, pockets of pupfish were left behind in headwater springs and feeder streams. Each surviving group then evolved to fit to its changing surroundings. Pupfish breed quickly, so generations may quickly adapt. In Quitobaquito, pupfish may even be different than ones still struggling in the intermittent Sonoyta River, only a quarter mile south of the pond created by the springs. 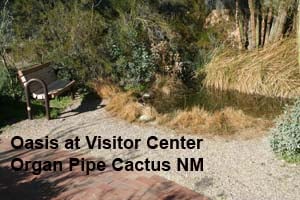 In the pool at Quitobaquito Springs, the tiny fish are captives, held by time and circumstances when the Sonoyta River meandered south. The pool can vary in temperature from 62 to 106 degrees. The water mixes daily and is less salty than seawater. Yet, the fish have to adapt and are better at surviving physical extremes than competing with other fish or predators. In other locations, catfish, shiners, and dace have wiped out populations. The pupfish at Quitobaquito Springs are the only natural population in Arizona. The students’ work at their reproduced environment, La Cienga, continues as they monitor water quality and prepare statistics. And we, the visitors, have the opportunity to sit on a bench, embrace the peacefulness of a desert oasis, and observe these little fish whose species has survived for centuries. We have the opportunity to see the thumb-sized rounded bodies of pupfish dart through shallows or tread idly in any current in the water in the oasis reproduced at  the Visitor Center. Who ever said that our nation’s young people lack in commitment and inventiveness—or concern about the ecology of our planet?

Note: In January 2012, Lee and I spent several days in the pristine campground at Organ Pipe Cactus National Monument. We took a ranger-guided van tour into the Ajo Mountains. Lee hiked alone to Victoria Mine. We felt safe. Volunteer Workampers told us that they felt safe to live in the park for several months at a time. Park Rangers concurred that the park is safe to visit. For more information on the safety concerns as reported in 2012, go to http://news.yahoo.com/blogs/ticket/fighting-drugs-border-violence-arizona-organ-pipe-cactus-132342614.html