You are here: Home / Blog / RV Travel Tales: The Word “Work” is Part of Workamping
This post may contain affiliate links or mention our own products, please check out our disclosure policy here.

In the current issue of Workamper News®, Steve Anderson, President and Director of Possibilities, wrote on the topic of “work” in Workamping. The founders of Workamper News, Greg and Debbie Robus, created the concept and the title for RVers who want to seek employment or volunteerism as they travel.  Workamp and Workamper are both registered names, as well as the company’s name, Workamper News®, which now encompasses a myriad of services to the RVer who wants to earn a few extra dollars or some amenities. 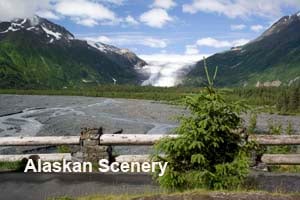 Steve’s mention of “work” relating to Workamping brought to mind the attitude and grumbled words of some RVers I have approached at trade shows or RV rallies, hoping to introduce them to the possibilities of finding jobs or volunteer positions as they travel. I’ve heard everything from “…work? That’s a four-letter word!” to “I’m retired. I don’t do work!” Yet, numbers of others—sometimes even those who looked forward to not working in retirement—discover they need a reason to get up in the morning. Still more need the supplement of extra dollars or amenities to live their dreams on the road. The reasons for Workamping are as diverse as the RVers out there traveling around our country. And the benefits go beyond dollars, discounts in campground stores, and free propane. In the seminars I present about the Workamping lifestyle, I always tell participants: “Workampers often get to live on America’s prime property. Even those who vacation in our state and national parks and public lands have a limited time to visit. But the RVers who take a job or a volunteer position get to actually live for a whole season in the midst of some the world’s finest natural beauty.”

One example of Workampers who embrace the word “work” is the employees of Corrington Enterprises in Skagway, Alaska. Corrington Enterprises, a business owned by Dennis and Nancy Corrington, stands in the center of Skagway’s business district in five separate store locations. Workampers staff their stores, working 40-hour weeks, but enjoying hours after work and on days off to hike, fish, and kayak. Skagway boasts no malls, McDonalds, Wal-Marts, or movie theaters. Yet, there are many tours, such as helicopter and sea tours, and the White Pass & Yukon train trip to Whitehorse.  Early in the season, those companies often offer discounted tickets as they train new people.

Corrington Enterprises furnishes its Workampers with parking sites in an exclusive RV park located alongside the rushing Skagway River with tall mountains rising on either side. When Workampers arrive in the spring, snow is still on the mountaintops. Often, they see wildlife. One summer, a grizzly mom with two cubs moved in and out of the park. The company also built a clubhouse for the Workampers’ use for potlucks and socials. 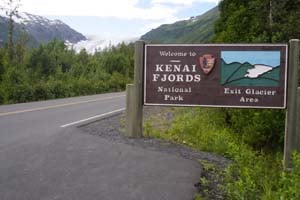 James and Vicki Berry have the best of two worlds, spending summers Workamping on the Kenai Peninsula of Alaska while working for Kenai Princess Wilderness Lodge and then, soaking up Arizona sunshine and desert scenery during their winters. With a commercial drivers license (CDL), James qualified as a shuttle driver for Princess Wilderness Lodge. He also sells land tours for hiking, fishing, horseback riding, carriage rides, husky sledding dog shows, kayaking, rafting, and Kenai Fjords whale sighting/glacier watching tours. Then he transports guests from the Princess Resort to their launch spots and picks them up when their activity is complete. As he drives, he uses his winning personality to narrate, giving tidbits about history and scenery along the route. For one year, Vicki worked in housekeeping at the Lodge.  However for the past several summers, she volunteered for the museum in Cooper Landing and twice weekly led an exercise class called “Strong Woman” at the senior housing.

John and Grace Schafer from Ames, Iowa, took in totally different views of America scenery at Casa Grande Ruins. The National Monument at Coolidge, Arizona, and the ancient culture of the Hohokam people, who lived and developed a sophisticated culture in the desert from approximately 300 BC until 1450 AD, intrigued the retired Iowa educators. Perhaps, more than intrigued them. They soon recognized a passion for the people whose name means quite simply “those who have vanished.”

“We don’t play bingo and we don’t golf, and there are just so many potlucks that we want to attend,” Grace said with a laugh. “Immersing ourselves in the culture and history of this magnificent site gives us something productive to do.”

While at Casa Grande Ruins, working as National Park Service interpreters three days a week, they lived with four other RVing couples in a campground set aside for volunteers. Upon their acceptance as interpreters, the Casa Grande staff asked the Schafers to read, read, and read, and then build their own presentations for guided tours of the ruins, more literally translated as the Great House. Grace says that each volunteer interpreter researches and selects his or own focus for a 90-minute presentation. While John emphasized the agriculture aspect of the ancient Hohokams, Grace found her heart connecting with the people and their daily life in the harsh desert.

Workamping is a ticket to unexplored places and new experiences. Sometimes, that ticket is a volunteer position; other times, it’s a paying job. One autumn, Lee and I paid for our “ticket” to Bar Harbor, Maine, with a 40-hour-a-week job at Coastal Kayaking/Acadia Bike. Both a town and a fishing village, the charming Maine coastal port with a history of attracting rich folks in the early 1900s, accommodates today’s tourists with lodgings, restaurants, activities, and shops. We found our work location on Cottage Street.

Situated on Frenchman’s Bay, the mountains of Acadia National Park surround Bar Harbor on three sides. Remnants of the so-called cottages of the rich line the harbor’s coast and dot the small town; most of the stately mansions are now converted to inns.  Many of the two and three-story houses succumbed to a devastating fire in 1947. Others were torn down after the national income tax prohibited their costly maintenance. 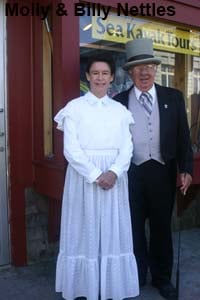 On our first day at work, a gentleman in a formal morning frock with tails and top hat greeted us in a pronounced South Carolina drawl. His wife, attired in a long dress and white apron, also welcomed us. These co-workers, Billy and Molly Nettles, guided Victorian walking tours around town for clients arriving on the cruise ships. When finished with their tours, they worked with me behind the desk, renting bicycles and kayak tours. Billy and Molly were our neighbors in the RV park where we lived for our six week stay. Some evenings around Billy’s campfire, we feasted on fresh steamed lobster. On days off, our jobs gave us the perk of picking up a bicycle and riding the Carriage Roads of Acadia National Park. While we did not profit monetarily from the job due to our short stay, our wages helped pay expenses to experience autumn in New England.

The opportunities across our nation to live on prime property and soak up breath-taking scenery are abundant. To many of us, the word “work” simply means a ticket to places we could not otherwise afford.